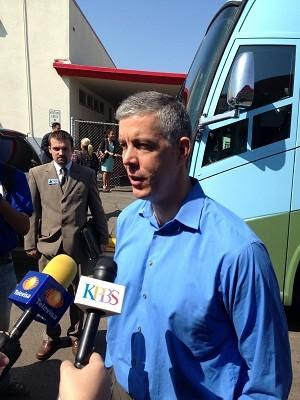 September 15, 2013, 10:40 a.m.  ::  U.S. Secretary of Education Arne Duncan toned down his recent criticism of California in an interview with The Times, calling his previous threat to withhold federal funding from the state over a new plan to test students a "last resort."

He also praised the efforts of California and specifically Gov. Jerry Brown to adopt high academic standards and move quickly to new and improved standardized tests.

But there is still no immediate resolution to a looming impasse between the state and federal governments over the testing plan for 2014.

Over Duncan's objections, the state Legislature last week approved Assembly Bill 484, which authorizes school districts to shift quickly to new computerized tests that would be based on learning goals, called the Common Core standards, adopted by 45 states.

At the same time, the bill ends funding for the standardized exams used since 1999. There would be no scores available because the new test is going through a trial period. The bill would permit a further postponement of scores, if needed, for 2015. The bill has now gone to Gov. Brown, who has indicated his support.

Duncan, who supports Common Core efforts, had insisted that providing test results is necessary to keep parents informed. He said such data also is vital to determine whether teachers and schools are successful. With the bill before the Legislature, Duncan had called its provisions unacceptable due to the lack of test results. The Legislature easily passed the bill anyway.

But California is not the only state moving in this direction, and in the interview Duncan said he accepted that results would not be available from a test that is still in development.

"That makes sense," Duncan said. "It’s a time of transition. It may not be ideal as we move to this next generation of assessments, having those scores. We understand that may be part of this transition process.”

He added: "I recognize it will be a little bumpy. We’re wildly encouraged on where people are trying to go. By definition transition is hard, it’s difficult, so we understand that."

Duncan's department and California have been at odds periodically, over the high-profile Race to the Top grants and waivers from onerous provisions of the federal No Child Left Behind law. The state lost out on both because of its unwillingness to mandate the use of standardized test scores in teacher evaluations.

The current dispute has the highest stakes — federal funds typically make up about 10% of school district budgets, accounting for about $600 million in the Los Angeles Unified School District, for example.

Duncan spoke as he was wrapping up a cross-country bus tour of school systems. The tour ended Friday at a middle school in Chula Vista.