Bill in response to an L.A. Unified scandal, requiring timely reporting of teacher discipline, is among 55 signed by Gov. Jerry Brown 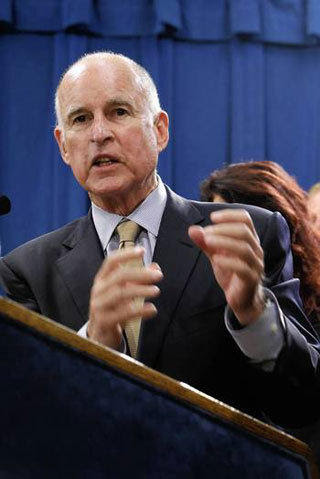 << Other measures Gov. Jerry Brown approved — 55 in all — are aimed at providing the public with more information on local government actions and at protecting animals. The bills take effect Jan. 1. (Rich Pedroncelli, Associated Press / August 27, 2013)

September 6, 2013, 9:24 p.m. : SACRAMENTO — Gov. Jerry Brown on Friday signed a bill that will penalize school superintendents who fail to report to the state when teachers are disciplined or fired for misconduct.

The measure was a response to a sex abuse scandal in the Los Angeles Unified School District.

Other measures Brown approved — 55 in all — are aimed at providing the public with more information on local government actions and at protecting animals. The bills take effect Jan. 1.

The school bill requires superintendents to report actions against instructors to the state Commission on Teacher Credentialing within 30 days. Failure to do so would be "unprofessional conduct" subjecting the administrator to possible penalty by the commission. Those "refusing or willfully neglecting" to report actions against teachers will face possible misdemeanor charges, with fines up to $1,000.

"The bill will help keep students safe by requiring all school superintendents and administrators to report teacher misconduct in a timely fashion," said Jim Evans, a spokesman for Brown.

The measure was filed after a sex abuse incident involving a teacher at Miramonte Elementary School in Los Angeles and a state audit finding that L.A. Unified failed to report at least 144 cases of teacher misconduct when required to do so.

Thirty-one of the cases were reported three years late, the audit found. As a result, the state was not able to review teachers who may have been unfit for the classroom, said Assemblyman Al Muratsuchi (D-Torrance), author of the bill, AB 449.

If the state is unaware of problem teachers, it cannot take away their credentials, which means they can still get jobs in other districts in California, Muratsuchi explained: "This is a step forward, ensuring the safety of our children."

In a letter urging Brown to sign it, UTLA President Warren Fletcher wrote that it would "ensure district superintendents are held accountable."

The governor also signed legislation expanding the state's open-meetings law by requiring local legislative bodies to publicly report the individual vote or abstention of each member in open session.

The bill applies to entities including regional transportation boards and groups such as the Southern California Assn. of Governments. City Councils already are subject to the bill's requirement.

Currently, the boards must publish only the total number of votes, rather than the votes of individual board members. "When public officials vote on how to spend public dollars, they must be accountable for how they vote," said Sen. Leland Yee (D-San Francisco), author of SB 751.

Another bill that will now become law applies to the Department of Fish and Wildlife. When responding to a report of a mountain lion sighting, officials must use nonlethal methods, including capturing and tranquilizing, to remove the animal if it has not been designated as an imminent threat to the public. Sen. Jerry Hill (D-San Mateo) introduced the measure, SB 132.

The sale of animals at swap meets and flea markets will be barred under another measure Brown signed, unless the local jurisdiction adopts animal care and treatment standards to prevent inhumane conditions.

"Animals are currently being sold at flea markets and swap meets in often abysmal conditions, where there is no legal oversight of the seller and no consumer accountability," said Assemblyman Roger Dickinson (D-Sacramento), author of AB 339.

AB 449 is a slap directed at Superintendent Deasy.

That alleged failure was illegal then – with the potential penalty of the superintendent – as the mandated reporter -  losing his credential. That was the action threatened in the commission’s letter  of Feb 15, 2012[http://bit.ly/1aVnxJF].

This law,  if anything, lowers the penalty.