Once Broad alumni are working inside the education system, they naturally favor hiring other Broadies, which ups the leverage…" — Sharon Higgins 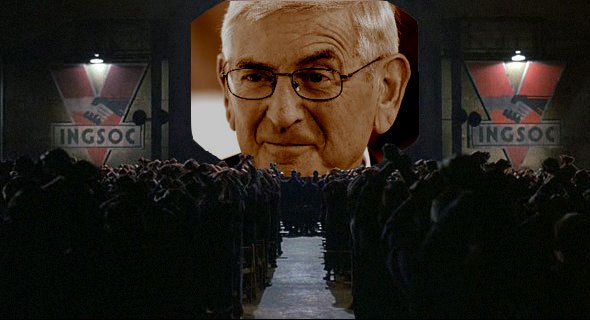 [●●smf, on the image above: CALL THE IRONY POLICE! - One wants to see the young woman run down up that aisle and toss the hammer that shatters the screen – a trope not from the Orwell novel or any of the movies of 1984 – but from an Apple Commercial, directed by Ridley Scott, that ran at the 1984 Supebowl. ]

14 September 2013  ::  While Los Angeles' corporate media bemoans scoundrel Jaime Aquino's resignation, replete with descriptions of tears from fellow Broadyte John Deasy, there are other voices that see the fall of one of Eli Broad's key chess pieces as an opportunity to demand genuine community input into the hiring of high level administrators running 333 S. Beaudry Avenue (aka Broad's Eastern Palace). Joining Forces for Education, an organization formed in response to Ben Austin and Parent Revolution's vicious attack on the former Weigand principal, issued a powerful statement and call to action today in response to Aquino's resignation.

I'm including the unedited letter from Joining Forces for Education in its entirety here. This needs to be disseminated far and wide. Their call not only for community participation, but for and end to Deasy's abject reign dovetails neatly with the LAUSDHope Campaign to remove Deasy and give the public authentic input into his successor.

Time is of the Essence to raise public voices in the choice of new senior LAUSD administrators.

With the resignation on Friday, Sept. 13.  of Asst. Supt of LAUSD, Jaime Aquino, we, the public, have an opportunity to influence the hiring of new administrators.

Since Supt. Deasy will be evaluated by the Board at their next meeting, and his contract is in real jeopardy due to the iPad fiasco for which we California taxpayers will be on the hook for decades, possibly a search will be made for both a Supt, and an Asst. Supt.  There will be a closed meeting this Tuesday of the LAUSD School Board, at 200 S. Beaudry Street location.  Some people have asked me to announce that a community group is forming and will be on the sidewalk with signs and handouts.  Any readers here who are with media, please note this, and readers feel free to send this entire email to others.

When Supt. Deasy was hired, we know there was no search and no competition. Eli Broad mandated to the Board that they hire Deasy, and they did and Aquino was their choice for second in command.  Now we have a new composition on the Board who could be better overseers of public schools and taxpayer money in the future.

With all the Deasy messes at LAUSD,

....and his questionable PhD credentials, and his work for the privatizers like Broad whose Academy trained and graduated him, and Gates who hired him for a short time....

....and his generous fee paid to his academic mentor (who awarded him the questionable doctorate in a few months and with only 9 units) by hiring him as a consultant, raising the issue of quid pro quo at a cost of taxpayer funds of approximately $375,000 (with this mentor now in prison for defrauding millions from the U. of Louisville),

....and for a plethora of poorly conceived decisions like 'teacher jail'  and his hidden actions with Miramonte School,

....and the arbitrary firings.

For these, and those many things that have been done so 'rapidly' like the shutting down of successful bottom-up programs at Crenshaw HS (where, last week he fired all the teachers who complained including math teacher of 20 years Alex Caputo-Pearl who is/was running for President of UTLA), Verdugo HS, Hamilton HS, and others, where he derided programs designed from bottom-up with teacher/community success, and shut them down in favor of his own administrators and even embedded some charters.

For all this, perhaps the LAUSD School Board will decide he is a detriment to LA's schools, students, and taxpayers, and will fire him in their next evaluation this month.  Also, since the preponderance of teachers voted 'no confidence' in him, the Board will do a fair and proper search for the two top positions in LAUSD.

Let's all join together NOW and make our voices heard by demanding of the Board that they stop being ruled by Eli Broad and his profiteer ilk, and that they institute a new regime of fairness by having a committee comprised of local citizens, local educators, local parents all involved in the wide search for a new Asst Supt, and may be for a Supt...but these all vetted carefully by real people in conjunction with the Board.  We should not have input from politicians and privatizers, but only from sincere supporters of public schools. No Blue Ribbon Committee needed or wanted...none of those who impede a fair selection such as charter promoters Melendez, Sullivan, Riordan, Mrs. Eric Garcetti, Eli Broad, Villaraigosa, Nunez and his boss, Rhee.  Just we plain folks who know the issues and we who pay for all this.

writing/calling the LA Times and the LA Weekly, the State Supt. of Education, the Governor, the LA Board of Supervisors, the LA City Council,

contacting other media sources and all the teachers' unions,

and contacting each LAUSD School Board member.

Urge them all to do the right thing for public education and never again be duped and ruled by Broad and his other free market investor-minded cohorts such as Gates, Bloomberg, Murdoch, and the Waltons.  Students and education cannot be successful if run on a profit making business model, and students are not widgets that can all fit into the same sort of testing mode as Common Core which Deasy pushes.

Billionaire investors who see public education as a great profit opportunity should not be influencing public school board elections such as our recent two, and others nationwide, with huge donations to candidates who are willing to sell themselves for profit. We beat them  this year at this intrusive undemocratic venture by electing teachers Steve Zimmer and Monica Ratliff, who both campaigned on a pittance in comparison with their billionaire financed opponents.

They showed us that change can happen.

Even Governor Jerry Brown, with vast public and teacher pressure, has done an about face on the Obama/Duncan Common Core edicts, and Brown seems to agree with slowing down the process of CC testing. This past weekend was monumental with two of our legislators writing and carrying a bill to NOT test California students on Common Core in 2014 as mandated, but to wait until the students at least study this curriculum before testing.  Brown will probably sign this immediately.   The LA Times and other news sources had reported this testing would be done in January, 2014, and only grades 3 - 8 plus 11 would be electronically tested...but the big caveat was that NO ONE would see the results, not parents, nor teachers, nor the public. This certainly would have been to protect the CC 'pushers' from the scathing results that NYC recently proffered whereby around 90% of students were labeled as failures. It is all online for you to research.  Of course, it would also have meant that 8 year olds would take the test with no keypads, and no ability to even use a keypad, this due to the failure of Deasy and Aquino whose outrageously expensive iPad decisions were so ill-conceived.  This test is mandated for English Language Learners, and also Special Education and Learning Disabled students...and it is time-specific.  Visualize all this...and ask yourself how the outcomes of this testing could ever be accurate.

Please get involved Right Now...and join in on this and educate and encourage your own constituencies to immediately write/call all suggested contacts and insist on this public, not political, committee to vet all candidates.   If the Board agrees right now, we can tap volunteers for the committee make up.  This can all be done rapidly online with the active participation of all of us.