September 10, 2013, 9:59 p.m.  ::  Pioneering guidelines to help Los Angeles Unified school staff and parents navigate the complex and controversial process to overhaul failing schools under the state parent trigger law were approved Tuesday by the school board. 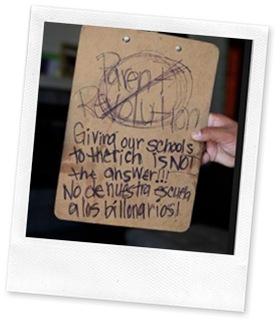 The 2010 state law gives parents at low-performing schools the right to force out school staff, close their campus or reopen as an independent, publicly financed charter.

The district guidelines, approved on a 5-2 vote, marked the first effort in the state to tackle concerns that parents may not always receive accurate or objective information about the status of their schools or the parent trigger process.

The new guidelines require the district to hold public meetings to present information about any school targeted by a parent petition campaign but bar any advocacy either way. The information presented will include five years of the school's student test scores and other data, a summary of improvement attempts and an analysis of the success or failure of those attempts.

In a new initiative, the district will offer training for staff on how to build trust and work with parents to identify campus needs and boost performance.
School staff will be allowed to correct any misinformation being disseminated about the campus. That issue surfaced this year, when teachers at Weigand Street Elementary in Watts were instructed not to respond to parents about issues raised there by a trigger campaign. That effort succeeded in ousting the principal over staff objections.
But the guidelines also bar the use of school facilities and resources to impede trigger campaigns.

Signature gatherers may not offer gifts or promise benefits to persuade parents to sign a petition, and harassment and intimidation are barred against parents, students and staff.

The district is still investigating the cost and feasibility of using an outside party to verify signatures.

The guidelines were based on a measure by board member Steve Zimmer that won board approval in June. Zimmer said he was concerned that the process had created too much conflict and confusion.

“I believe in parent empowerment,” Zimmer said at the time. “What we are trying to do is make sure parents are getting access to extensive, accurate and objective information.”

In L.A. Unified, parents at Weigand and 24th Street Elementary have successfully used the parent trigger process to transform their schools. Trigger campaigns were also launched successfully in the Mojave Desert community of Adelanto and unsuccessfully in Compton.

Zimmer was joined by Marguerite LaMotte, Richard Vladovich, Monica Ratliff and Bennett Kayser in approving the guidelines. Board members Tamar Galatzan and Monica Garcia voted against them.