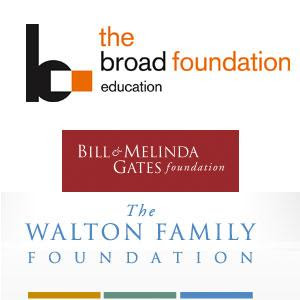 The Gates Foundation, The Walton Foundation and the Broad Foundation could easily be called the un-holy triad of the education reform complex.

While exact numbers are hard to pin down, since 2008 the Bill and Melinda Gates Foundation has spent at least $2 billion, the Walton Foundation at least three-quarters of a billion and the Broad Foundation an estimated half a billion dollars on efforts to “reform” America’s system of education by promoting charter schools, pushing the use of standardized testing, lobbying for teacher evaluation programs based on student’s standardized test results and other corporate-driven initiatives.

The foundations themselves explain their goals and funding strategies through innocuous rhetoric.  For example, the Gates Foundation opines that: “We invest in programs with a common aim to strengthen the connection between teacher and student. To that end, we work with educators, policymakers, parents, and communities to expand and accelerate successful programs and identify innovative new solutions that can help unlock students’ potential.”
But the actual agenda becomes much clearer when one examines their actual list of grantees, which includes most of the country’s charter school management organizations, education reform “think tanks,” and advocacy organizations.

The Gates Foundation: “They’re Everywhere”
Education reform advocacy organizations that have received Gates money include Jeb Bush’s Foundation for Educational Excellence, Stand for Children, the Center for Reinventing Public Education and the Partnership for Learning and Parent Revolution.  Gates has even supported the work of ALEC, the right-wing entity that helps conservative state legislators draft and pass legislation.

To counter the voices and concerns of teachers, the Gates Foundation has also played an essential role in creating pro-education reform teacher organizations including Educators 4 Excellence and TeachPlus, both of which are dedicated to advocating against unions and teacher tenure and for specific teacher evaluation systems that rely on the use of standardized test scores.  Both Educators for Excellence and TeachPlus were the recipients of significant start-up and operational funds from Gates.

The Gates Foundation is especially fond of funding “independent” think tanks that are involved in studying, reporting and developing education reform models.

In Milwaukee, for example, Walton funded the organizations that developed and pushed through the city’s school voucher program. But as a reporter for Gannett News Service discovered, the Walton Foundation also paid for the “external” study of the Milwaukee experiment. Not surprisingly the study, conducted by the School Choice Demonstration Project at the University of Arkansas, concluded that Milwaukee’s voucher experiment had been a success in raising graduation rates among program participants. Left out of the study was the inconvenient fact that 56% of the students who enrolled in the voucher program left before graduating.

Among the top recipients of Walton funds: StudentsFirst, the advocacy group started and run by controversial former Washington DC schools chancellor Michelle Rhee and Teach for America, which has received more than $50 million since 2011.

And while Advocacy has been a prime activity for the Walton Foundation, the organization has devoted the vast majority of its funds to the proliferation and expansion of charter schools.

Eli Broad Foundation: “Top-Down Education Reform”
And finally the last of the “Big Three” education reform funders is the Eli Broad Foundation which claims to be driven by the mission to, “dramatically improve K-12 urban public education through better governance, management, labor relations and competition.”

Although the Broad Foundation hands out its fair share of money directly to education reform entities, the Foundation’s focus has primarily been to train a cadre of school administrators to go out and take over public school systems and force the reforms using top-down strategies.

The Broad Superintendents Academy and the Broad Residency in Urban Education are the two primary vehicles in that effort.  The Broad Superintendents Academy is an executive management training program that takes “senior executives from business, nonprofit, military, government and education backgrounds to lead urban public school systems.”
The number of Broad Academy graduates in senior public school leadership positions has topped 200 including well over 70 superintendents who are working in more than half the states around the country.

The Broad Academy and Broad Residency programs really took off with the election of President Barak Obama.  As the Broad website coos:
“Prior to becoming U.S. secretary of education, Arne Duncan was CEO of Chicago Public Schools, where he hosted 23 Broad Residents. Duncan now has five Broad Residents and alumni working with him in the U.S. Department of Education.”
And, the web site adds, “The election of President Barack Obama and his appointment of Arne Duncan, former CEO of Chicago Public Schools, as the U.S. secretary of education, marked the pinnacle of hope for our work in education reform. In many ways, we feel the stars have finally aligned…With an agenda that echoes our decade of investments—charter schools, performance pay for teachers, accountability, expanded learning time and national standards—the Obama administration is poised to cultivate and bring to fruition the seeds we and other reformers have planted.”