HOW TO IMPROVE LOS ANGELES SCHOOLS? KIDS SAY MORE SPORTS, BETTER LUNCHES, REPRESENTATION ON THE BOARD OF ED + smf’s 2¢ 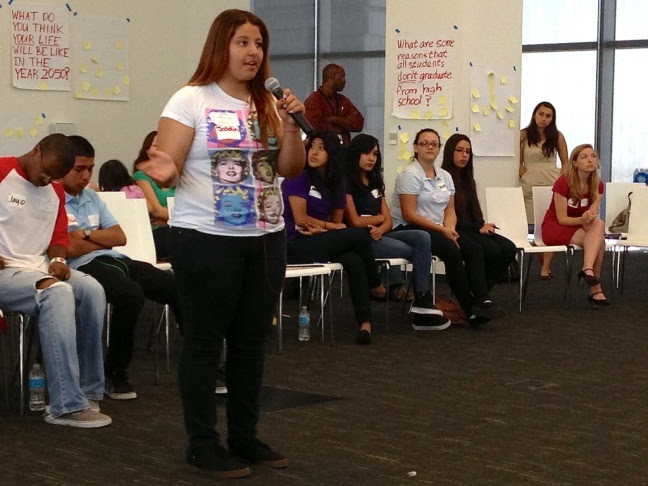 Ben Bergman/KPCC | A student speaks at a weekend forum hosted by United Way, where student leaders weighed in the future of the Los Angeles Unified School District.

September 16th, 2013, 6:15am  | The future of the Los Angeles Unified School District is endlessly debated by politicians, parents, teachers and unions. This weekend, 160 high school student leaders got their chance to weigh in, at a daylong forum hosted by United Way.

“We always talk about what we want to do on behalf of students,” said Ryan J. Smith, Director of Education Programs and Policy at United Way of Greater Los Angeles. “We never talk about what students really want.”

Held on the 30th floor of a downtown skyscraper with sweeping views of the city skyline, the forum looked much more like a management retreat than a classroom.

Students considered questions in breakout groups – seated in circles – and filled out yellow post-it notes with answers and affixed them to the walls.

Questions included: “If you could change one thing about your school, what would it be?”

Among the answers: “Lunch food,” “Have a football and baseball team,” “school spirit.”

Students were also asked: “What are some reasons that all students don’t graduate from high school?"

The students replied: “No purpose,” “They didn’t keep trying,” “Lack of encouragement.”

There were broader queries, too, such as, “What do you think your life will be like in the year 2050?"

A common theme was the effect of budget reductions. Many students said cuts to athletics have hurt school spirit.

Another popular topic was representation. Students said they should have a seat on the Board of Education.

“We always talk about how the youth is America’s future,” said Ashley Perez, a junior at Maya Angelou Community High School. “If we are America’s future why aren’t we being heard? That would be a big step.”

L.A. Unified Superintendent John Deasy, who took questions during a lunchtime session, said he liked the idea of students being added to the board — but he wasn't sure it would be legal under California law.

“If it were legal, I would strongly support it,” he said.

smf: This will come as a shock to Dr. Deasy and his team, but there was an LAUSD before he joined the District.  All those other superintendent's pictures on the wall of the boardroom?  Those were real people, not photo’s rented from some Hollywood prop house.

In the Olden Days – maybe five years ago – every board meeting opened with a short speech from two or three student body presidents – who spoke about the goings-on, wonderfulness and challenges at their schools. Those Student Board Representatives.were seated at the horseshoe and invited to stay and participate in board discussion. Few did – but they were heard and the board was informed.

This went away with Cortines’ second superintendency and Monica Garcia’s board presidency – along with committee meetings and district staff being welcome to address the board even if they disagreed with the superintendent's agenda.

This process is called democracy.