L.A. Unified Supt. John Deasy changes his mind about a plan to accelerate the changeover in standardized testing over financial issues

L.A. Unified Supt. John Deasy changed his mind when he learned that the state would pay for only half of California students to take the English tests and for the other half to take the math tests. (Al Seib, Los Angeles Times / August 8, 2013)

September 8, 2013, 10:31 p.m.  ::  A fissure has emerged in widespread support for legislation that would speed up the overhaul of the state standardized testing system: L.A. schools Supt. John Deasy has withdrawn his support.

Deasy was initially included in pronouncements about the deal as a key backer and as evidence that the plan enjoyed endorsement across the ideological spectrum. The superintendent, for example, has often been at odds with teachers unions, but not on this issue.

The legislation would drop the standardized exams used since 1999 and replace them with a computerized system next spring. The move would advance new learning goals, called the Common Core, that have been adopted by 45 states.

As a result, California would be moving up its timetable for new computerized tests by a year, leaving some school districts scrambling to prepare.

Still, Deasy, leader of the state's largest school district, had supported the rapid changeover. He wanted L.A. teachers and students to focus only on the new test in the spring of 2014, without the distraction of having to prepare also for the older, and different, exams. That way, he hoped students would perform better in spring 2015, when the new tests start to count.

Dropping the old tests, however, also means that individual students and schools would not get scores for 2014 — and that teachers and principals couldn't be evaluated based on test scores.

An aggressive supporter of using test data for evaluation purposes, Deasy accepted the lack of scores for one year as part of what he called a "grand bargain" that would result in better preparation for new curriculum and tests.

But he changed his mind late last week when he learned that the state would pay for only half of the state's students to take the English tests and for the other half to take the math tests. L.A. Unified could pay the extra amount for testing all of its students in both subjects — an estimated $1.7 million — but Deasy said that would be an unfair burden for a school system that serves mostly low-income families needing many services.

It's "troubling," he said, that students could not take the entire test when districts are being asked to "trade away" the ability to see and analyze test scores for a year.

In its present form, "the legislation is incomplete in serving students," Deasy added.

He also objected to a provision that would allow school systems to opt out of testing entirely next year.

An influential advocacy group, Oakland-based Education Trust—West, also opposes the plan, which would suspend social studies tests and exams in many other subjects. Students wouldn't be tested in algebra, for example, unless they took it in 11th grade.

Another advocacy group, Sacramento-based EdVoice, has raised other objections. It wanted many of the old tests to continue during the transition, so that, for example, charter schools seeking renewal could be evaluated on their performance. Chief Executive Bill Lucia said, too, that algebra remains a state graduation requirement and should therefore be tested. He added that the legislation would permit extending the transition — and the lack of test scores — beyond next year.

The opposition, while notable, appears unlikely to derail the plan. It has the support of Gov. Jerry Brown, state Supt. of Public Instruction Tom Torlakson, key Democratic legislators, many school district officials, the state's two major teachers unions and the L.A. Area Chamber of Commerce.

The federal government might be able to block the state plan on grounds that it violates federal rules requiring test scores for most students. Officials with the U.S. Department of Education had no immediate comment other than to say it was examining the California proposal.

from the Fresno Bee: A U.S. Department of Education official who asked her name be withheld said the department is still "reviewing the specifics of the pending California decision."

The department hasn't determined how program improvement schools will be affected, she said   |  http://bit.ly/1fT0Tj8

smf: Deasy’s problem is that he and the CORE CALIFORNIA schools – granted an Extra Double-Dog Special one-year NCLB Waiver by the US Dept of Ed – promised Secretary Duncan and the Feds  increased, not decreased, accountability. However that agreement was never agreed to by the CA Dept of Ed or the LAUSD Board of Education – who don’t feel bound by the terms of the waiver.

cartoon by Wasserman, The Boston Globe 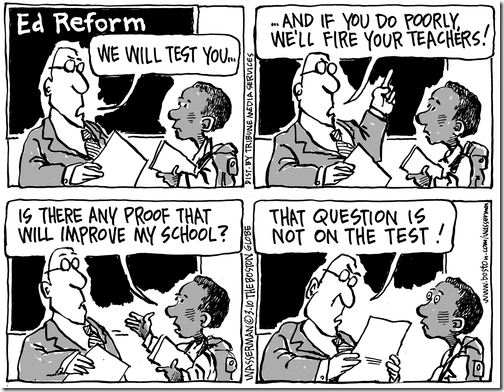