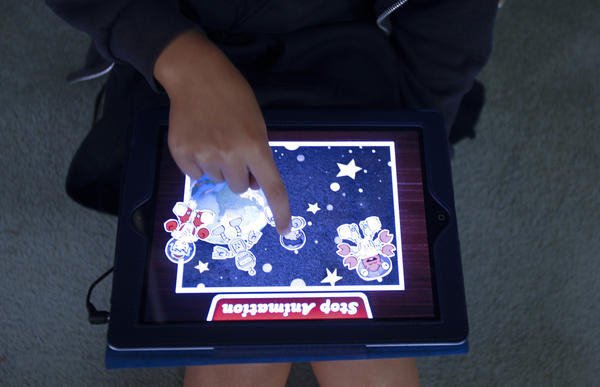 A Southern California student uses an iPad to create an animated cartoon story in a 2011 file photo. In Monterey County's Pacific Grove Unified School District, voters will be asked to pay for such technology with a $28-million bond. (Mark Boster, Los Angeles Times)

September 29, 2013, 10:02 p.m.  ::  A small Monterey County school district has come up with what it considers a novel approach to paying for classroom technology: voter-approved, short-term bonds.

Taxpayers in the Pacific Grove Unified School District will be asked in November to pay for the technology — such as tablets for students and teachers — with a $28-million bond strictly designed for such uses. The money would be spent in intervals over time, such as every three to five years. The idea is to create a funding stream to replace worn or obsolete technology as needed.

Moreover, each time money is used, it would be paid back over a short period — to match the relatively short life span of the product, and also to limit the amount spent on interest.

As with similar voter-approved measures, these bonds would be repaid through increases in property taxes.

Supt. Ralph G. Porras said the idea has met with strong local support, even from a taxpayers' organization that has opposed past bond measures.

"In our community, people are obviously concerned about spending wisely," Porras said. "We talk with people about the ideal classroom: what it looks like, and also about how that will shift and change."

"They get it right away," he said.

Pacific Grove has about 2,000 students and would work with a local committee, with representatives from various groups, on how best to spend the money. The school system has various types of computers and would have to determine its technology needs.

Other districts have spent bond funds over a period of years for technology. The difference in Pacific Grove is that officials presume their technology will become out of date quickly and they're planning for it with their proposed bond spending.

In the Los Angeles Unified School District, by contrast, the cost of an ambitious project to equip all students with iPads is being bundled with school-construction bond projects that property owners will pay off over decades.

Critics have castigated the school system for paying long-term for a short-term product, but so far no serious legal challenge has emerged.

But there's also the matter of how to pay for whatever follows the iPads.

Los Angeles and other school systems have not developed "a system of replenishment," said Dale Scott, whose firm structured the Pacific Grove bond proposal. Instead, many school systems "dump money in on a one-time basis with no plan for what would happen in three, five, seven or 10 years."

L.A. Unified chief information officer Ronald Chandler has talked of savings that could be applied toward future technology, such as a diminished need for photocopiers and printers.

District officials also have discussed the potential for new funding from an improving economy and an expectation that future devices would be less expensive.

In large measure, the school system hopes to rely on money that would have been spent on hardcover textbooks, Chandler said at a L.A. Unified meeting last week. But he conceded that currently there are "no restrictions on how much can be charged for digital texts."

"These devices will be obsolete at some point," Ratliff said. "The question is when."

"Technology changes too quickly," he said.