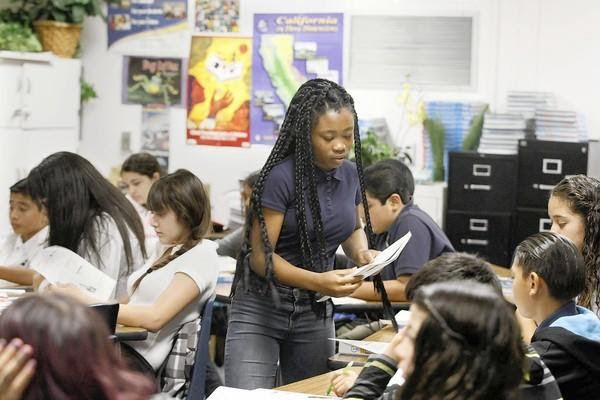 At Lennox Middle School, parents decided against a petition campaign and instead worked with teachers and administrators to obtain more electives and other desired changes. Above, Sherrie Thomas, 13, passes out papers in her eighth-grade pre-Advanced Placement science class. (Gary Friedman, Los Angeles Times / August 22, 2013)

September 15, 2013, 5:11 p.m.  ::  It was billed as a bold attempt to give parents the power to transform their failing schools. But more than two years after California legislators passed the parent-trigger law, it has sparked so much controversy that even the measure's author supports revisions.

Los Angeles Unified last week launched the first effort in the state to ease confusion and conflict over the 2010 law, which allows parents to oust staff, change curriculum, close a campus or convert the school to an independent public charter. Some parent campaigns in Los Angeles, Compton and the Mojave Desert city of Adelanto have sparked division and charges of fraud and deceit by petition supporters and opponents.

The L.A. Board of Education agreed to require public informational meetings about schools targeted in parent petition campaigns. The information presented by the district would include five years of student test scores and other data, a summary of improvement attempts and an analysis of their failure or success.

The new district rules allow school staff to correct any misinformation circulated during petition campaigns and bar the use of campus facilities or resources to impede signature-gathering efforts. Parents who are organizing will be asked to provide evidence that they held public meetings to discuss their proposed campus changes and their process to gather petition signatures.

To minimize the possibility of parent trigger campaigns altogether, the district will begin offering new training for school staff to build more trust and collaboration among parents, teachers and administrators. Such a partnership recently occurred at Lennox Middle School, where parents decided against a petition campaign and instead worked with teachers and administrators to obtain more electives and other desired changes.

Board member Steve Zimmer said he pushed for the changes because he believes parents and others need reliable information about the schools and trigger process. The board also is seeking broader revisions to the law in Sacramento.

"Information is of the highest value, but we have been extremely poor in providing it at the school sites," Zimmer said.

Former state Sen. Gloria Romero, who wrote the law, said she has been troubled by the confusion sown in some parent trigger campaigns and would support some changes. She said she would back rules similar to those that govern ballot initiatives, such as public notification of petition campaigns and disclosures of financial contributors.

She also said she would support public meetings to give parents objective information about their schools — but that they should be held for all low-performing campuses, not just those targeted in parent trigger campaigns. To hold meetings only where campaigns have been launched seems "an effort to suppress and make it more difficult for parents to organize," Romero said.

Board member Tamar Galatzan said any problems with the law should be handled by state officials, not piecemeal by local school boards. She voted against the new guidelines, along with Monica Garcia. Zimmer was joined by Marguerite LaMotte, Richard Vladovich, Monica Ratliff and Bennett Kayser in supporting them.

Meanwhile, activists with the Los Angeles teachers union and Parent Revolution — the Los Angeles nonprofit that lobbied for the law and has aided parents in the state's three successful campaigns so far — took issue with some of the guidelines but embraced others.

Ingrid Villeda of United Teachers Los Angeles said L.A. Unified should have waived the requirement for a $700 permit to hold meetings on campus. Teachers, she said, must pay the fee to hold informational meetings with parents.

And Gabe Rose of Parent Revolution said he was disappointed that the guidelines barring harassment of students, parents and staff provide no penalties.

Zimmer said some issues remain unresolved, such as how to handle parents who say they were misled about the petitions and want to rescind their signatures, as has occurred in Compton, Adelanto and Los Angeles. In Adelanto, for instance, some parents said they were told the petition they signed would bring better programs and teachers — not a charter conversion, which is what happened.

Zimmer said he intended to keep pressing for improvements.

"These guidelines are a first step to a better process," he said.