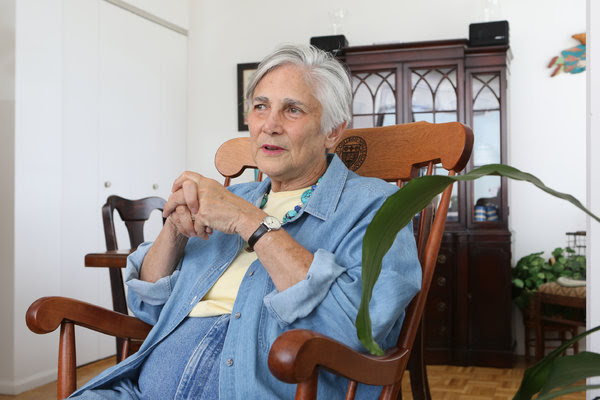 September 11, 2013  ::  Diane Ravitch made her name in the 1970s as a historian chronicling the role of public schools in American social mobility. In the 1990s, she went to work in the Bush administration’s Education Department, where she pushed for a rejection of 1960s relativism and a return to basics and standards. After leaving government, she called for the removal of incompetent teachers, for tying school performance to student scores, and for closing failing schools.

Now Ms. Ravitch, 75, is in the full flower of yet another stage in her career: folk hero to the left and passionate scourge of pro-business reformers. She has come to doubt the whole project of school reform, saying it will solve little without addressing poverty and segregation. “We know what works,” she writes. “What works are the opportunities that advantaged families provide for their children.”

She pumps out hundreds of barbed words on her blog and thousands of posts on Twitter. She calls the current formulas for evaluating teachers “bad science.” And she says that closing schools solves nothing.

Ms. Ravitch has a new book coming out, called “Reign of Error: The Hoax of the Privatization Movement and the Danger to America’s Public Schools,” in which she criticizes what she sees as a useless distraction from the problems of race and income inequality. She warns of “the Walmartization of American education,” and “promised miracles that would shame snake-oil salesmen.”

While previously well known in education circles, she gained a much broader audience after she publicly rejected almost everything she had once believed. In a surprise 2010 best seller, “The Death and Life of the Great American School System,” she openly declared that she had been wrong to champion standardized testing, charter schools and vouchers. She says she is trying now to make up for past errors.

“Part of the energy that I have to try to change things is to expiate whatever responsibility I had in terms of advocating something that turned out to be so terribly wrong for children,” Ms. Ravitch said in an interview late last month in the Brooklyn Heights apartment where she has been living with her partner, Mary Butz, a former official with the New York City Education Department, since they sold their nearby brownstone this summer.

She has an army of new backers, but some of them say she can undermine her message when she criticizes with an overly broad brush or resorts to personal attacks.

Robert Pondiscio, a former Bronx schoolteacher who says Ms. Ravitch was influential in his support for a core curriculum, said that after her conversion, she initially offered a “thoughtful and responsible” counterweight to “kind of a distasteful ed-reform machismo.”

But now, he said, “I worry that Diane is preaching to her choir rather than being thoughtful about it.”

Others say that Ms. Ravitch has opened up a much-needed debate about the direction of education reform.

“About two or three years ago people were feeling, ‘Oh, my God, these people are taking over and there’s nothing we can do,’ ” said Karen Lewis, president of the Chicago Teachers Union, referring to those who advocate for free-market-based overhaul of schools. “Diane has continued to push that envelope and give people such hope.”

Her critics call Ms. Ravitch a shill for teachers’ unions and accuse her of cherry-picking data to condemn charter schools or test-based accountability.

In print, her righteous anger also fuels critics who say she has become a caricature. Three days after the mass murder at Sandy Hook Elementary School in Newtown, Conn., Ms. Ravitch hailed the heroic teachers who died that day and then went on to attack Gov. Dannel P. Malloy for expanding high-stakes testing and charter schools.

In another instance, she wrote on her blog that “there is a special place in hell” for leaders of Parent Revolution, an advocacy group that pushes for state laws allowing parents to force school leadership changes. (She later apologized.)

Ms. Ravitch regularly skewers individuals, including Joel I. Klein, former chancellor of the New York City schools, a onetime friend, and Arne Duncan, the United States secretary of education. In “Reign of Error,” she devotes a chapter to Michelle A. Rhee, the former chancellor of the Washington, D.C., schools and founder of StudentsFirst, a political advocacy group that pushes lawmakers to overhaul tenure, introduce test-based performance evaluations and expand charter schools.

Both Mr. Klein and Ms. Rhee declined to comment.

She displays a quick temper in print, but in conversation, Ms. Ravitch, with cropped white-and-gray-speckled hair, a T-shirt, jeans and sneakers, exuded quiet conviction, speaking steadily for three hours. She raised her voice only slightly to reprimand the 60-pound puppy, a Labrador and German shepherd mix, who bounded around the living room.

“I don’t pick fights with people,” she said, sitting in a rocking chair embossed with the logo of her alma mater, Wellesley College. “But I try to stand up for the weak and powerless and voiceless, and some people don’t like that.”

Critics say she is unwilling to seek common ground. In “Reign of Error,” she sharply criticizes the Obama administration for its education policies, but when she argues for universal preschool, she never mentions the president’s similar proposal.

In a blog post for The Huffington Post last month, Peter Cunningham, a former assistant secretary for communications in the Education Department under Mr. Duncan, wrote that part of his job was to “monitor criticism of our policies” and that he monitored Ms. Ravitch “pretty closely.”

Ms. Ravitch asked a reporter to file a Freedom of Information Act request to find out how the Education Department was “monitoring” her.

Massie Ritsch, a spokesman for the Department of Education, said Ms. Ravitch’s work was followed like that of any other education writer.

When describing her vision for public education, Ms. Ravitch often invokes her own experiences of high school in Houston. What she wants for the nation’s students, she said, is simply what she wants for her own grandchild who attends public school in New York City.