By The Times editorial board | http://lat.ms/19LTUoB 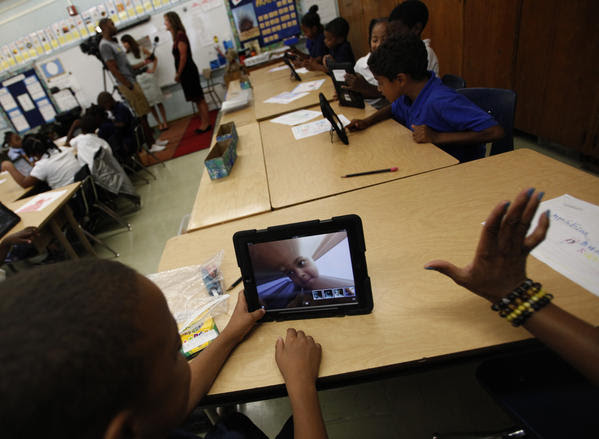 Deasy said these details would be worked out before any decisions were made. But all we know for sure a year later is the price tag: a whopping $1 billion to provide more than 600,000 students and their teachers with top-of-the-line, software-equipped iPads at $678 each, plus the necessary Wi-Fi in the schools. The district has forged ahead — 47,000 students have received iPads already, with a much bigger purchase planned soon — yet vital issues remain inadequately addressed.

Still unclear, for example, is who pays for accidental loss or damage to the iPads. Under the district's contract, Apple will replace up to 5% of the devices for free. After that, the district is on its own. Parents at different schools have been given different information about whether they would have to cover the cost, and Deasy said he's still trying to figure this out. Isn't this something he should have done before any iPads were purchased?

The district also is coming to terms with how quickly its students disabled the firewall on their tablets to gain broad access to the Internet when they're not on campus. There are potential liability and safety issues at stake — if, for example, a student were to make contact with a sexual predator on a school-issued iPad. While it tries to figure that out, the district has decreed that students may not take the tablets home, which seriously limits their usefulness as tools for integrating their class studies and homework. L.A. Unified has taken pains to discourage theft by enabling its iPads to be located and shut off if they are stolen. But are thieves really going to consider in advance whether the device they are looking to grab will work after it's stolen? More likely, once the tablet went dead, they would throw it in the trash.

There's also the matter of keyboards. Apparently the district hadn't foreseen that it might need to purchase them as well, at a so-far unknown cost.

Access to iPads and other high-tech devices could be of tremendous benefit to L.A. Unified students, many of whom have few digital resources at home. But at this point, the district should be well beyond the "we're figuring this out" phase. It has spent some $30 million already, and in November, Deasy is scheduled to ask for close to $200 million more to provide iPads for an additional 300,000 students by the end of the school year. Given the many easily foreseen questions that have not been resolved, the board should require a more gradual rollout so that problems can be identified and addressed before it is too late to change course.

letters to the editor of the LA Times |http://lat.ms/1fMuk9l

It amazes me that the L.A. Unified School District officials in charge of purchasing Apple iPads for students apparently did not foresee the security problems they would have in letting students take the tablets home.

Perhaps the people at Apple, who will sell hundreds of millions of dollars worth of iPads to L.A. Unified, should have been more upfront about the hacking possibilities that would allow students to use the tablets in ways the district didn't intend.

And what about the district's lawyers? I can just imagine the lawsuits after some child comes in contact with a predator while using an L.A. Unified-issued iPad.

Any teacher, and many parents, could have told L.A. Unified Supt. John Deasy exactly what would happen with his iPad scheme.

First, the wireless Internet at multiple-acre schools would not be up to the task — and probably never will be, no matter how many millions of dollars are poured into them.

Second, students are very tech-savvy. The Internet is a wonderful tool for research, but without librarians and teachers to supervise appropriate use, students will inevitably find amusement much more enticing (who wouldn't?).

Too bad the superintendent apparently didn't consult with the people who actually know the students and the school sites. He might have decided the money would be better spent on restoring librarians and adding teachers to reduce class size, thus improving education for all children.

As a former high school teacher of technology going back to 1978, I would have given these students no better than a "C." What took them so long?

During the latter part of my career, my classroom had a computer at each desk. I and others in the district could catch the students visiting "inappropriate" sites, but we could never stop them. This was not for lack of trying.

A computer is a tool, just like a pencil is a tool. It is not possible to prevent the misuse of either.

The school district should expend less resources on policing and blocking usage and more on making students smart and safe users of all tools.

As a 1956 graduate of Roosevelt High School and a retired L.A. Unified teacher, I am proud of the Roosevelt students who wasted no time hacking their newly issued district iPads. This misbegotten idea was a waste of money from the start, and the administrators who thought the iPads were secure were very wrong.