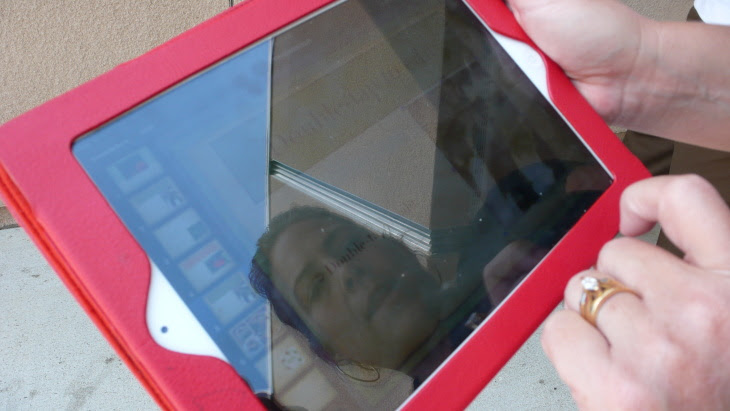 Jed Kim - Science teacher Jodie Capper makes a presentation on her iPad as part of her training.

September 25th, 2013, 7:45pm  ::  Some school board members questioned the Los Angeles Unified School District's control over new iPads on Wednesday, after the first students to get the devices quickly unblocked Internet controls.

At its first-ever meeting, members of the Board of Education's Common Core Technology Project Ad Hoc Committee pounced on Ronald Chandler, L.A. Unified’s top technology officer, asking pointed questions about how 180 students at three campuses managed to bypass security measures within a few days of getting the devices.

“They figured out if they delete this one file, that it allows them to circumvent our filter," Chandler said.

Board member Monica Ratliff pressed him about what the iPads were doing at kids’ homes in the first place. After some tap dancing, Chandler said school principals were given leeway to decide that one.

Not anymore. The district swiftly put a moratorium on taking the tablets out of schools this week.

The tablets are in a pilot phase – only 47 schools will get them this year, and rollout has been slow. Only a handful of schools have the tablets now. Plans call for equipping every student with an iPad next year, but the board has not yet agreed to spend the additional money.

The pilot phase cost $30 million, paid with bonds voters had approved for school construction and improvements.

There are other problems inherent in letting students take the tablets home. Chandler said the three-year warranty the district negotiated with Apple covers defects, but not accidental breakage or theft. Parents will be on the hook in those cases.

There is much wrong in this article and it isn’t with the reporting but more in the absolute+utter failure to inform the reporter, the Board of Education,  the community, district staff, parents, …etc., etc., etc.

The rest is  mis-, over- and.or under- understanding of what’s going on by everyone in the room, And many who were not. Including me and you.