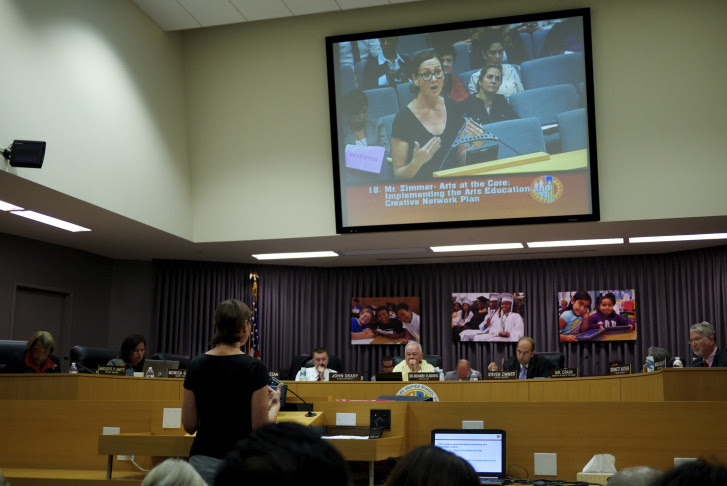 Mary Plummer/KPCC - Danielle Brazell, executive director of Arts for LA, speaks during the public comment period for the Steve Zimmer's arts education resolution at the September 10 LAUSD school board meeting.

September 11th, 2013, 6:30am  ::  In a vote of 5 to 2, the Los Angeles Unified School Board voted to require district officials to spell out how they will implement a new plan to expand arts instruction.

The superintendent and his staff will have until Dec. 3 to produce a budget for the 44-page plan, which was presented to the school board without allowing public comment earlier this summer.  Tuesday's board meeting was the first time the new plan was publicly discussed.

"I come to ask you to please move forward on this. To come back to where we were not so many years ago when LAUSD was a leader in the arts," Scott Folsom, a member of the special committee for the arts at the California State PTA, told the board. "As the money comes back in, this is one of the places where the money needs to go."

Folsom argued the district's arts plan needs to be a constantly evolving program.

The resolution was authored by school board member Steve Zimmer. During Tuesday's discussion, Bennett Kayser presented an amendment, which was approved after a lengthy debate, requiring significant arts funding increases for the 2014-2015 school year.

"We've now made dozens of priorities and this is just one more," Galatzan said, arguing that resolutions weren't the best way to tackle the district's budget.

Former board member Nury Martinez who left to run for Los Angeles city council had originally launched the effort to require L.A. Unified to treat the arts as a "core subject." The mandate was approved by the board last October and district administrators were asked to draw up a plan to make it a reality.

The plan called for integrating arts into other core subjects, like math and science. In a training this summer teachers were taught how a piece of music could be used in a history lesson and how dance could be used to teach physics.

In an interview with KPCC last month, Zimmer said he supported the plan in concept, but without a budget, it's hard to see how it would be put into action. The board has also mandated the district increase millions in funding to restore the budget to the $32.2 million in general unrestricted funds it spent in 2007-08. By comparison, the district spent $18.6 million last school year.

"If the goal is that every student, really every student, not by luck or by affluence, has access to a comprehensive arts curriculum, what would the funding plan look like?" Zimmer said during Tuesday's board meeting debate. "To me that's a legitimate thing to ask for."

The district estimates its average student spends just two percent or less of his or her time learning the arts.