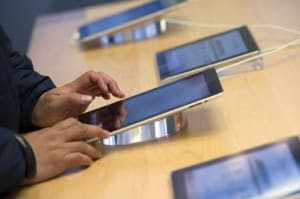 September 27 at 4:23 pm  ::  The $1 billion initiative by the Los Angeles public schools district to give an iPad to all 650,000 students and teachers for home use has hit a snag that, in hindsight, someone should have seen coming: student hackers.

According to a report in the Los Angeles Times,  officials in the country’s second-largest school district stopped allowing home use of the iPads this week because high school students had hacked into the devices and used them for non-educational purposes such as tweeting, checking their Facebook accounts and streaming music.

No adult anticipated this?

School Superintendent John Deasy had pushed the initiative to spend about $1 billion to give every student and teacher in the system an Apple tablet to take home, with half the money going to pay for the devices and the other half to set up wireless networks at schools and other costs. The money is being funded by school construction bonds.

Students were supposed to use the iPads, each loaded with software designed by  Pearson Education and aligned to the Common Core State Standards, to do online lessons, read assignments and take exams. But within a week they figured out how to bypass the security lock and connect to the Internet, the Times report said.

The iPad initiative has proved controversial. Some critics said the school district was spending too much money on technology that might have little impact on student achievement. Others criticized the way the effort was being implemented; initially there was no money allocated to buy keyboards for the iPads, for example, and it’s still not clear how they will be funded.

The Times quoted from a memo sent by two senior administrators to the Board of Education and Deasy:

Outside of the district’s network … a user is free to download content and applications and browse the Internet without restriction. As student safety is of paramount concern, breach of the … system must not occur.

But it did, and students at one high school were freely explaining how they got past the iPad’s security system. Now school district officials are going to have to figure out how to salvage the $1 billion initiative that they didn’t really think through before implementing. Will they be held accountable?