iPad fallout continues: FROM THE HUFF POST + MORE MAIL TO THE LA TIMES

09/27/2013 2:30 pm "Following news that students at a Los Angeles high school had hacked district-issued iPads and were using them for personal use, district officials have halted home use of the Apple tablets until further notice." - Los Angeles Times, September 25, 2013

It turns out students in Los Angeles really are smarter than school board members and two of Americans largest and most powerful corporations.

This school year the Los Angeles school district planned to start distributing iPads to all students in the district, the second-largest school system in the United States. Forty-seven school campuses across Los Angeles are scheduled to receive 640,000 iPads by the end of 2014. The initiative is ultimately supposed to cost $1 billion. The iPads come with a three-year warranty.

In August, 1,500 teachers from 47 schools received their own iPads and staff development to use for lesson plans, class assignments, homework and tests. The iPads came preloaded with software developed by Pearson Education that is supposed to be aligned to the national Common Core standards.

The iPads cost $678 each. They have a case and software, but no keyboard. The LA school district hired fifteen facilitators and paid for teacher training and technical support. Teachers will be provided with packaged lesson plans and material. Students are supposed to use their iPads to access online lessons, read digital texts, and take exams aligned with the lessons.

The purchase of the iPads was approved by the Los Angeles school board by a vote of 6-0 with one school board member abstaining because he owns stock in Apple. District Superintendent John Deasy did not participate in deliberations because he also is an Apple stockholder. School board member Tamar Galatzan declared the decision marks " an amazing adventure we're about to embark on . . . Nothing is perfect, but we've made the best choice possible."

Rejected bids were made by Dell and HP. All three finalists included Pearson Education software as part of their proposal. Apple claims there are nearly 10 million iPads already in schools today."

One week after students started receiving their iPads, students attending at least three Los Angeles high schools had figured out how to disarm a built-in security lock that was supposed to limit what they could do with the devices. This freed them to use the iPads to surf the Internet, send tweets, socialize on Facebook, stream music through Pandora, and who knows what else besides homework and school assignments. Student access to social networks and tweets will of course invalidate any of the online exams.

All the students had to do to trick the system was to delete their personal profile information and then they were free to use the iPads any way they wanted to. They can download their own programs and music onto the iPads and enjoy themselves while they are supposed to be rigorously and vigorously learning the Pearson way.

A different question, but I think an even larger question, is whether teachers should be using scripted online Pearson lessons and assessments. I do not remember any public discussion over whether Pearson should decide what gets taught in American schools.

When the news broke that students had unlocked iPad security, Los Angeles school Superintendent John Deasy declared that "As student safety is of paramount concern, breach of the . . . system must not occur." The School District Police Chief recommended to senior staff that the district delay further distribution of the devices because "once this hits Twitter, YouTube or other social media sites explaining to our students how to breach or compromise the security of these devices," it will be impossible to "prevent a 'runaway train' scenario."

Unfortunately, it appears that neither the school superintendent nor the head of security consulted with tech-savvy students before initiating the Apple-Pearson iPad rollout. Maybe Apple and Pearson should hire the L.A. students to test out their products. In the meantime, Los Angles officials explore ways to use the warranty to get their money back. 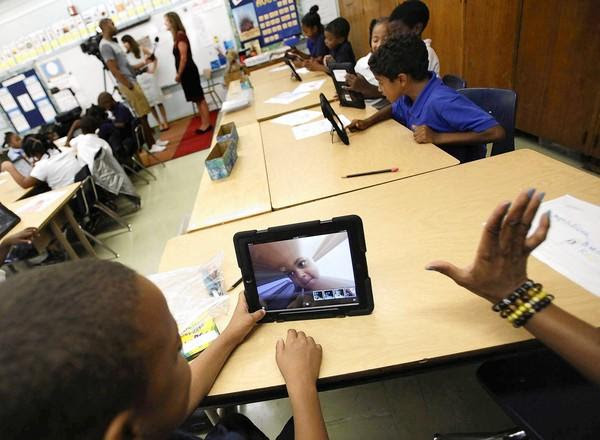 September 28, 2013  ::  Leveling the technological playing field by giving all students — rich and poor alike — in the Los Angeles Unified School District an Apple iPad is a good thing, right?

It isn't so simple, readers are saying.

This week, The Times reported that some of the 47,000 who have received iPads so far have figured out how to disable their tablets' Internet firewall, allowing them to roam the Web for less-than-educational content. It was also reported that the district hadn't decided if parents or taxpayers would pay for accidentally lost or damaged iPads.

The several dozen readers who sent us letters have been unsparing in their criticism of the district. The reactions range from apoplectic (stunned and angered that L.A. Unified didn't work out these details) to snarky. As of Friday, no readers have said anything positive about the district's iPad rollout.

Here is a selection of those letters.

"Any classroom teacher will tell you that students will damage school supplies and equipment. These are children, after all.

"The district insists on feeding every elementary school student a free breakfast, desired or not, and throwing away the food that is uneaten. Officials contend that parents either cannot or will not feed their children breakfast. Why would they assume that parents would properly supervise the use and pay for any damage that occurs with an iPad?

"First, the school board must stop making expensive decisions based on advice from people who do not understand the classroom. Next, there should be a full public accounting of the history of purchase of these iPads. The taxpayers and the children they want to educate deserve to have the money spent effectively."

Ed Kaz of Oak Park makes the same point in one line:

"The district is also reporting that kindergarten students are breaking pencils and middle school students are refusing to eat their vegetables."

"So L.A. Unified is trying to lock the barn door after the horse has been taken.

"First, the district didn't realize it would need to buy keyboards for the iPads. Then, it didn't foresee that some students would hack the tablets to use them for unauthorized Web surfing. Then it realized that some iPads will get broken or stolen, and now officials don't know if they can make the parents pay for the costs.

"It's time that L.A. Unified's top officials went back to school themselves."

S.R. Fischer of Los Angeles rethinks his generosity as a voter:

"It will be a very cold day in hell the next time I vote to increase my taxes to pay for any more school bonds, which the district is using to pay for the iPads. I don't understand how such

ineptness is now regrettably accepted as the new status quo."