Sept 12, 2013  ::   California has been preparing to implement tests aligned to new national Common Core standards, but late bill amendments broadened the number of schools that can drop the current Standardized Testing and Reporting so teachers would not teach to new standards while old tests loom.

September 11, 2013  ::  After debating the relative merits and drawbacks of standardized testing, the Assembly on Wednesday sent Gov. Jerry Brown legislation allowing California schools to opt out of current statewide assessments.

California has been preparing to implement tests aligned to new national Common Core standards, but late bill amendments broadened the number of schools that can drop the current Standardized Testing and Reporting so teachers would not teach to new standards while old tests loom.

Brown has backed Assembly Bill 454 despite warnings from U.S. Secretary of Education Arne Duncan that the bill sidesteps California's obligations to gauge the performance of schools and educators through year-to-year test score comparisons. Critics of the bill articulated similar concerns on the Assembly floor.

"Is testing for teacher accountability, or is it for feedback?" asked Assemblywoman Kristin Olsen, R-Modesto, vice chair of the Assembly Education Committee.

"Californians want testing," she added, "but Assembly Bill 484 guts testing by eliminating it."

Lawmakers backing the bill said it would help California transition into a new framework for classroom instruction and testing.

"The train has left the station," said Assemblyman Rocky Chavez, R-Oceanside. "Common Core is here. The teachers are out there doing it." 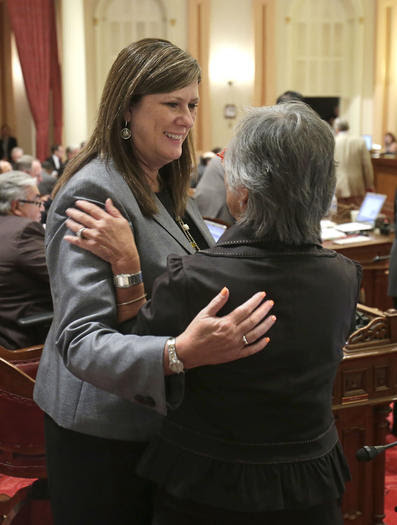 September 11, 2013, 6:33 p.m.  ::  The California Assembly on Wednesday easily approved an overhaul of the state's student testing system in which schools and parents would not receive test scores for at least a year.

The vote of 51 to 22 was largely along party lines, with Democrats overwhelmingly in favor. The state Senate had passed the bill Tuesday. The next stop for Assembly Bill 484 is the office of Gov. Jerry Brown, who has said he supports the legislation.

The bill would immediately end state funding for pencil-and-paper standardized exams used since 1999. In their place would be new, computerized tests based for the first time on Common Core learning goals adopted by 45 states. These learning standards are supposed to place a greater emphasis on critical thinking, as opposed to memorizing facts.

There would be no scores because the new system is in a trial period, said the bill's author, Assemblywoman Susan Bonilla (D-Concord). This year's efforts "are designed to see how the test will work and how students will work with it," she said. In addition, "we want students to be able to have a hands-on experience with the tests as much as possible.”

The bill would permit a further postponement of scores, if needed, for 2015.

In a statement this week, U.S. Secretary of Education Arne Duncan objected strongly to the lack of test scores. He said that parents need to know how students and schools are doing and that federal rules require that. Test scores, therefore, are necessary, he said.

Duncan's reasoning was cited by Republican lawmakers in the floor debate.

Having results "tells parents like myself” which schools are working and where students are doing well and where they need help, said Assemblywoman Kristin Olsen, a Modesto Republican. She echoed calls for using the old testing system until the new one is ready to deliver results.

The old test "is far from perfect but it’s what we have today,” Olsen said.

Irvine Republican Assemblyman Donald P. Wagner worried that Duncan would make good on his threat to withhold federal funds if the legislation went forward. Federal dollars make up about 10% of school district budgets.

And Assemblyman Tim Donnelly (R-Twin Peaks) said the state just isn't ready for the changeover, which requires retraining teachers and the widespread use of computers.

But supporters cited the need to prepare as an argument in favor of the bill. The burden of giving the old tests while moving to a new curriculum would be counterproductive, said Assemblywoman Sharon Quirk-Silva, a Fullerton Democrat.

"Why test on the old system when moving to the new system,” said Assemblyman Al Muratsuchi, a Torrance Democrat.

At Beaumont Elementary School in Vista, third-grade teacher Kristina Woods prepared her class for a standardized testing in April of this year. — Bill Wechter

10:38 p.m.Sept. 11, 2013  ::  Ignoring warnings from the federal government, the Legislature on Wednesday sent to Gov. Jerry Brown a bill that would halt public reporting of school performance for up to two years under an overhaul of the state’s standardized-testing system.

The measure, which the governor has said he would sign into law, would immediately suspend the multiple-choice standardized tests called STAR. That system has been used to gauge student learning in California since the late 1990s.

Schools would be allowed to transition to new computerized exams based on the national Common Core academic standards, which emphasize critical thinking over rote memorization. They could start administering those tests on a trial basis next spring, with no scores made public, and could extend that arrangement for another year.

With Democrats leading the effort, the Senate passed the legislation on Tuesday and the Assembly followed a day later. The approvals came despite threats from the nation’s education chief to withhold federal education funds if the measure is implemented.

U.S. Education Secretary Arne Duncan, who is scheduled to visit a school in Chula Vista on Friday, and others object to the abrupt shift that would leave California without public disclosure of school test scores — something mandated by federal law. They said lack of such information would deny schools, parents and community members the chance to consistently monitor students’ and educators’ performance in key subjects.

“A request from California to not measure the achievement of millions of students this year is not something we could approve in good conscience,” Duncan said in a statement. “No one wants to over-test, but if you are going to support all students’ achievement, you need to know how all students are doing.”

Results of the Common Core trial testing wouldn’t be made public because they are designed to gauge the exam’s effectiveness and work out kinks, supporters of the state legislation said. It also would be unfair to hold schools accountable for teaching standards that haven’t been fully implemented yet, said Assemblywoman Susan Bonilla, D-Concord, who wrote the measure.

Education officials throughout California, including in San Diego County, largely support the complete shift to the new testing system this year.

Cindy Marten, superintendent of the San Diego Unified School District, is so eager to immerse schools in Common Core that she recently volunteered to have the entire district conduct a field test of the new exams next spring. Participating in a trial run of the tests will give teachers a better chance to prepare for the real deal, she said.

“We just want to be tested on what we are teaching,” Marten said. “I want to be creative and figure how we can use the field test this year for the benefit of everyone.”

Bill Freeman, who represents more than 6,000 teachers as president of the San Diego Education Association, said instructors will continue to measure student performance — with or without public test scores — by using the nuanced tools of their profession.

“As a teacher, I never believed in evaluating kids based on a single test score,” he said. “Teachers use multiple measures in the classroom and they communicate that information to parents.”

In Sacramento, State Superintendent of Public Instruction Tom Torlakson said: “It is time for a clean break from assessments that are out of date and out of sync with the work our schools are doing to shift to the Common Core and help students meet the challenges of a changing world. It is simply wrong to expect schools to prepare our students for the future while continuing to ask them to use tests that are products of the past.”

But some people expressed concern that the legislation would allow schools to dodge accountability on student performance, which they said is especially critical for students with disabilities and those not fluent in English.

Critics also worry about the state burdening districts with the cost of comprehensive standardized testing this academic year because it would cover only the expense of field testing students in math or English. Districts have the option of administering the outgoing STAR tests, which cover a wider range of topics, but at their own expense.

California is ignoring its moral responsibility and legal obligation to report on the progress of its schools and students, said Arun Ramanathan, executive director of the nonprofit group Education Trust–West.

“Parents want to know how their kids are doing. The public relies on this information and shouldn’t have to go a year or more without it — that is irresponsible,” Ramanathan said. “If California decides to flout the law, what are the consequences?”

Los Angeles Unified schools chief John Deasy, who initially backed the legislation, now opposes it because he said the measure would cost his district $1.7 million to fully test students in the spring.

The governor and other supporters of the overhaul said they will work to resolve any differences with the federal government.

“We support the legislation. California will continue to focus on the new and rigorous Common Core standards,” said Jim Evans, a spokesman for Brown. “There is no reason to double-test students using outdated, ineffective standards disconnected from what’s taught in the classroom.”

Over the years, schools in San Diego County and statewide had shown steady improvement on STAR test scores. Then most experienced a plateau or decline in the spring. Education officials said primary factors were budget challenges caused by the state’s fiscal crisis and campuses starting to focus on Common Core instead of the STAR system.