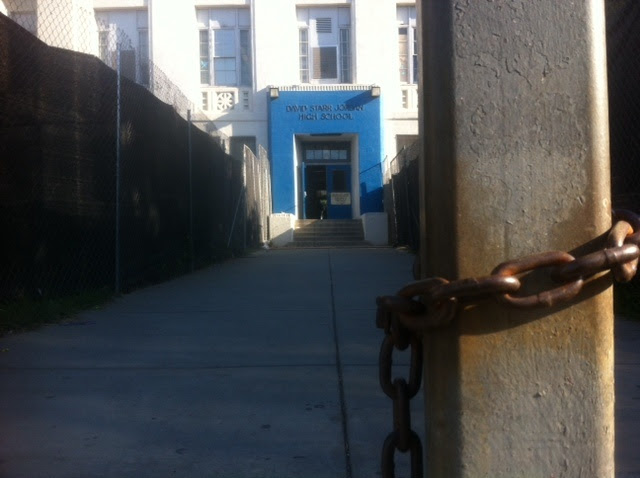 Annie GIlbertson/KPCC  | Jordan High School in Watts is under massive construction. Administrators hope improvement to academics will be equally as dramatic.

September 24th, 2013, 6:00am  ::  On a recent Friday morning at David Starr Jordan High School, students wander in from their Watts neighborhood one and two hours after the morning bell. Some show up for a class or two, then head back out to the streets.

Even in class, it can be hard to stay on track, said freshman Matica Marcel, who blames her classmates.

“There are like a couple of them – two or three, you could say – that don’t really do their work," she said. "But they are boys, you know."

"They don’t have good teachers, and it’s in the ghetto," Brown said as he wandered in to school late one recent morning. "We live in the housing projects.”

It’s hard to remember a time when officials weren’t trying to resuscitate Jordan high. Fewer than 60% of its students are able to read and do math well enough to pass the high school exit exam. Even fewer graduate.

For decades, veteran educators have seen turnaround teams come and go from the campus, next-door to the Jordan Downs housing project in Watts.

As the Los Angeles Unified School District starts a new school year with a new contract with the federal government to fix persistently failing schools, 27 of its most poorly performing schools, including Jordan, got a new title: Priority Schools.

Even school board members are confused about what the change - part of a waiver from strict provisions of the No Child Left Behind law - means and how it will help students.

"What I’m hearing you say, and I need to you to clarify this for me, is that we are just giving them a different name – Focus, Priority and all this – but it’s the same schools with which we’ve been having difficulty all along,” Board of Education member Marguerite Lamotte said during a recent public meeting. “They are just in a different category, another name.”

Lamotte pressed for specifics on the particular interventions the new descriptions would prescribe – there are none. Schools come up with their own unique intervention plans. That raised questions from board member Monica Garcia.

“What I’m interested in is how you will track whether or not this effort does make difference for kids,” Garcia said.

The federal government has given waivers to No Child Left Behind 41 states, plus the District of Colombia. California's application was denied - in part because the state would not promise to use student test scores in evaluating teachers. But eight California school districts, including Los Angeles, Long Beach, Oakland and San Francisco - banded together and made their own waiver application. The federal government approved it last month.

The waiver lifts requirements for specific interventions - such as tutoring or transportation for students who choose to abandon persistently failing schools for better school ones. According to the California Department of Education, about 650 of L.A. Unified's roughly 1,000 schools have failed to meet growth targets. But the number includes even some high performing schools whose students do well but have plateaued and administrators complain cookie-cutter approaches required by No Child Left Behind often fail to address a specific school’s struggles.

As part of the waiver deal, L.A. Unified and the others have to focus on the lowest performing schools, labeling them "priority schools" and be more transparent about how well disadvantaged kids are learning district-wide. Instead of a school reporting data from groups of 100 students or more, as they used to, the threshold is now down to groups as small as 20 students. The public will see the progress – or lack thereof – of smaller populations of black or Latino students or students with disabilities or those from poor families. (A bill awaiting Gov. Jerry Brown's signature would shield standardized test results public next year and potentially the following year.)

The California districts' waiver does not require specific learning programs. Its big idea involves partnering failing schools with more successful schools with similar demographics. Those teams will sit down together over the next few weeks and come up with a plan which includes measurable goals, officials said.

If those specific goals aren’t met over the next few years, the principal or teachers at the poor-performing schools may be replaced and the school may be turned over to a charter organization, or simply closed. As two major initiatives collide - federal school reform and a switch by most states to new Common Core standards and tests - it’s unclear how the lack of test results this year will affect the plan.

The priority schools plan doesn’t apply to charters, some of which are also performing at the bottom of the district and are not subject to similarly mandated interventions.

Fredrick Hess, of the conservative American Enterprise Institute, said any plan to improve educational outcomes for disadvantaged students is attractive. He said the problem is such plans seldom work.

“There is demand out there that folks out there in the states pretend they know how to make schools better and the U.S. Department of Education will pretend it believes their strategy,” said Hess.

The federal government has been writing policies to try to even out the playing field in schools since the 1965 passage of Title I act of the Elementary and Secondary Education Act, which called for equal services at schools. Landmark changes in 2001 under No Child Left Behind required every child be proficient in English and math for his or her grade level by 2004, a goal now widely understood to be unreachable.

Even L.A.’s former mayor, Antonio Villaraigosa, had a plan. After his efforts to take over running L.A. Unified failed, he created the Partnership for L.A. Schools which now oversees 17 of the district's worst performing schools, including Jordan high.

Instead of replacing each other, years of reform programs can stack on top of one another. Hess said that leads schools to treat the next mandate that comes along as a checklist – new burdens rather than new opportunities.

Joan Sullivan, CEO of Partnership for L.A. Schools, said the waiver and its new outline will help focus the district on it’s lowest performing schools.

Her group has its own turnaround plan for Jordan, which saw test scores creep up a few points last year.

"Our focus begins with great school leaders. We know that great schools have great leaders," Sullivan said. "And, we invest a lot of energy in recruiting, training and supporting our leaders."

Partnership installed a new principal at Jordan this year - a Watts native they’ve been cultivating since his teachers days. It’s an example of the pipeline of teacher leaders Partnership is trying to create. With donor money, they can reward top talent with higher pay.

Principal Carlos Montes declined to be interviewed for this article and a reporter was not allowed into the school.

Proponents of the priority schools framework said it might finally do what schools need – allow principals to address their own problems while synchronizing varying programs and competing agendas.

Donna Muncey, Chief of Intensive Support and Intervention for L.A. Unified, said the new framework allows schools to craft approaches based on those teaching strategies that up-to-date research shows work.

“That didn’t exist in 1984, 1994 or really, frankly, a lot of it didn’t exist in 2004," said Muncey, who has researched and worked in school reform in Chicago, suburban D.C. and other places across the country for three decades. "We haven’t tried everything we could try. There is no reason to give up.”

Clarification: An earlier version of this story did not fully explain Muncey's experience in school reform.

Make no mistake, the author of this flavor of  “turnaround/reconstitution” at Jordan - written without consultation with the Board of Education - and the previous one, was Superintendent Deasy. And that “suburban DC” school district that Donna Muncey worked ®eform at? That would be Prince George’s  County – where she worked for Deasy. The superintendent made a lot of noise at PGC – and got a lot of national attention. But he didn’t make much difference.  The same is true of his tenure at Santa Monica Unified.