Hacking by students and missing iPads are only part of the problem. Did anyone ask if the teaching software is any good? 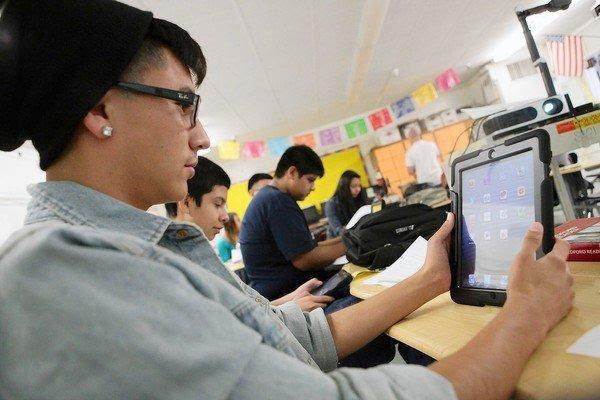 Maybe. But so far, nobody at district headquarters gets any gold stars for the rollout.

Last week, students at Roosevelt High were almost instantly able to breach the wall intended to keep them from using the iPads as toys rather than tools. They simply deleted the personal profiles on their tablets and presto! A free pass to YouTube and Facebook.

As my colleague Howard Blume reported, the district initially said 185 students had broken through the wall, but soon the number was adjusted up to 260. Then an additional 80 students at two other high schools made monkeys of the L.A. Unified geniuses who approved the setup.

As one Roosevelt student explained, they had to do something. The problem with the iPads, as issued?

"You can't do nothing with them. You just carry them around."

Where do I begin?

Is that a case of lousy students, bad teaching, uninspired software or a failure to fully appreciate the challenge of convincing students the tablets are for education rather than recreation?

The Roosevelt story was followed by another Blume report that 71 iPads were "missing" from an early implementation program last year.

And speaking of what happens when the tablets leave campus, Board of Education member Monica Ratliff called it "extremely disconcerting that the parent and student responsibility issue has not been hammered out" when it comes to damaged or lost iPads, which cost almost $700 apiece. (Keyboards, an apparent afterthought, will cost the district an additional $38 million).

L.A. Unified Supt. John Deasy has a lot to answer for. But these little snafus may be distracting everyone from bigger concerns about Deasy's determination to move faster than any other large district in getting every student wired.

One question is whether the educational software is any good, or whether everyone was so focused on the hardware that they forgot to scrutinize the separately purchased content?

Steve Zimmer, a board member, said he isn't ready to judge the software, but he agreed that he and other district officials may have had their eye on the wrong ball in making a huge financial commitment without more discussion.

There was "a lot of talk about the machine and…very little talk about software," said Zimmer, who was motivated in part by his conviction that tablets can serve as an equalizer in a district with so many disadvantaged students. He said he put faith in Deasy and the procurement process because "frankly we are not equipped as board members to micromanage."

I'd have to disagree with him there.

We're talking about a superintendent who's in a race to spend $1 billion, counting bringing Wi-Fi to classrooms. And let's not forget that Deasy was featured as a pitchman in a commercial for iPads, and Deputy Supt. Jaime Aquino (who just resigned in a snit over the tech implementation) once worked for the parent company of Pearson, the firm hired to provide curriculum for the iPads.

So, yeah, do some micromanaging. Hold people accountable. Ask questions.

As in, what was so compelling about the Pearson proposal that L.A. Unified bought a product sight unseen?

Did the district do a thorough job of evaluating other software options, and is it too late to change course before committing millions on the next phase of the rollout?

Shouldn't there have been more public discussion, more teacher training and more information for parents, given that we're in the midst of a dramatic shift to digital material and an entirely new set of learning standards called Common Core?

I know teachers who believe the kinks will be worked out and the tablets will be an engaging and effective teaching tool. And earlier this year, I visited a Granada Hills high school where teachers and students in a pilot program were giving high marks to iPad instruction. (Of course, 69 of those iPads are now missing.)

But I got a closer look at the content on one of the iPads last week, and for all the hype about students taking a magic carpet ride into the future on these tablets, I missed the wow factor. One eighth-grade math lesson included a video of some guy on a treadmill going faster and faster, with a question about how to graph his movement. But no matter how you answered, there was no feedback, and no right or wrong answer.

"A mediocre teacher with little training, and with a shiny new textbook, could do better than what I saw," said former teacher and school board member David Tokofsky.

Scott Folsom, a member of the oversight committee that supported using bond money for the technology despite reservations, now has concerns that extend beyond content.

"I remember Deasy said … last week that it was only 20% ready … and yet the contract called for it to be ready in September," Folsom said of the software. "We've only got a couple of days to go and it's not going to be ready. That's what really concerns me."

I'm with him after looking at another eighth-grade math lesson on one of the district-issued iPads that involves graphing a roller coaster's movement. Just when it might get interesting from an interactive standpoint, a message pops up:

"This digital manipulative (interactive) is not playable in this version of the Pearson Common Core System of Courses."

That'll get the kids excited, won't it?