Q&A: HOW LAUSD NEGOTIATED A 1-TO-1 DEAL WITH APPLE

The Los Angeles Unified School District is providing iPads to students like Tiannah Dizadare (smiling as she works with classmate Avery Sheppard) at Broadacres Avenue Elementary Schools in Carson, Calif. Proponents hope an emphasis on technology will boost achievement and give low-income students new opportunities. Skeptics have questioned the financing of the multimillion-dollar project. —Bob Chamberlin/Los Angeles Times/AP

Published Online: September 30, 2013/Published in Print: October 2, 2013  ::  The board of the Los Angeles Unified School District approved a $30 million contract with Apple Inc. in June, for the first phase of a roughly half-billion-dollar effort to provide all 660,000 students in the district with their own iPads by the end of 2014.

But what is all that money actually buying, and how did Los Angeles Unified and Apple strike their headline-grabbing deal?

Education Week recently reviewed thousands of pages of documents about the contract, which helped provide important context for a telephone question-and-answer session with the architect of the groundbreaking agreement: Mark Hovatter, the chief facilities executive for the Los Angeles district.

Two important points about the deal stand out:

Skeptics of the deal, including John Mockler, an educational consultant and former executive director of the California state school board, question the wisdom of making a massive purchase that has multiple big objectives and such a quick implementation timeline, especially given that the Los Angeles district will be financing the three-year technology effort as part of a bond initiative that will take more than two decades to completely repay.

Such purchases, Mr. Mockler said, “can be bold, or they can be big failures.”

Mr. Hovatter, though, made clear that the initial rollout of 30,000 iPads in 47 schools, already underway, is not a pilot project. He said that Los Angeles school officials are “absolutely convinced” that going all-in as quickly as possible “is the right thing to do.”

Los Angeles Unified is paying significantly more for its new iPads with retina displays than consumers pay for a similar product off the shelf: $678.58 per tablet (after volume rebates), compared with about $499 at an Apple store. 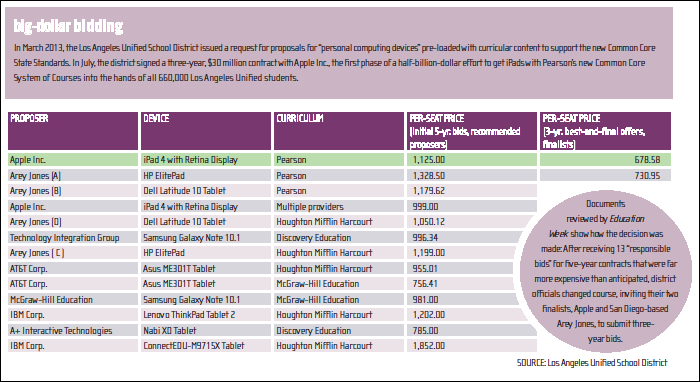 Mr. Hovatter, though, bristled at the comparison, noting Los Angeles Unified’s “high standards” for “content, durability, warranties, security features,” and more. Indeed, the district’s request for proposals included 32 minimum requirements for the device’s hardware, 15 such requirements for the device’s functionality, nine requirements for its applications, and a long list of “non-negotiables” about everything from connectivity to the mix of 5th grade reading selections the curriculum must contain. The district actually decided against less expensive proposals from Apple that would have involved either an older-model iPad or curricular content from multiple providers.

But for Mr. Mockler, it’s that merging of device and curriculum that is the cause for most concern.

Los Angeles Unified, he said, “hasn’t used this technology for the purpose they’re now using it for, and the content hasn’t been tested in Los Angeles with L.A. kids, under L.A. circumstances.”

Education Week: Why purchase devices and curriculum as part of a single massive contract?

Hovatter: We wanted one system. Would you buy your engine and car separately? You can always second-guess the risks. It’s also risky to do two things independently and hope they fit together and work well.

We have one mission as a district, and we would like to have one source of accountability to achieve that, rather than having the software people pointing fingers at the hardware people [and vice versa]. So we forced a marriage between the two [vendors].

EW: How did you weigh the relative importance of the device itself, the content included on the device, and other factors when reviewing bids?

Hovatter: Certainly, the content was important. But as it turns out, the three [vendors] on the short list were all proposing the same [Pearson] content. There was a consensus that this was the best. So the devices themselves, their sustainability and security and durability, the support team, the training that was offered, the accessibility [of vendor staff] when we do have questions, all were important.

Apple’s initial bid for iPads preloaded with Pearson content, operating under a five-year contract, came out to $1,125 per device, meaning it would have cost Los Angeles Unified a total of $743.6 million to purchase devices and content that would be guaranteed until 2018.

District officials, though, were taken aback by that price tag, as well as other similarly expensive bids they received. Ultimately, Mr. Hovatter said, district officials made a difficult decision: to offer their finalists, Apple and San Diego-based Arey Jones, the opportunity to submit revised bids for three-year projects.

EW: During the procurement process, Apple’s proposed price point dropped almost 40 percent, from $1,125 to $678.58 per device. How did that happen?

Hovatter: Our goal was to have [the device] guaranteed for five years [including providing replacements for lost and damaged devices]. Nearly all of the proposers saw that as a significant risk, so they basically doubled their price. They were bidding it as if they were going to have to provide two devices for every student.

EW: Aren’t there some serious risks associated with limiting the contract to three years?

Hovatter: We would have loved to have a 10-year guarantee, but that’s not provided throughout the industry, and it would have been exorbitant to do. We will have to re-evaluate and make some arrangements to have [the curriculum] continued [past 2016].