Federal meddling? ….or an effort to avoid a conflict? DUNCAN THREATENS REPERCUSSIONS IF CALIFORNIA ENDS STATE TESTS FOR ALL STUDENTS 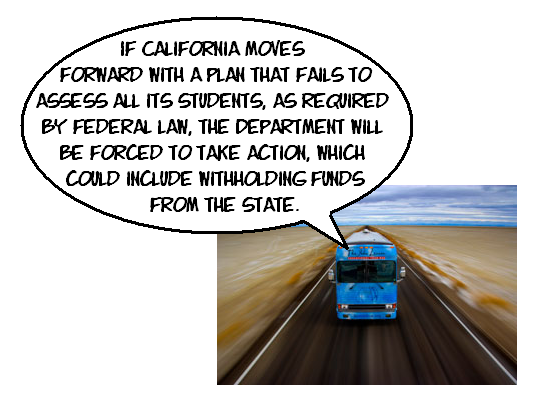 September 9th, 2013  :: It looks like “High Noon” again for California and the Obama administration over education.

Hours before a key vote in the Legislature, Secretary of Education Arne Duncan has warned California not to administer a partial practice or field test on the Common Core standards to some students in lieu of giving the existing tests on state standards to all students next spring – or face consequences.

“If California moves forward with a plan that fails to assess all its students, as required by federal law,” Duncan said in a statement released Monday night, “the Department will be forced to take action, which could include withholding funds from the state.”

Duncan was reacting to Assembly Bill 484, pushed by Superintendent of Public Instruction Tom Torlakson, which calls for immediately ending most state standardized tests, including those required by the No Child Left Behind law for federal accountability: English language and math tests for 3rd through 8th grades and grade 11. Students in districts capable of offering the computer-based field test for Common Core would take either the English language arts or math test, but not both, under the bill.

Deputy State Superintendent Deb Sigman said last week that the state has money to pay for only one of the tests; districts could offer both, on their nickel, she said. However, districts without the technical capacity – enrolling a small proportion of students, the state predicts – would not be required to offer any English language or math tests, since a field test by paper and pencil is not one of the options. Sigman has estimated that each field test would cost about $5.50 per student or about $18 million for the 3.3 million California students who’d be tested.

AB 484, sponsored by Assemblywoman Susan Bonilla, D-Concord, was negotiated with the Brown administration, legislative leaders, and Torlakson’s staff over the last month. The state Senate is expected to vote on it today. All bills for this session must be passed by Friday.

Duncan announced in July that, in order to avoid burdening states with double testing, he would consider exempting schools giving the Common Core field test from also administering their state tests. The Smarter Balanced Assessment Consortium, which is developing the Common Core tests for California and two dozen other states, has said it needs to test 10 percent of students in math and 10 percent in English in order to create a valid and reliable assessment in 2015. California is a governing member of Smarter Balanced. Last week, the State Board of Education voted unanimously to seek a field test waiver for California under the terms of AB 484.

Sigman and other state officials said last week they had been discussing a waiver with federal officials, while acknowledging, pending legislation passing, it was premature to predict they would get it. Duncan’s statement didn’t state that a waiver for a field test-for-all was out of the question. Four other smaller states – Montana, Idaho, Connecticut and North Dakota – also have requested a waiver to give every student the Common Core field test, Massie Ritsch, the Department of Education’s acting assistant secretary for communications and outreach, said Monday. While his statement was not explicit, Duncan appeared to object that some California students would take no test required by federal law, while others would take a partial test.

“In states like California that will be field-testing more sophisticated and useful assessments this school year, the Department has offered flexibility to allow each student to take their state’s current assessment in English language arts and math or the new field tests in those subjects. That’s a thoughtful approach as states are transitioning to new standards,” Duncan said. “While standards and tests may not match up perfectly yet, backing away entirely from accountability and transparency is not good for students, parents, schools and districts.”

Duncan did not hint at how or how much California would be penalized if it suspends state tests without a federal waiver. Ritsch said the federal government may withhold money it gives the state for testing and perhaps other funding.

Torlakson, however, was unfazed and indicated he had no plans to amend the bill to meet the conditions of a waiver it has not yet sought, spokesman Paul Hefner said Monday night. “California has yet to receive guidance from the feds as to what would be acceptable,” said Hefner. The state had no inkling Duncan’s statement was coming, he said.

Torlakson defended plans to make a clean break this year from giving state tests on old standards and instead to pursue “goals for 21st century learning.”

“We won’t reach them by continuing to look in the rear-view mirror with outdated tests, no matter how it sits with officials in Washington,” he said, responding to Duncan. “We look forward to the opportunity to make our case to the Administration when the time comes. When we do, we hope they agree that withholding badly needed funds from California’s students would be a grave and serious error.”

Los Angeles Unified, Fresno Unified and other districts also had been opposed to AB 484 as written and their superintendents had been pressing Torlakson and state leaders to pay for both the English language arts and math field test for every student, saying it’s inappropriate to burden districts with a state responsibility. “The smart and right thing to do is total access for all kids,” Los Angeles Unified Superintendent John Deasy said Monday night. If forced to pay for either part of the field test, LAUSD will bill the state, he said.

Bill Lucia, president and CEO of the advocacy group EdVoice, which has criticized the suspension of state tests under AB 484, praised Duncan’s statement. “By proposing to eliminate testing and information for parents, while hiding behind an empty waiver request, California is conceding it has no substantial Common Core implementation plan. Instead of leadership, California is signaling it is willing to gut accountability and eliminate the ability of local school districts … to gauge the progress of students and track achievement gaps.”

For the past decade, California Standards Tests have been the primary measure of a school’s academic performance and of the achievement gap by low-income and minority students. Individual student scores have been provided to parents. Because the primary purpose of the Common Core field test is “to test the test,” there would be no individual scores given, Sigman told the State Board last week. And it is unclear to what extent schools would receive results as well, she said.

But for districts the new, more challenging tests would be the first indicator of how they’re faring with the new standards and of students’ capability to take a test on computers. They also would provide a dry run of the technology that schools will need in place a year later. Deasy said the results of the field tests would be used “without stakes or consequences” for teachers and schools but would very useful information nonetheless.

Whether Duncan’s statement is the height of federal meddling or a valid preemptive effort to avoid a conflict, it’s the latest clash over differences in policy and personality. Gov. Jerry Brown has been a caustic critic of federal testing and interventions under No Child Left Behind and he refused to consent to the state’s application in the Race to the Top competition. He also declined this year to seek a state waiver from No Child Left Behind, notwithstanding its potential benefits, on the grounds that it would further entangle California in commitments involving teacher evaluations.

Related Posts
Posted by smf at 8:57 AM