With the curriculum, coming soon to California, students and teachers are discovering new ways of reading, thinking and communicating with one another. 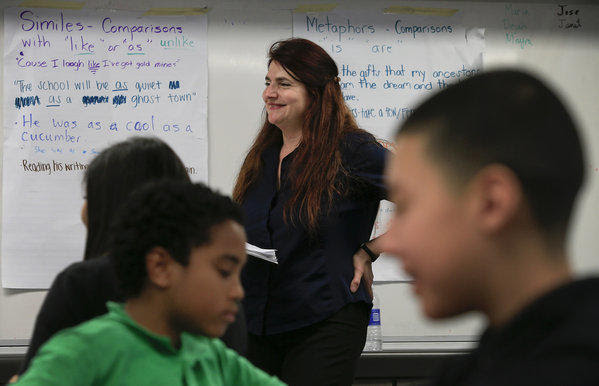 Teacher Vivian Hanson watches while her students work on a class project in her 7th grade Language Arts a class at Santiago Elementary School in Santa Ana. Hanson is using the Common Core learning standards, which promote critical thinking. (Los Angeles Times / May 30, 2013)

September 19, 2013  ::  I used to be afraid of the Common Core, a national effort to align public school curriculum goals across state lines and provide better tools for measuring what students are learning. I feared the new standards would lead to my students failing and that I would be scapegoated for those failures. But after two years of working with the Common Core in my Boston classroom, I'm a convert.

Teachers in California, where Common Core is being introduced, are probably as nervous about the changes as I was. And there's no question that the new standards require major adjustments to teaching. But I believe that California educators, like those of us in Massachusetts, will ultimately find that the changes are good for students and teachers alike.

That said, the first year wasn't pretty. I struggled, and so did my students, and when it came time for the first assessment exams of the year, my kids bombed. My ego was bludgeoned and my students were frustrated with the new types of questions used in the exams. I was afraid I would be viewed as an ineffective teacher, but thankfully, my principal remained unwavering in his support of the staff. He knew the transition would take time, and he wasn't looking to blame teachers.

As I got more familiar with the new curriculum, I began to appreciate it. One key component of the new standards for English is the inclusion of more nonfiction texts. This doesn't mean my students aren't reading novels; it just means they're reading nonfiction alongside the fiction, which I've found helps spark great discussions.

Last spring, for example, as my eighth-graders read Tim O'Brien's powerful Vietnam War novel "The Things They Carried," they also read primary source materials from the wars in Iraq and Afghanistan. They drew their own connections between those wars and O'Brien's Vietnam.

One student, for example, read O'Brien's sentence: "We went to war because we were ashamed not to." He then raised his hand. "Isn't that why a lot of people are upset about the wars in Iraq and Afghanistan? Because they don't understand why we're going to war?"

That kind of discussion occurs naturally with the Common Core. Previously, nonfiction would have been a separate unit of study. But I've found that this new way of integrating it with the novels students read helps them make connections between literature and the real world.

Moreover, the new curriculum helps students build the kind of educational scaffolding that will serve them well in high school and college. This is important for all kids, but it's particularly important at high-poverty, historically underperforming urban public schools such as the one where I teach.

Over the last few weeks, several of my former students, now in high school, have come back to visit. One of them went on to an affluent suburban high school as part of a local program that enrolls Boston students in schools outside the city. He reported that, at his new school, classroom discussion is a large part of the English curriculum. "I'm glad that last year we did a lot more talking than we used to," he said, "because I feel comfortable now."

The Common Core also pushes students to be better writers. Early last year, my students read "Catcher in the Rye," and alongside it they read psychology texts that helped them understand the turmoil Holden Caulfield was feeling. I knew my students had gripping stories of their own to tell, but many were afraid of opening up. So, to complement the book and our discussions, I invited adults from across the school, including the principal and the guidance counselor, to come into the classroom and share stories from their lives.

The process created a safe space that allowed my students to open up in their own writing. One, whose mother had died of cancer when he was young, wrote about his last conversation with her. He read it aloud in front of the entire middle school, breaking into tears and bringing many of his classmates and teachers to tears too. He received a standing ovation.

That kind of experience doesn't grow out of skill-building, or meeting standards, or preparing for a test. But it is what becomes possible when students are pushed to think and talk with their peers and teachers, in depth, across a range of subjects. That's what Common Core does.

Of course there are problems. We lack the kind of resources we used to have to help prepare students for standardized assessments. At my school, we've never taught to the test, but we did use our long experience with the yearly exams to build a curriculum that allowed our students to succeed. Now I feel like I'm flying blind when it comes to helping students prepare for their year-end assessments. We know they're coming, but we don't know much about them. It's imperative that administrators understand, as my principal does, that it may take time for the benefits of the new curriculum to be fully measurable.

I'm convinced the kinks will work themselves out and that teachers shouldn't fear Common Core. What I'm doing in my classroom now just feels so much better, and two years into the Common Core, I am a better — and happier — teacher than I've ever been.

You’re watching a movie. Weird things are happening on the screen in the middle of reel one.

A character says; “Don’t be afraid”.

Hold onto your popcorn!

“They described themselves simply as local teachers who favored school reform — one sympathetic state representative, Mary Ann Sullivan, said, “They seemed like genuine, real people versus the teachers’ union lobbyists.” They were, but they were also recruits in a national organization, Teach Plus, financed significantly by the Bill and Melinda Gates Foundation. “