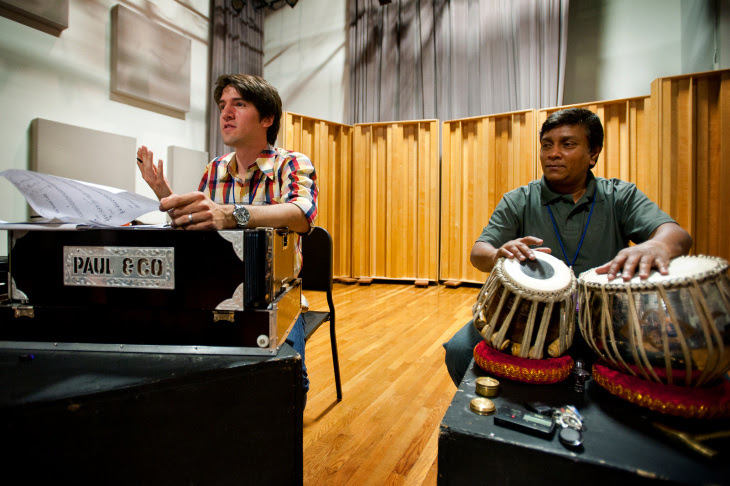 September 26th, 2013, 1:45pm  ::  Only about a third of high school graduates reported taking an arts class or lesson in childhood, according to a new national survey out Thursday, but rates increased with more education.

More than half of college graduates - 59 percent - said they'd taken an art class or lesson in childhood.

The survey is the sixth of its kind from the National Endowment of the Arts, which partnered with the Census Bureau to produce the 2012 data.

The most common class was music lessons. Of adults who said they'd received arts classes as a kid, 36 percent reported playing an instrument, 19 percent participated in visual arts and 18 percent took an arts appreciation or art history class.

"This iteration of the Survey of Public Participation in the Arts is our most comprehensive look yet at the myriad ways art works for Americans," NEA Senior Deputy Chairman Joan Shigekawa, said in a statement.

The percentage of adults who reported participating in arts education through "classes, lessons, or through informal instruction (from friends, family tradition, or teaching oneself)" at some point in their lives was 56 percent.

The Los Angeles Unified School District, which serves about 650,000 Southern California students, does not provide arts education to all students. The district estimates students on average spend 2 percent of their K-12 careers learning about the arts.

Arts education is just one facet of the NEA survey. It also looked at attendance rates for art events and asked adults whether they read novels or poetry, among other things. The group said it'll release more results next year.

The Survey of Public Participation in the Arts was first conducted in 1982.

WASHINGTON, DC—How do Americans participate in the arts in the course of a year? What kinds of art forms and activities do they engage with, and in what numbers? The NEA investigates these questions and more in the 2012 Survey of Public Participation in the Arts (SPPA), the nation’s largest population survey of arts participation trends. Today the NEA released an initial report of the survey's findings. A more comprehensive report will be available in 2014.

“One of the most important things we can do as the National Endowment for the Arts is to understand how our nation engages with the arts,” said NEA Senior Deputy Chairman Joan Shigekawa. “This iteration of the Survey of Public Participation in the Arts is our most comprehensive look yet at the myriad ways art works for Americans.”

A Yardstick for Arts Engagement

The NEA has partnered with the United States Census Bureau six times since 1982 to conduct the SPPA. The 2012 survey asked a nationally representative sample of adults ages 18 and older if they had participated in five broad categories of arts activity in the past year: attending, reading, learning, making/sharing art, and consuming art via electronic media.

Within the arts attendance category, the survey collected data on performing arts events; art museums, galleries, and visual arts events; destinations with historic or design value; and movies. In the reading category, the survey measured reading rates for literature (novels or short stories, poetry, and plays), as well as reading rates for any book (fiction or nonfiction) outside of school or work. The art-making or art-sharing category gathered data on dance; photography; various types of music; film/video; the fiber arts; leatherwork, metalwork, and woodwork; scrapbooking; creative writing and books in general; the visual arts; pottery, ceramics, and jewelry-making; theater; and opera. The survey also asked about electronic consumption of books and literature, the visual arts, dance, theater, opera, and various types of music. In addition, the survey asked people if they had taken an arts class or lesson in or out of school, or had learned arts subjects through some other means.

For the 2012 survey, the NEA doubled the sample size in order ask more questions and discover new patterns of arts engagement. The NEA developed the new questions through dialogues with researchers, policymakers, and practitioners in the arts. Since the survey captures more art forms, it also captures more people who are participating in the arts.

This initial analysis of the 2012 SPPA shows that large segments of the U.S. adult population reported taking part in at least one kind of arts activity. A closer look at the data reveals subtle shifts in demographic and behavioral patterns that occurred since 2008, the previous survey year.

As of 2012, roughly half of all adults had experienced some arts learning at some point in their lives, whether through classes or lessons, in or out of school, or outside of formal instruction. But disparities persist by gender, race/ethnicity, and level of general education. For example, a college graduate is nearly twice as likely to have taken an art class or lesson in childhood than a high school graduate (59 percent compared to 32 percent). Meanwhile, adults of all racial and ethnic backgrounds reported similar rates of taking arts classes or lessons in the last year.

Next year, the NEA will release a full report with in-depth findings including more geographic and demographic details for arts engagement among U.S. adults. Beyond today's highlights report, the entire survey questionnaire, raw data, and user's guide are available to researchers and the public at arts.gov.

Big data presents big challenges, and the SPPA is no exception. Consequently, the NEA is issuing a challenge to create interactive visualization tools to make the 2012 SPPA more accessible to the public. This challenge seeks to help researchers, academics, and the media explore and explain the reach of the arts in American life.  More than $20,000 will be awarded to select contestants; learn more when the SPPA Challenge goes live on September 30 at Challenge.gov.

The SPPA and its host survey instrument, the Current Population Survey, include a wealth of demographic information that can be mined for detailed characteristics of arts participants. Researchers are encouraged to analyze the SPPA through the NEA Research: Art Works grant program; the next deadline is November 5.

The NEA is the only federal agency to conduct long-term and detailed analyses of arts participation. For more than 30 years, the NEA Office of Research & Analysis has produced periodic research reports, brochures, and notes on significant topics affecting artists and arts organizations, often in partnership with other federal agencies such as the U.S. Census Bureau and the Bureau of Labor Statistics. The NEA is committed to extending the conversation about arts participation by making data available to both the research community and the public at large.

About the National Endowment for the Arts

The National Endowment for the Arts was established by Congress in 1965 as an independent agency of the federal government. To date, the NEA has awarded more than $4 billion to support artistic excellence, creativity, and innovation for the benefit of individuals and communities. The NEA extends its work through partnerships with state arts agencies, local leaders, other federal agencies, and the philanthropic sector. To join the discussion on how art works, visit the NEA at www.arts.gov.