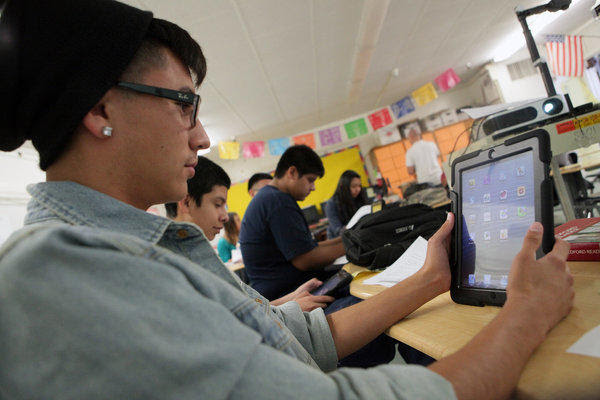 September 30, 2013, 4:53 p.m.  ::  Los Angeles school officials have taken back iPads from students at Westchester and Roosevelt high schools and possibly other campuses as well until further notice, the latest fallout from student hacking of the devices.

The move is the latest complication in the early stages of a districtwide rollout that will provide an iPad to every student as part of a $1-billion technology plan.

Staff at Roosevelt in Boyle Heights and students at Westchester confirmed that the $700 tablets were taken back Friday by school officials. But a Roosevelt teacher said only about two-thirds of about 2,100 tablets were returned.

A week ago, district administrators were scrambling to respond when they learned that students skirted security measures that were intended to block free browsing of the Internet. In interviews, students said they had been disappointed at their inability to get to social networking and music streaming sites. Their work-around involved a couple of clicks — and soon hundreds of students were reaching any website they wanted.

The district tally of hackers was 260 students at Roosevelt, 10 students from Angelou Community High School in South Park and 70 at Westchester High. The numbers could be higher, based on reports from students and employees at the campuses.

The district did not respond immediately Monday afternoon to questions about students having to surrender the devices.

Rather, officials focused instead on the issue of when students could take them off campus again.

"We don't have a firm timeline on when students can take the devices home yet," spokesman Thomas Waldman said in a statement. "We are working with Apple to develop a solution. In the meantime, our team is working with each school to assist them with options for allowing students to use the devices at their school only."

Last week, officials said that security was only an issue off-campus and that the devices could and would be used at school.

But on Friday, students were directed to turn in the devices indefinitely.

"They carted them out of every classroom in sixth period," Westchester senior Brian Young said Monday after school. "There has been no word of when they’ll be back."

He added that teachers were talking about the possibility that the tablets might not return until late December, although administrators were making no such predictions, he said.

At Roosevelt, "we don’t know when or if we will able to use the iPads again for classroom instruction — this week, this semester or this year,” said Lisa Alva, the coordinator for academic services to low-income students.

The administration told her that it had collected only about two-thirds of the iPads from students by the end of school Friday. If that's true, then many students also may have been violating the recent instructions to keep the iPads on campus.