A SHOWDOWN ON COMMON CORE TESTING: Neither California nor Education Secretary Arne Duncan can claim the high ground in their clash over new standards tests

Editorial By The Times Editorial board |http://lat.ms/187mzFq 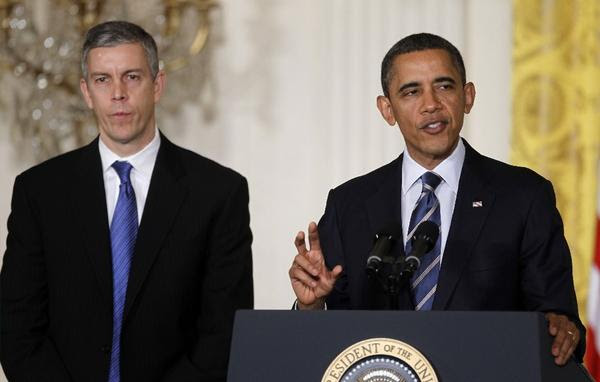 California and the Obama administration disagree on standardized testing during the state's transition to the Common Core curriculum standards. Above, President Obama is seen with U.S. Education Secretary Arne Duncan in 2012. (Pablo Martinez Monsivais / Associated Press)

September 16, 2013  ::  When it comes to education policy, California and the Obama administration have gotten along about as well as the Clantons and the Earp brothers. They've clashed over teacher evaluations, Race to the Top grants, you name it. Now, the switch to the new Common Core curriculum could prove to be their O.K. Corral.

The Legislature has passed a bill, AB 484, that would retire the state's existing standards tests this school year and replace them with a limited version of the very different tests linked to the new curriculum, which emphasizes critical thinking over rote memorization. Though the Common Core standards are supposed to be in place in the fall of 2014, with tests in the spring of 2015, California and most of the other 44 states that have adopted the curriculum are trying to get an early start. That's wise. It will take a couple of years for schools to master this new way of teaching and testing. What California hopes to do — as laid out in AB 484 — is to offer a practice run of the new standards tests this school year, but only in districts that have the technology in place to administer the computer-based exams, and without counting the results as an official measure of school progress.

But this limited testing regimen isn't in keeping with the mandates of the No Child Left Behind Act. California would ostensibly need a federal waiver.

Enter U.S. Marshal — er, Education Secretary — Arne Duncan, with his education reform guns blazing. He takes a dim view of AB 484 because not all students would take a test this year, as the law requires, and because the state would not release the results of this practice run, either publicly or to the federal government. That would keep the Department of Education from using the scores to determine whether schools have met their targets under No Child Left Behind. California Supt. Tom Torlakson says the state will not back down, even though Duncan is threatening to withhold some or all of the approximately $1.5 billion it receives each year in federal Title I funds.

This is one showdown in which neither side can claim the high ground. California should test all of its students, providing pencil versions for those in districts that don't have the technology for the computerized version. After all, pencils will still be a part of the testing scene for a few more years, and Torlakson's explanation — that the state lacks the funds to test all students — doesn't hold water. But the bigger problem is Duncan's insistence on using these tests to measure school growth in 2014, the year when all schools are supposed to be at 100% proficiency under No Child Left Behind (cue the laugh track). That's not a legitimate use of the untested tests, which should have no official standing this first year.

Duncan is allowing other states to try out the new test on 20% of their students and not have the results count, but the other 80% have to take the old tests. California's proposal makes more sense; it would be counterproductive to test any students using the old tests. Teachers won't be able to focus on the challenging new material if they're being judged on the old. Duncan is acting the fussy bureaucrat here, enforcing the letter of what he admits is a bad law rather than encouraging better education. One year without No Child Left Behind data is minor.

The Obama administration would be on shaky political ground if it withheld a significant amount of California's Title I funds from the state's many disadvantaged students, and state officials may be betting that they're better off sticking to their guns. Duncan must be aware that the political consequences of a heavy-handed response might go far beyond his troubled relationship with California. The administration is hoping that Congress will pass a rewritten No Child Left Behind Act, but there already are hostile rumblings that the law — and Common Core in particular — are federal strong-arming of the states' authority over education.

The best solution, of course, would be for both sides to back off, drop their rhetorical weapons and figure out a fair and non-punitive way to get the new curriculum rolling and to get the state out from under the onerous, poorly written No Child Left Behind Act. The one true tragedy here would be a bad start on Common Core.