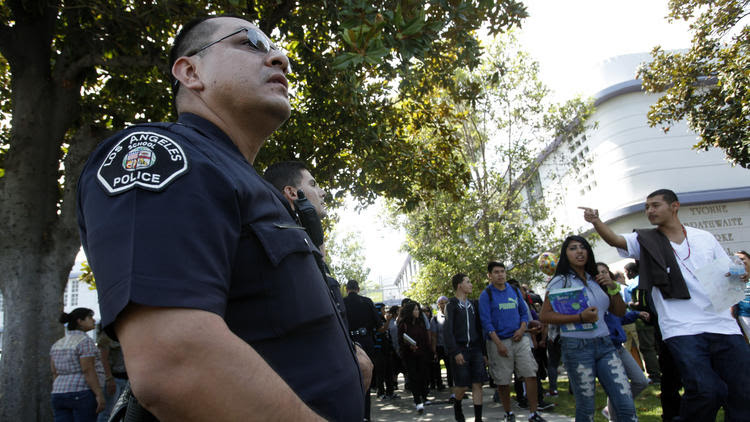 Set 12, 2014 2:14 pm  ::  So how about the curious finding that the Los Angeles Unified School District has taken possession of Pentagon military surplus that included 61 M16 assault rifles, three grenade launchers and a mine-resistant protective vehicle? (Almost makes you want to make up new lyrics to a Christmas song, doesn’t it?) And now that there are some answers, in a way they only raise more questions about what the role of school police departments should be.

I wrote about the military hardware briefly on Wednesday after the list was published by the website MuckRock, wondering what all this could be about (or whether it was indeed accurate) and promising to report back when I heard from the school district. The items were among MuckRock’s list of surplus Department of Defense items provided to law enforcement agencies, including school police departments, under the Pentagon’s 1033 program.

The list is indeed correct, said Steve Zipperman, chief of L.A. Unified’s police department. The vehicle is a new acquisition, given to the department this summer. The weaponry, though, was provided back in 2001 — and the department still has it.

Zipperman said that although the Pentagon identifies the three launchers as grenade launchers, civilian police call them less-deadly ammunition launchers. He assured me that the school police never had any intention of lobbing grenades at anyone, ever, an dthat they would not be used against students to launch anything. But as a police department, he said, LAUSD’s finest engage in mutual-aid pacts with other police agencies, and the ability to move those launchers out of storage might come in handy then. Those other police might use them to disperse crowds with tear gas or other low-level equipment, he said, but LAUSD police don't have any of those crowd-dispersal materals.

As for the assault rifles, Zipperman said they were converted to semiautomatic assault rifles -- why am I not feeling better yet? -- and are used to train a cadre of officers within the department. Those officers in turn are equipped with civilian semiautomatics, which are either kept in locked compartments within their patrol cars, or in more centralized locations, in case of a Columbine High School-type gunman attack.

He wouldn’t say how many of his officers had such assault rifles with them, only that they were “numerous.” And that’s a meaningful statement for a department this big: 405 sworn officers, the fifth largest law enforcement department in the county, and an annual budget of $59 million. They’re a 24/7 operation, Zipperman said, not only ensuring safety in and around schools during the school day and helping students get to school safely, but patrolling near campuses to protect against nighttime break-ins.

I had no idea.

And have no firm information on whether it’s a good idea or a bad one to have such a large and heavily armed police force for schools. In ways, the school district has been moving in a welcome direction toward being less police-enforcement oriented—for example, it decided in August no longer to have police cite teenage students for minor infractions.

But tragic events such as those at Columbine or Sandy Hook Elementary remain on our minds as possibilities. My assumption had always been that if there were such a horrific situation at a local campus, that was the time for the LAPD and/or the sheriff’s office to storm in. Zipperman says his officers would most likely be closer to the scene, but do we really know that? Has anyone studied it? It’s not as though the school police carry semiautomatics on campus, which is good to hear.

This much it seems to me we can say safely: The armored vehicle, though it might be a bit of an expensive waste, isn’t going to do any harm. If there were some terrible situation, it could prove useful to have such a thing, though the schools certainly seem to have lived without them up to now.

The grenade launchers have to go. Give them back. School police should not be seen as a wig-weaponry force out on the street, and other police departments will have enough personnel and equipment to launch their own tear gas. It’s downright unseemly for a school security detail to have a heavily militarized weapon.

As for the M16s—and the arming of an unknown number of school police with semiautomatic rifles—it’s harder to know. My first reaction is that this might be an example of unnecessary mission creep. What police department doesn’t like the idea that it needs the heavy-duty weaponry? Are local police forces truly unable to respond in a timely way to catastrophic situations on a given campus?

Perhaps they’re not. I don’t rule out the possibility. It would be a terrible thing if properly armed personnel couldn’t be at a campus quickly to save lives in the worst scenarios. But then I wonder: Looking over the long term of a couple of decades, would the same money used for M16s and the training and this robust a police force might save more lives if it were used on school counselors and student health? My guess would be yes, but that’s just a guess.

We also have to wonder whether we want school police to be seen more as a security division, seen by students as a friendly group of people there to protect them, or as a group of uniformed people not to be messed with? The latter isn’t necessarily wrong; these police work in some rough neighborhoods, and it could be that bad people who might hurt students need to think of school police with a heavy sense of respect.

This is certainly a question worth debating. I’m not sure whether the public is aware of how big the mission of L.A.’s school police has grown, and what people make of it.