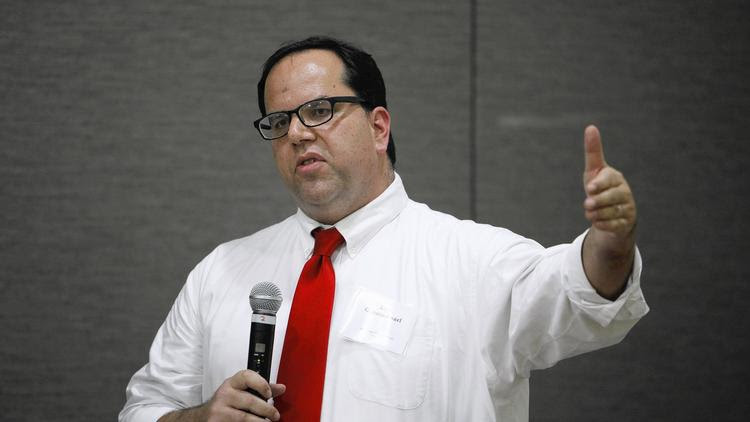 Sept 10, 2014  4:40PM  ::  Twelve former Crenshaw High teachers alleged during opening arguments in a labor hearing Wednesday that the Los Angeles Unified School District targeted and removed them from the campus in retaliation for their union activism.

In 2012, the district reorganized the struggling but storied South Los Angeles school, breaking it into three magnet campuses. Teachers were required to reapply for their jobs, and the 12 —  among them United Teachers Los Angeles President Alex Caputo-Pearl — were not asked to return.

The teachers union filed an unfair labor charge with California's labor oversight board, which issued a complaint that led to the hearing before an administrative law judge.

Atty., Dana Martinez, who represents UTLA, contends that the firings were a blatant attack on union members, a deliberate attempt by Supt. John Deasy to rid Crenshaw of outspoken teachers and a push for a more compliant faculty.

"This is a case about discrimination and retaliation," Martinez said. "LAUSD used this magnet conversion as an opportunity to cleanse its school of its strong union activists."

Attorneys representing the district contend that the move had nothing to do with union activity but was based on a host of education-related issues involving the teachers, among them: differences in ideology, opposition to magnets, a refusal to commit to additional training, or a connection to failing programs at the school.

It was imperative that the district take action to change the culture of low achievement on the campus and rebuild the school, said attorney Aram Kouyoumdjian, who is representing the district.

He dismissed the argument that L.A. Unified would overhaul an entire school simply to target UTLA members.

"Crenshaw was a failing school. The notion that was used as a reason to make staffing changes that somehow retaliated against individuals is a very cynical view," he said. "The alternate view was the district should have let Crenshaw remain a failing school and leave the staffing there and structure there intact."

Martinez said the level of achievement at the school is irrelevant to the case. The focus should be the process by which the district selected the staff at the magnet schools, she said. The union contends that the hiring process was a sham controlled behind the scenes by Deasy to rid the school of activist union members. The district contends that Deasy was not involved.

Caputo-Pearl, a history teacher elected as UTLA president this year, has long been an outspoken critic of the district's changes at Crenshaw. He helped organize student protests and brought community organizations together to rally on behalf of teachers.

Caputo-Pearl also drew criticism that he was an impediment to progress at Crenshaw.

In 2006, he was involuntarily transferred for allegedly halting reform efforts by driving out a principal. He was reinstated after an outcry by the union and others.

Caputo-Pearl took the stand Wednesday, his testimony largely establishing his role as a union representative during his time at Crenshaw, his activities leading up to the change to a magnet, including his involvement in rallies and protests against the change and his interview for the position at Crenshaw.

He recalled a meeting with Deasy at the office of the late board member Margueritte Poindexter LaMotte, where Deasy announced that the school would be converted to a magnet.

Caputo-Pearl said Deasy told those present that all teachers would reapply and those who were a good fit would return. Caputo-Pearl said he took that remark as a warning that those who did not go along with Deasy's wishes would not be hired.

"My impression was that he meant people who would go along with the program and comply with things without raising questions," he said.

Caputo-Pearl said Deasy at one point remarked that he did not want a "war" on campus.

Caputo-Pearl also testified that he has yet to receive an explanation as to why he wasn't selected.

Martinez said further testimony will show that Deasy expressed a strong dislike of UTLA and its activists and will clearly demonstrate his motivation to remove union activists who challenge him.

The union is seeking remedies for losses suffered, the option to return to Crenshaw in the same assignment and appropriate attorney fees and costs.

Witnesses will testify that Deasy on several occasions singled out Caputo-Pearl as an "obstacle," Martinez said.

Crenshaw, for much of its nearly five decades, was known for its championship athletic teams, arts and music programs and sending graduates off to top colleges.

But in the years prior to the change, the campus declined. It had the district's lowest Academic Performance Index score; a rating based on standardized test results. . The school lost students, with many choosing other district schools or independent, publicly funded charter schools. Deasy called it one of the district's biggest disappointments.

It was not the first time that Crenshaw drew attracted L.A. Unified's attention. Other efforts to turn around low achievement failed. In 2005, the school lost its accreditation in a bureaucratic snafu. It also failed to receive a state academic rating for failure to test enough students.

Caputo-Pearl contends that Deasy purposely set aside a promising attempt at change, called the Extended Learning Cultural Model, which involved training teachers on the culture of their students to assign more relevant projects. It was crafted with the help of community members and local colleges. The program attracted hundreds of thousands of dollars in outside financial support.

Kouyoumdjian said that since the change to a magnet school, attendance has been up and suspensions have dropped. The school's accreditation, which it regained on a year-to-year basis after losing it in 2005, has been extended three years

"The school is improving," he said.

“The district contends that Deasy was not involved.”  Where have we heard this before? The superintendent seems spectacularly “not involved” in an awful lot of places where his fingerprints seem to be at the scene.