September 4, 2014 2:12 pm :: After months of bargaining talks with LA Unified, the teachers union, UTLA, today submitted its first contract demand within the course of current negotiations.

In a document submitted to the board this morning, the union called for discussions of various subjects, including salaries, teacher evaluations and discipline at its next bargaining sessions, according to a district staffer who read the two-page letter to LA School Report.

Chief Labor Negotiator Vivian Ekchian, said in an interview she was “very pleased to have received their initial proposal.” She declined to discuss any of its content.

The letter, sent by UTLA President Alex Caputo-Pearl to the board, did not elaborate on salary demands, which the district contends it has not formally received. Caputo-Pearl says the union made it clear to the district long ago what it wants.

The proposal comes on the heels of the district’s new deal with the Lieutenants and Sergeants School Police unit, whose contract was approved last night in a unanimous vote by unit members.

LA Unified has also completed negotiations with six other labor groups, most of which agreed to a similar salary increase package: a raise of 2 percent for 2014-15, 2 percent in 2015-16, and another 2.5 percent in 2016-17. Each annual pay bump is contingent on funds available.

While some groups also received a 2 percent lump sum payment for the 2013-14 school year, others tailored the additional payment to suit different preferences.

The raise UTLA is seeking over the next two years is nearly double what other groups have received over the span of three years. Superintendent John Deasy and other district officials say that could ultimately bankrupt the district.

Further, a “me too” clause included in most of the signed agreements allows a union the opportunity to re-open salary negotiations should the school board approve a higher general percentage increase for another group.

The UTLA proposal was distributed to staff and board members. More than a petition of specific demands, it is a document that lists subject areas the union leadership wants to discuss in future bargaining talks.

The subjects generally follow those included the last contract, such as terms, conditions and compensation for employment as well as language that would define teacher rights, grievances and assignment rules.

At the very least, by addressing what the union wants to talk about rather than listing specific demands, the union appears to be taking a slow-go approach to negotiations, which are now playing out against a backdrop of growing criticism of the district for issues related the iPad and student-computer tracking system.

The pace of negotiations is also allowing the union leadership to build a sense of unity among teachers in case Caputo-Pearl recommends a strike, which he has often threatened.

In any case, the district today updated the agenda for its next meeting, on Sept 9, adding a discussion of the UTLA proposal as the first item of business. 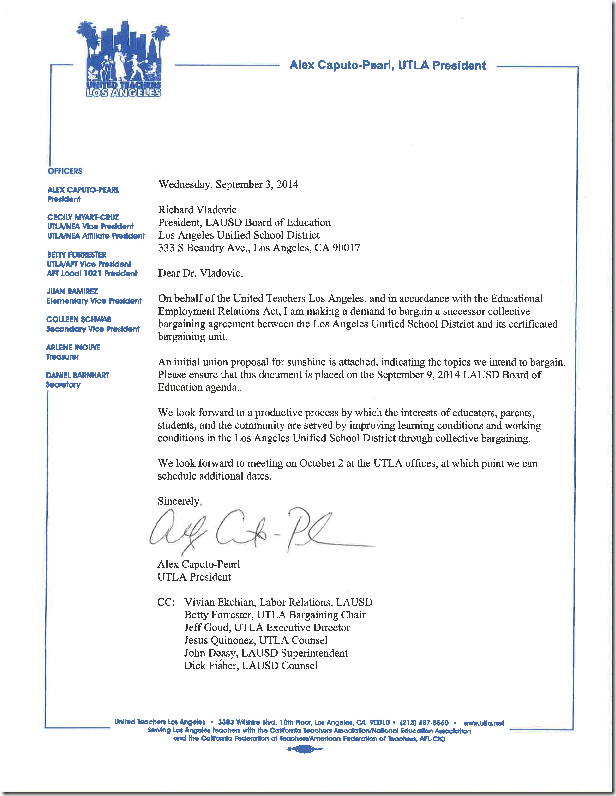 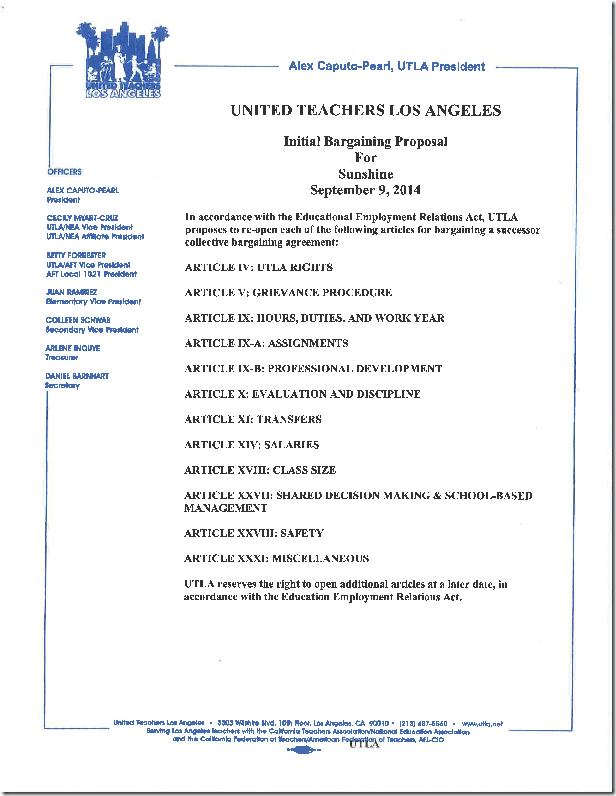