A good school library is not in conflict with technology; it can enhance our understanding and use of it

Op-Ed By Rebecca Constantino in the LA Times |  http://lat.ms/1uEk1L7 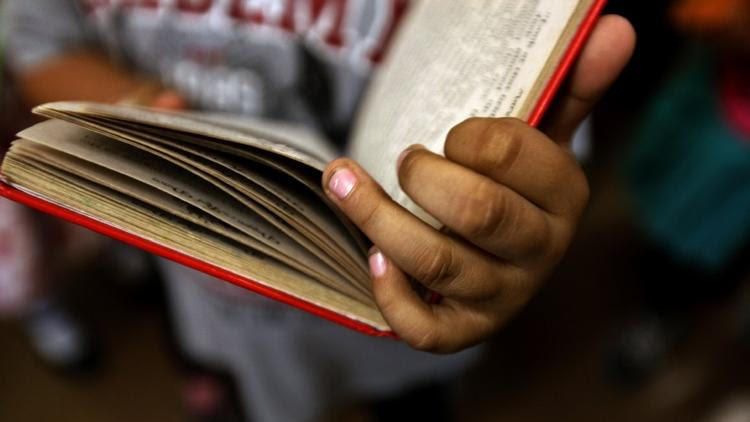 Sept 15, 2014  ::  Like Supt. John Deasy and others in the Los Angeles Unified School District, I am concerned about the educational civil rights of the district's students. While the iPad-for-every-student controversy has gotten much media coverage lately, a long-term problem has gotten very little attention: the lack of equal access to a quality school library. A 19-month investigation by the U.S. Department of Education's Office for Civil Rights concluded in 2011 that thousands of LAUSD students were being denied equal educational opportunities, which included libraries with sufficient books and staffing.

Although the research is inconclusive regarding the results of providing every child a laptop, it is overwhelmingly positive for providing students well-stocked, well-staffed school libraries. In fact, an internal LAUSD memo from June attests to "the correlation between student achievement and well-staffed and well-stocked school libraries. This correlation is documented in many longitudinal studies. Access to such libraries is a necessary tool for student achievement and the implementation of the Common Core."

The district has not provided significant funding for school libraries since 1997. The funding provided in the past was measly and later slashed. Although there are some well-stocked school libraries in the district, this is a result of parental support and fundraising. According to district records, LAUSD provides no funding to provide current and up-to-date print and electronic collections. There is no significant funding at the state or federal level.

A great library includes not only a great collection but also a well-trained, enthusiastic staff. In the district, the ratio is one teacher-librarian to nearly 6,000 students. Elementary schools that have libraries that are open staff them with aides who work, on average, three hours a day and not every day in some schools. This leaves no time for real interaction with students, staff and the collection.

For many people, the school library seems old-fashioned and even unnecessary in this electronic age. However, the research and kids don't support that notion. Across the United States, studies have shown that students who have access to high-quality school libraries learn more, get better grades, score higher on standardized tests and enjoy reading more. Many students tell me that a well-stocked library is the best thing about school. One fifth-grader said, "I never knew about so many great things until I got to find out about them in the library." Another called the library "magical."

I've asked many students: If they had to choose, would it be a laptop or a library? Overwhelmingly, they choose the library. "Man, someone who wants to do that doesn't know about kids. We all want the library," said one. Many reported fatigue from reading on a tablet. They still want to hold a book, flip the pages.

Two significant findings have resulted from studies comparing reading on a tablet versus reading a book: Adults and children skim more and comprehend less when they read on a tablet.

Many of the students whose civil rights are being violated based on the quality of the school library have little, if any, access to print materials. They have few books at home, and for many, the public library is inaccessible. For some students, the bus trip to the library is long. Many students tell me they would love to go to the public library but the one near their home is "scary."

"There are a lot of homeless people and I am really afraid. Plus, my parents won't let me go alone," a student in Hollywood told me.

A school library is not in contradiction to technology but rather should enhance our use and understanding of it. Effective school libraries are more than books. They are hubs of learning with well-trained and well-supervised staff. The school library is one of the best options for addressing the civil rights of our students.

Rebecca Constantino is the founder and executive director of Access Books, a nonprofit dedicated to improving the quality of school libraries.

I cannot and will not argue with anything Rebecca says above.

But it is the unsaid and unwritten that must be addressed. The books-to-student ratio, the number of shelf-feet per library, the hours of access and the age and the relevancy of the collection, the inventory of fiction, non-fiction and reference books – the technology and the catalog and all the rest are meaningless without paid professional staff to operate the library.

The library is the most important classroom in the school, but a library without a librarian is a book room.

Up until recently LAUSD-under-Deasy has been unwilling to fund librarians. If a school wanted a librarian (called a library aide in elementary) they had to find the money somewhere to pay for one. Couch-cushion money, washing machine money, bake sale money. Spare change.  Do you want a counselor? Do you want a nurse? Classroom aides, enough paper towels and toilet paper to last all year? like that.

Now the District is out hiring lots of three hour a day library aides– with three (count ‘em) three hours of training – to staff libraries. Library aides are not security aides with an orange vest and a roll of stickers – they are paraprofessionals whose qualifications, duties and responsibilities are defined in the Ed Code. Three hour employees don’t get benefits yet they are responsible for a couple of hundred thousand dollar inventory of books – and they must do allthe wonderful things Rebecca outlines for not quite a living wage after three hours of training.

That the District is funding the positions is good news, make no mistake. But it’s nowhere near good-enough news.