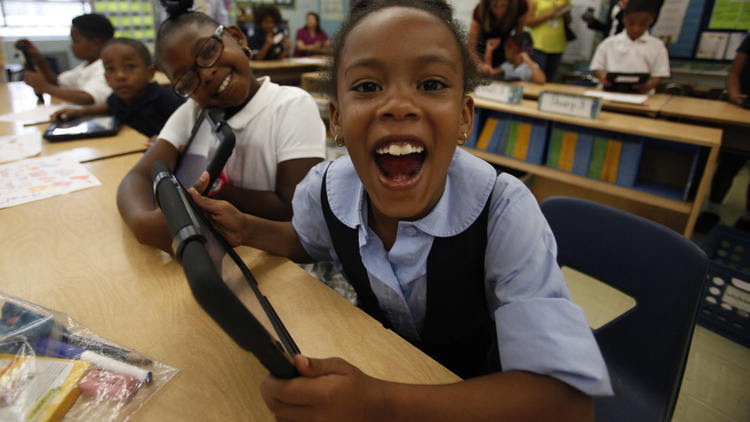 Tiannah Dizadare smiles as she and a school mate explore the possibilities with their new LAUSD provided IPads. (Bob Chamberlin / Los Angeles Times)

18 September 2014  ::  In the first formal evaluation of the troubled iPads-for-all project in Los Angeles schools, only one teacher out of 245 classrooms visited was using the costly online curriculum. The reason, according to the report, was related to the program's ambition, size and speed.

The analysis found that district staff was so focused on distributing devices that little attention was paid to using iPads effectively in the classroom.

The report, conducted by an outside firm at the request of the school system, was intended to provide an early assessment of the program, which began last year at 47 schools.

Among the issues cited at several schools: high school math curriculum wasn't provided, efforts to log in and access curriculum were unsuccessful and at least one school said it preferred the district's own reading program. Four out of five high schools reported that they rarely used the tablets.

"The overarching theme of comments ... was that deployment of devices on this scale and pace had never been attempted before in the district, and that [teachers and others] had to learn and adapt as the project unfolded," the report said.

A district leader who was not identified said: "We didn't have enough people so everyone was working on deployment ... that really, really impacted our professional development [training] rollout, in fact we barely had one because of that."

The review, conducted by a nine-member team from the Washington, D.C.-based American Institutes for Research, offers a sharp contrast to early pronouncements from the school district on the $1.3-billion effort. In particular, Los Angeles schools Supt. John Deasy labeled the project "an astonishing success" and officials faulted media reports for suggesting otherwise.

Last month, Deasy suspended new purchases under the iPad contract and relaunched the bidding. His close ties to Apple, which makes the tablet, and Pearson, which provided the curriculum on the iPad, are under scrutiny by the school system's inspector general. Deasy has denied any impropriety, emphasizing that he recused himself from the bidding because he owned Apple stock.

The nation's second-largest school system has purchased 109,000 iPads so far; 62,000 contain the Pearson curriculum. It was left off devices purchased late last year for use in state standardized testing. To date, the district has spent $61 million on the iPads, including carts to charge them.

"We had a vision to have a device in the hands of every LAUSD student to close the digital divide. This is still our vision," Lucas said in a statement. "All of our students — not some, but all — should have the same access to the learning tools they need to achieve in the 21st century."

Officials said they will incorporate suggestions from the report into their day-to-day practices and planning. This includes creating a plan to help high schools make better use of the iPads.

The curriculum, which cost L.A. Unified about $200 per device over three years, was among the biggest problems identified by schools.

In May, researchers visited 245 classrooms in a sample of 19 schools. The Pearson curriculum was being used in one classroom — for a lesson on fractions.

An administrator from one high school noted that the curriculum did not contain high school math.

"At nearly all schools, staff stated that the Pearson curriculum that was promised during initial ... trainings was not available during the school year," the report said.

Administrators at three schools told reviewers that at the lower grade levels, parts of the English curriculum were missing, including the one for narrative writing. And leaders at two other schools said that math sections were not available, according to the report.

A participant from one school thought the English curriculum was effective but said that "their technology component… doesn't back up their lessons very well; we have to go ahead and do our own on the side using other apps."

There were also complaints about the Pearson materials loading slowly. And five schools reported issues with logging in and accessing their Pearson accounts — all of which hampered their efforts to use the curriculum.

One elementary school characterized the curriculum as lacking rigor. It favored the district's existing reading program.

There is no indication that Pearson violated its contract with the district. The agreement allowed the company to provide a sample of lessons and then expand the offerings over the course of the year. Pearson is one of the nation's largest suppliers of electronic curriculum and has received good marks in some other school systems.

But the report said that making such an effort work "requires more than a commitment to purchase and disseminate the equipment. Rather, it is a process that unfolds over time through the sustained efforts of district and school leaders and teachers."

Although use of the iPads was inconsistent and far from universal, the report also noted that some students and teachers used them in interesting ways, practices that could be models for the school system.