“It isn’t how you play the game, it’s who keeps score that counts”: REPORT SHOWS VARIATION IN HOW STATES STACK UP AGAINST INTERNATIONAL STANDARDS

September 22, 2014 12:13 PM :: What states expect students to know varies widely and often falls short of international standards for learning, a new report from the American Institutes for Research shows.

Gary Phillips, a vice president and fellow at the Washington-based institute, examined the share of students meeting proficiency standards in reading, mathematics, and science in every state. He used international benchmarks to grade states by statistically linking state tests to the state National Assessment of Educational Progress (NAEP), then linking national NAEP to national Trends in International Mathematics and Science Study (TIMSS) or Progress in International Reading Literacy Study (PIRLS) data. 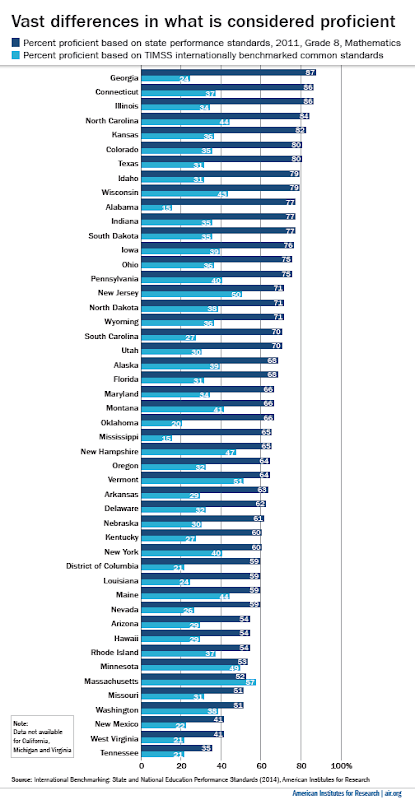 The problem stems from the patchwork of standards that emerged after the federal No Child Left Behind legislation gave states the flexibility to define proficiency with their own metrics—an approach that the report calls "fundamentally flawed and misleading."

Phillips discovered that states reporting the highest percent of proficient students had set the bar the lowest. More than two-thirds of the difference in state success is related to how high or low the states set their performance standards, according to the report.

The expectations gap is larger than twice the size of the national black-white achievement gap, the report said. The difference between the states with the highest and lowest standards represents a variation of three or four grade levels, according to Phillips.

"It represents a big opportunity-to-learn problem in states that set low standards," said Phillips in a phone interview. Without high expectations, students aren't challenged with rigorous courses, he added.

Phillips said he thinks the rollout soon of common standards in most states will help.

"The Common Core will give some consistency to what students are expected to learn and a high level of expectations," he said.

The current lack of transparency among state performance standards misleads the public because low standards can artificially inflate the numbers of students who are deemed to be proficient  and deny them the opportunity to learn skills needed for college and career, the report concludes.