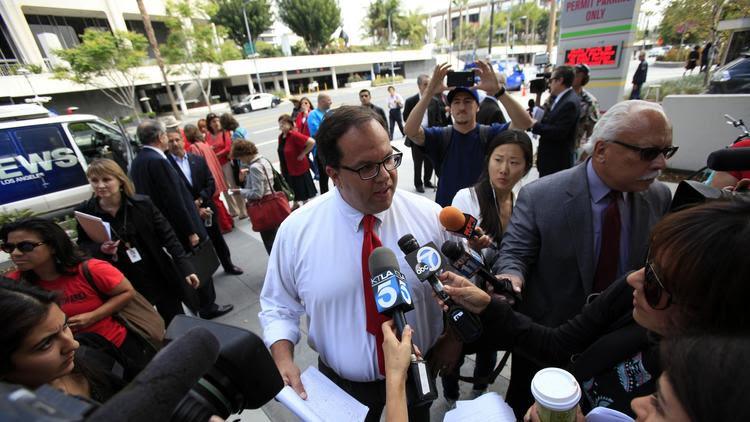 Alex Caputo-Pearl answers a question during a UTLA forum in June. The union president alleges he and 11 other Crenshaw High teachers were let go for union activism. (Francine Orr / Los Angeles Times)

Sept 25, 2014  |  6:25 pm  :: The principal of Crenshaw High School testified in a hearing Thursday that 12 former teachers who allege they were targeted and removed because of their union activism were let go from the campus for a variety of other reasons, including subpar instruction. 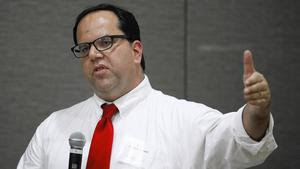 In 2012, the Los Angeles Unified School District reorganized the struggling but storied South L.A. school, breaking it into three magnet campuses. Teachers were required to reapply for their jobs, and the 12 — among them the current United Teachers Los Angeles president, Alex Caputo-Pearl — were not asked to return.

The teachers union filed a complaint with California's labor oversight board, which led to the hearing before an administrative law judge.

Attorneys representing UTLA contend that the dismissals were blatant attacks on labor and a deliberate attempt by Supt. John Deasy to rid Crenshaw of strong activists. The superintendent has not been called to testify.

An attorney for the district argued that the move had nothing to do with union activity but was based on various education-related issues involving the teachers. It was imperative that the district take action to change the culture of low achievement on the campus, the attorney said.

Principal Remon Corley testified that he alone had the final decision on staffing at the school and that teachers were not retained for academic-related reasons, including a lack rigor in their lessons, a lack of long-term devotion to teaching at the school, a connection to failing programs at the school, and chronic absenteeism or tardiness.

I was very concerned about the quality of instruction that students would receive in his classroom. - Remon Corley, principal of Crenshaw High

Corley said he had concerns about the quality of instruction in classes taught by Caputo-Pearl, who was elected UTLA president this year. Caputo-Pearl relied heavily on videos that were used more to entertain than educate, Corley said.

In observations of Caputo-Pearl's class, Corley said, he noticed a lack of engagement by the majority of students, no textbooks and months-old work posted on classroom walls.

"I was very concerned about the quality of instruction that students would receive in his classroom," Corley said.

But during cross-examination, attorney Dana Martinez, who represents UTLA, repeatedly asked Corley whether he disciplined, offered support or reprimanded the teachers for the behavior he would later use as the basis for not rehiring them.

Corley answered that he had not taken such measures with the teachers, including Caputo-Pearl.

Corley later said during questioning from an attorney representing L.A. Unified that the standard for disciplinary action is vastly different than that for staffing decisions.

Caputo-Pearl has long been an outspoken critic of the district's changes at Crenshaw. He helped organize student protests and brought community organizations together to rally on behalf of teachers. He testified that the teachers had developed proposals to improve the school and that they were being retaliated against because of their activism.

The union is seeking remedies for losses suffered, the option for instructors to return to Crenshaw in the same assignment, and appropriate attorneys' fees and costs.

A final decision in the hearing could take months.