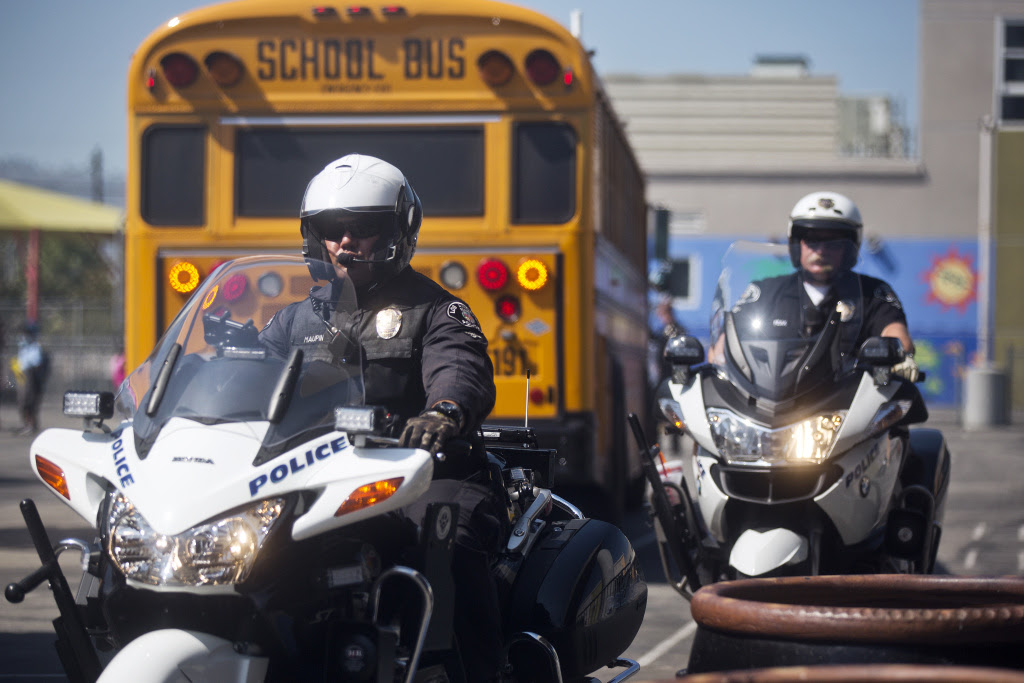 School Police aid in the relocation of students at George De La Torre Junior Elementary School on Tuesday morning, Sept. 23, after a fire broke out nearby at the Port of Los Angeles on Monday night. Maya Sugarman

"We have students that disappear from the system," said Carol Willis, assistant principal at Griffith Middle School in East Los Angeles. "We obviously cannot take attendance for a student who is not in the system."

"When will we know, in case of an emergency, our student data is accurate?" Zimmer asked the district's chief information officer, Ron Chandler.

Chandler said he didn't have deadlines for the updated software and emergency procedures on hand, but  promised to "have that by end of day tomorrow and communicate to all schools.”

The port fire started Monday night and sent billowing, dark smoke into the air. The fumes forced the closure of Saints Peter and Paul School and the evacuation of students at George De La Torre Jr. Elementary.

Chandler spoke for an hour on progress updating the data system, including plans for better server performance and increased technical support.

But several data accuracy concerns remain: special education, gifted and talented and advanced placement students as well as those learning English are affected, according to Chandler's report.

Transfer students and those applying to college have been impacted by errors in the transcripts generated by the new system. Technical issues are also affecting class ranking and credits.

Chandler said fixing transcript issues is top on a list of priority upgrades, as the deadline for college applications looms.

California State University campuses start accepting applications Oct. 1 for fall 2015 enrollment. Many of those schools, as well as University of California campuses, then close their application periods on Nov. 30.