Deasy “…is questioning whether he should step down.” 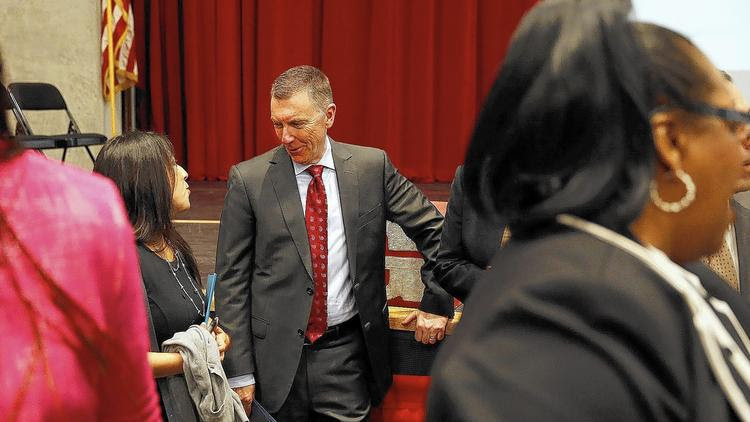 Supt. John E. Deasy says he and the L.A. Unified Board are no longer “united on the same mission and in the same way to accomplish this mission as when we started.” (Al Seib / Los Angeles Times)

Sept 13, 2014  ::  The controversy engulfing Los Angeles Unified's $1.3-billion technology project has inflamed long-held tensions between the Board of Education and Supt. John Deasy, who is questioning whether he should step down.

In an interview, Deasy acknowledged that the continuing focus on the project, which aimed to give every student, teacher and campus administrator an iPad, has hampered his effectiveness and eroded his support on the board.

"I have thought about whether I have the ability to do what I need to do effectively. I think about it all the time," Deasy said, adding that he no longer feels he and the board are "united on the same mission and in the same way to accomplish this mission as when we started."

'”There has never been a better, more effective superintendent of the LAUSD than John Deasy,”  Eli Broad says

The superintendent exposed the strain this week when he demanded emails between the board and technology companies, including those involved in the iPad program. Deasy requested the records to ferret out any potential ties. The superintendent is under scrutiny for precisely such connections between himself and those firms.

A highly critical report from a school board member, released last month, found that the bidding process may have had the appearance of favoritism toward Apple, which supplied the iPads, and Pearson, which provided the instructional software. Soon after, district emails were released that showed Deasy and former Deputy Supt. Jaime Aquino had begun discussing a possible contract with Apple and Pearson two years before the bidding for the project began.

Deasy suspended future purchases under the contract and relaunched the bidding.

The district's inspector general has begun a full investigation into the procurement process.

Deasy and Aquino have denied any impropriety.

But Deasy said in the interview this week that damage has been done.

"These topics have wounded my ability around aggressive leadership," he said.

School board President Richard Vladovic declined to speculate about whether Deasy's leadership had been compromised.

"Any distraction is a hindrance, but we're going to continue to move forward," Vladovic said.

Civic leaders and community groups that organized campaigns to press for Deasy's contract extension last year have not mounted any similar show of support. Leaders say they are still watching the situation.

Some have said they are cautious about launching a collective campaign to back Deasy until all questions are answered over the iPad deal. Some also said the issue has never sparked the passion of their members as much as, for example, equitable spending for needy children.

Some of Deasy's strongest allies said they still support the superintendent. 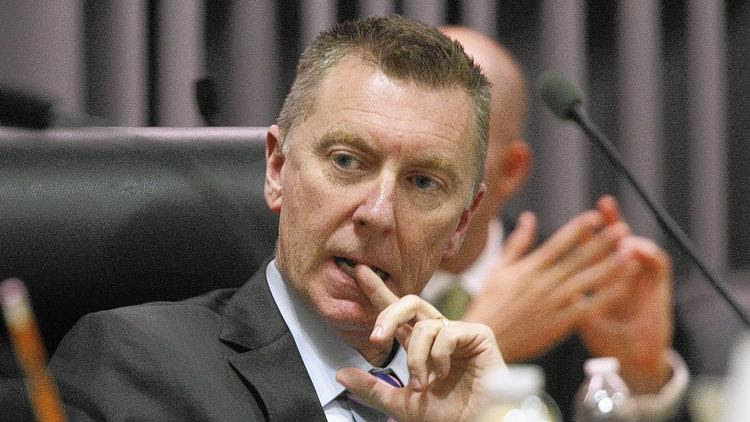 "In the 50 years I've lived in Los Angeles, there has never been a better, more effective superintendent of the LAUSD than John Deasy," philanthropist Eli Broad said in a statement. "I'm disappointed that John's detractors have seized upon this issue to further criticize his work and to attempt to derail the progress under his leadership. My support of John Deasy has never been stronger."

George Kieffer, chairman of the Civic Alliance — a network of leaders from major foundations and civic groups — said this week that the majority of members continue to support Deasy. He and leaders of such organizations as InnerCity Struggle and Community Coalition have credited Deasy with leading successful efforts to increase student attendance, graduation rates and completion of college preparatory courses, among other matters.

Kieffer said Deasy must take "ownership" of problems in the iPad rollout and resolve them.

But he and other allies also chided the school board for what they view as an excessive focus on the iPad project at the expense of issues directly tied to student learning.

Elise Buik, who heads United Way of Greater Los Angeles, said the iPad issue "is being used as a platform to personally attack" Deasy and called on all sides to refocus on student learning.

School board member Steve Zimmer rejected that criticism. He said his responsibilities required him to make sure the district was getting the best technology deal possible for the millions of public tax dollars being spent.

The investigation underway, he said, was not aimed at Deasy but at the "integrity of the process."

Zimmer also took issue with the perception that the board was not focusing on educational issues.

In the last few days, he said, he and Deasy have discussed how to stabilize schools facing declining enrollments, invest in dual immersion language programs and keep struggling students engaged in school through athletic programs.

Still, it is clear that fallout over the iPad project has weakened Deasy's position with the school board after months of relative peace during which they were able to forge key agreements to increase spending for needy students, improve discipline policies and rein in campus police practices.

Deasy always has had frosty relations with board member Bennett Kayser, the closest ally of the teachers union. Kayser's office complained early that Deasy made no effort to forge a working relationship, and any rapport now seems long beyond repair.

The superintendent reached out to board member Monica Ratliff after she was elected last year. Ratliff, however, was the author of the report critical of the iPad project, and their relationship appears to have been harmed by her unrelenting focus on it.

The superintendent's political allies had unsuccessfully targeted four current members of the school board for defeat in recent elections — Zimmer, Kayser, Ratliff and McKenna.

It was probably only a matter of time before Deasy had to deal with the fallout, whether it was over iPads or something else.

Stalled contract talks with the teachers union have only exacerbated Deasy's problems.

Deasy said he doesn't believe the union is willing to reach a deal with him — a point on which some of his supporters and critics agree.

Union leader Alex Caputo-Pearl doesn't go that far. But he does suggest Deasy's leadership style is ill-matched to the job and that, on merit, Deasy could be replaced for his handling of the iPad contract and a new student information system, called MISIS, that has malfunctioned.

For Caputo-Pearl and board members, personal and policy issues have combined to make Deasy's future in the district less tenable.

Deasy said he is trying to concentrate on what needs to get done in schools.

"I work every day for the benefit of youth and their parents. I don't try to measure if I'm appreciated," he said.