MORE THAN 100,000 LA SCHOOL REPAIRS BACKLOGGED: Fire safety at risk in some schools 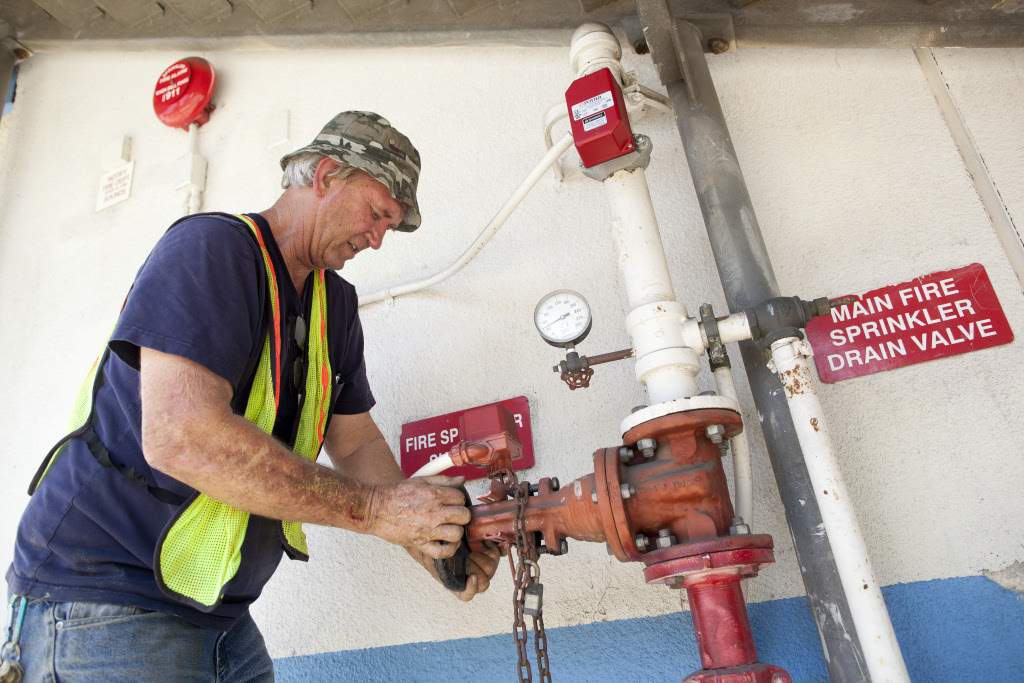 Dan Sapia shuts off water to the fire sprinklers at Hoover Street Elementary School in the Los Angeles Unified school district. His plumbing crew is often pulled from one emergency job, such as repairing this water main leak, to another, leaving little time for outstanding requests. Benjamin Brayfield/KPCC

September 18 2014 | This story has been updated.  ::  From burned out light bulbs and cracked concrete to compromised fire safety systems and exposed electrical wiring, Los Angeles Unified schools are waiting on 116,000 maintenance and safety problems reported since January, records show, and officials said they don't have the staff or money to fix them all.

An analysis of 165,400 repair requests filed with the school district this year showed less than a third have been addressed.

"We are very short staffed," said Roger Finstad, head of maintenance and operations at L.A. Unified. "We're operating at less than half the funding we had just about six years ago."

L.A. Unified set aside about $100 million for repairs this year, but Finstad said it would cost about $400 million every year to get all the work done.

The state used to require schools to reserve 3 percent of funds for upkeep. During the recession, that requirement was removed to give schools more flexibility. If the mandate was still in place, L.A. Unified would have to double funds for maintenance and repairs this year.

Superintendent John Deasy is proposing hiring another 900 maintenance workers next school year for a total of about $80 million.

"But even with that, it's still not going to be sufficient to do the full maintenance program our schools truly need," Finstad said.

"We have classrooms that are being flooded," Orozco said. "They aren’t ready for heavy rains when we do get them. Some classrooms have no air conditioning."

Of the outstanding requests district-wide, the data shows about 1,400 relate to school fire safety systems: leaking ceiling sprinklers, rust-covered fire sprinkler pipes and fire alarms and extinguishers are past due for repairs.

"What happens is the powder starts to cake in the bottom," Flores said. "The danger is if you go to use it, it won't work."

A year and a half ago, staff at Hamsaki Elementary school in East Los Angeles pleaded for upgrades to a 50-year-old fire sprinkler system, according to the most recent data provided by L.A. Unified in response to a public records request. An aging kitchen fire suppression system worried staff at Hope Street Elementary in Huntington Park. They put in a request in March. It still isn't done.

Seven months ago, San Pedro Elementary reported every fire extinguisher was out of date. Officials said they replaced them a month later.

At Cesar Chavez Learning Academies in San Fernando, which was built in 2011 with $147 million in bond funds, records show 205 repairs were requested since January, including five fire extinguishers housed in busted glass cases.

Student Oscar Ruiz said it's the little things that get him. The bathroom mirrors at Cesar Chavez  have been shattered as long as he's been going there. 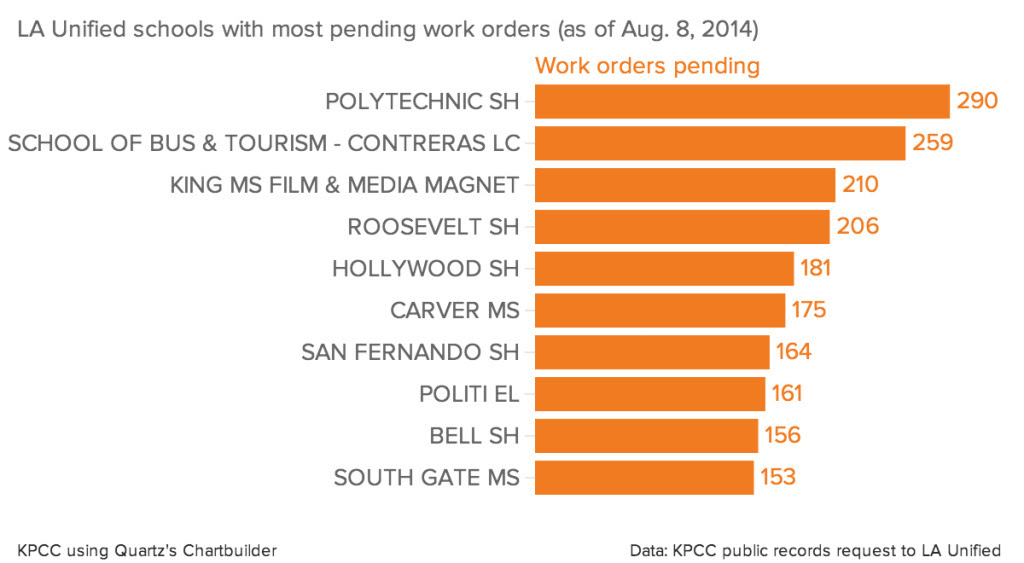 School officials said bond money can only be used for capital improvements – like replacing a roof – not routine repairs like fixing a leak. The school district's legal counsel decides which projects are eligible for bond funds and which isn't.

"You've got to draw a line between capital expenditures and regular expenditures and sometimes that's hard to do," said Stephen English, chair of the Citizens' Oversight Committee for L.A. Unified's bond program.

Because the administration doesn't believe bonds can be used for a wide range of repairs, those are not submitted for approval, according to English.

Even large repairs, such as new air-conditioning systems and roofs, are projected to run the district $13 billion over the next fifteen years, much more than what's left of the bond funds.

Over 90 percent of Measure R had been spent as of July, according to Tom Rubin, a consultant for the bond oversight committee. What is left is already committed to future projects.

Deasy plans to use $1.3 billion in bond funds to equip every student and teacher with a digital device loaded with learning software.

Because many of the voter referendums also promised to upgrade technology, the school district's legal counsel has determined that is a legitimate use of bond funds.

“The public isn’t going to vote for bonds any more because of this," said Carson, the co-founder of a Facebook group called Repairs Not iPads which posts pictures of broken water fountains and toilets and insect infestations. "Someone has to say 'no'!”

And then there are the ones no reports to officials downtown.

At Cesar Chavez, students said sewage smells seep up into classrooms near bathrooms at the 4-year-old school.

Sophomore Alexiz Acosta attends one of the four "learning campuses" at the school - which is following a newer model of breaking up behemoth high schools into manageable sub-schools.

Her building serves about 500 kids, but Acosta said only one of the bathrooms is usually open - and even then, it's not uncommon for toilets to be out of order. State law mandates schools provide at least one toilet for every thirty female students.

During a recent visit, more than one toilet was available - but water was running in only one of the three sinks.

Staff have been calling for plumbing repairs for at least three months, repair tickets show.

Cesar Chavez's principal declined to comment on why bathrooms stay locked or sinks were not working.

While state education officials and the Office of the State Architect have to sign off on new schools before they open to make sure they're safe and sturdy, they aren't involved in making sure they stay that way.

City and county fire departments are charged with conducting annual inspections of schools. Flores, the L.A. County fire inspector, said when county fire officials find violations, they give the school a written warning and can impose fines.

Officials at Los Angeles city and county fire departments said the number of warnings and fines issued to L.A. Unified campuses in the last year were not readily available.

Peter Sanders, a spokesman for the city fire department, said his inspectors can only enforce the fire code, leaving a number of L.A. Unified fire repairs outside their oversight.

"They may flag things on their own that may not be in violation of the fire code," Sanders said.

The only apparent oversight of conditions on campus comes from the California Occupational Safety and Health Administration.

Cal-OSHA received 49 complaints from L.A. Unified school staff over the past five years, records show, many after accidents.

The agency issued only one fine since January. Even with the threat of a $5,000 fee, it took Cabrillo Elementary School three months to come into compliance, Cal-OSHA records show.

Without more cash on hand, Finstad said it would be hard for his repair staff to abolish the backlog.

"I don't see it in the very near term," Finstad said.

It's criminal that funds that should have been used to repair schools have been used to purchase ipads. Having said that, if you're wondering why so many bathrooms are out of order, look no further than the students themselves. The mirrors are broken you say? They didn't break themselves. There seems to be deep need in some students to destroy plumbing or otherwise vandalize the restrooms. In our elementary school in Florida, we have students who will repeatedly urinate on the floor of the bathroom so much so that it will seep into the classroom next door. Or they'll urinate on the toilet paper. Hilarious. And so the bathrooms are closed for repairs. The many suffer at the whim of a few. Why didn't the principal have a comment on why his restrooms were closed? He didn't want to implicate his students.