Editorial By The Times Editorial Board | LA Times  | http://lat.ms/XvBERz 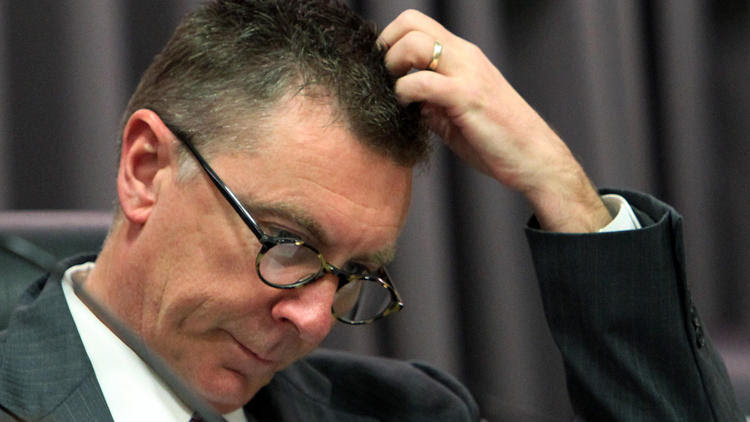 Superintendent John Deasy before the start of a public hearing at the headquarters of the Los Angeles Unified School District. (Reed Saxon / AP)

16 Sept 2014  ::  This would be a difficult period for Supt. John Deasy and the Los Angeles Unified School District even if he and the school board were intent on working together for the benefit of students. But these aren't the most cooperative of times, to put it mildly. The questions surrounding the superintendent's 2012 emails with Apple and Pearson, well before the companies were picked as the winners of the contract to provide thousands of iPads for the district's students, have further damaged the already tenuous relations between Deasy and the board. Nothing is likely to get better until the matter is resolved by further investigation.

After a period of relative peace between reform-oriented and union-allied political forces, things are now back to where they were last October. Board members are questioning Deasy about every step. Deasy is responding in an increasingly hostile way and talking once again about quitting. In a sign of the frayed relationship, he even made a formal request to obtain any emails between the board members — his bosses — and the two technology companies. It is unclear exactly what he is looking for, but it was a characteristically bold move for Deasy and illustrated his tendency to become pugilistic under pressure.

Meanwhile, the board seems unable to find its proper role, though in all fairness, previous boards didn't do much better. The job of the school board is to set far-reaching policy for the district, and its chief executive, the superintendent, is supposed to carry out that policy. The board absolutely should be asking piercing questions and providing strong guidance about big issues affecting large numbers of students and schools — such as the iPads, the annual budget or the inevitable difficulties involved in the sharing of campuses by district and charter schools. But it shouldn't niggle small items involving individual schools or deliberately advance a petty agenda against reasonable reforms.

Instead it has been doing both. Last week's board meeting was a prime example. A worthwhile proposal by two board members who often differ in educational philosophy, Tamar Galatzan and Monica Ratliff, was popular with all the board members. It would require charter schools to inform parents when a school is in danger of closing. But before it could pass, Bennett Kayser, the member most closely allied with the teachers union and thus the most hostile to charter schools, introduced what he called a “friendly” amendment. Hardly. It would impose a raft of small-minded requirements on charter schools, down to informing parents of the salaries of the janitors and the calorie content of the food served on campus. Kayser succeeded in having this meddlesome proposal added to the resolution, which will be considered at a future meeting. It's true that L.A. Unified posts calories on its website, but one of the points of creating charter schools was to free them from bureaucratic red tape, allowing them to concentrate on improving academic performance.

L.A. Unified's charter schools have, by and large, delivered on that. A Stanford University study published in March found that L.A.'s charters were routinely outperforming traditional public schools by big margins. The difference between the two types of schools, according to the Center for Research on Education Outcomes, was tantamount to “50 more days of learning in reading and an additional 79 days of learning in math.”

Things got worse when the board considered five small contracts — of about $40,000 to $50,000 each — for individual schools. The contracts were for such things as hiring outside help to get students ready for their college applications, and providing additional help for beginning readers. At that point, Ratliff said she wanted the district to create a list of vetted contractors for principals to choose from. And when Deasy asked how that squared with the district's commitment to giving individual schools more autonomy, she responded that she had rethought her commitment to autonomy, at least when it came to these particular contracts.

That led to a testy exchange between Ratliff and a visibly irritated Deasy, who interrupted her several times. Neither was fully in the right. Deasy tried to portray Ratliff's objections as an effort to keep students from being prepared for college or learning to read. That kind of attack was unfair. But Ratliff was out of line by suddenly calling for a change in well-established district policy.

The idea behind school autonomy was to give L.A. Unified schools more of the freedom that charter schools enjoy and, as with charter schools, to hold them responsible for their decisions by demanding improved academic outcomes. And whipsawing the district on this or almost any policy is one of the most disruptive things a board member could do. The autonomy rules should be given a few years to prove themselves and then be evaluated, rather than being subjected to potshots here and there from individual board members.

Compromise was within easy reach, yet neither side seemed interested in pursuing it. It's a helpful idea to create a list of approved vendors, with Yelp-type ratings from principals who have used their services. But the district shouldn't tie the hands of principals who find other vendors they like better. And the board, which barely peeped about the initial plan to spend $500 million on iPads for more than 600,000 students, is now wasting time debating $40,000 contracts for individual schools.

Yes, there are legitimate concerns about the Deasy emails, and that investigation should move forward. But in the meantime, the district has a job to do. It can't quibble its way to better education. And Deasy, even though he clearly feels under attack, can't threaten resignation every year. There's always hope that L.A. Unified leaders will set their political agendas aside in the cause of educational improvement, but it's a hope that is seldom realized.