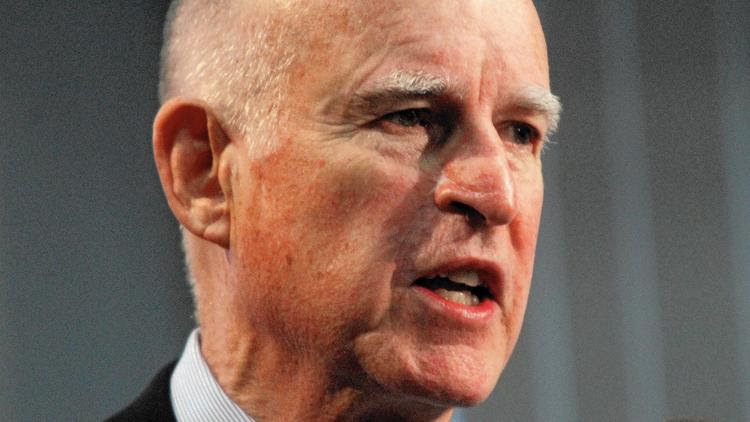 Gov. Jerry Brown took action on a wide range of proposals ahead of a midnight Tuesday deadline to sign or veto hundreds of measures still on his desk. (Bob Chamberlin / Los Angeles Times)

28 Sept 2014  ::  California Gov. Jerry Brown on Saturday signed legislation to provide $3 million in legal aid for the thousands of unaccompanied minors from Central America who have flooded into the U.S. illegally this year.

The Democratic governor also approved a new law to limit suspensions and expulsions of students who "willfully defy" teachers and administrators, and he vetoed $100 million that lawmakers had set aside for deferred maintenance at University of California and California State University campuses.

In addition, he OK'd the protection of G.I. Bill benefits for military veterans attending California colleges and changes in California's ballot initiative process.

The governor took action on the wide range of proposals ahead of a midnight Tuesday deadline to sign or veto hundreds of measures still on his desk.

The $3 million to help the immigrant children, said Sen. Ricardo Lara (D-Bell Gardens), will provide due process in the United States that will rescue some of them from the "virtual death sentence" they would face if deported to unsafe home countries.

"With the stroke of a pen, Governor Brown reaffirmed California's commitment to doing its part to address the unprecedented humanitarian crisis at [the] border involving Central American youth," Lara said in a statement.

The bill, SB 873, written by a budget committee, allocates money to nonprofit groups that will provide help to the children being held in California, who so far number about 4,000.

More than 60,000 unaccompanied children from poverty-stricken and violence-torn areas of El Salvador, Guatemala and Honduras have been detained so far this year by U.S. Border Patrol agents.

Californians were divided over the proposal, according to a recent USC Dornsife/Los Angeles Times poll. Nearly half of those polled call for the children to be immediately deported, with a similar number saying they should be allowed to stay in California as they await legal proceedings.

Brown also approved legislation that will limit the suspension of defiant students. Supporters of the measure said schools too often suspend or expel students for "willful defiance," which they criticized as a catch-all term that includes refusal to complete assignments or disruption of school activities.

"Kids who have been suspended or expelled are two times more likely to drop out and five times more likely to turn to crime," the bill's author, Assemblyman Roger Dickinson (D-Sacramento), said in a statement. "Rather than kicking students out of school, we need to keep young people in school on track to graduate and out of the criminal justice system."

The measure, AB 420, bans expulsions for such offenses in all grade levels and bars suspensions for students in kindergarten through third grade.

In another education-related move, Brown issued a line-item veto of a budget bill, stripping out $50 million that lawmakers had approved for each of the two public university systems for long-needed repairs.

In his veto message, the governor said this year's budget would have provided $200 million for deferred maintenance at the campuses and other state facilities if property tax revenue had exceeded expectations, which did not happen.

Brown said repairing aging infrastructure is a "major priority" for his administration. But he did not want to commit that much funding in a year when the state faces "unanticipated costs such as fighting the state's extreme wildfires."

Assembly Speaker Toni Atkins (D-San Diego) championed the funding increase and on Saturday vowed to address the issue next year.

The governor signed 21 bills to help and recognize military veterans and active-duty soldiers.

One guards the ability of 78,000 veterans to continue to enjoy benefits of the G.I. Bill while attending California universities and community colleges by requiring university and college officials to update in-state tuition policies.

The bill, AB 13 by Assemblywoman Connie Conway (R-Tulare), provides in-state tuition for veterans who were stationed in California immediately before being discharged.

Another allows the courts to create a diversion program for active military personnel or veterans who commit misdemeanors and are suffering from service-related trauma or drug abuse. The measure, SB 1227, is by Sen. Loni Hancock (D-Berkeley).

In addition, AB 1453 by Assemblywoman Sharon Quirk-Silva (D-Fullerton) was approved to create a new veterans' cemetery in Orange County.

It requires the state to work with local governments to design, develop, construct and equip a veterans' cemetery in the former Marine Corps Station El Toro in Irvine.

The state agency will apply for a grant from the U.S. Department of Veterans Affairs to pay for the creation of the cemetery.

"Local veterans, many of whom risked their lives on foreign soil, deserve an honorable place that will provide their families and communities a true and lasting opportunity to pay their respects," Quirk-Silva said.

Also on Saturday, Brown hailed a bill he approved that will increase public and legislative review of proposed state ballot initiatives.

"California's century-old initiative process is a hallmark of our electoral system, and today we're taking an important step to modernize and strengthen direct democracy," the governor said in a statement.

The bill institutes a new 30-day public review period at the start of the initiative process, during which time proponents could opt to amend their proposals. And state legislative committees will hold public hearings on the measure.

Backers may subsequently withdraw a proposal if they wish, even after completed petitions have been submitted. Under existing law, initiatives cannot be withdrawn after petitions are filed.

In addition, the state will have to post a list of the top 10 donors supporting and opposing an initiative. Currently, that information must be sought on a public database where campaigns file their fundraising reports.

In pushing the measure, Steinberg cited a survey last year by the Public Policy Institute of California that found 83% of voters feel the wording of initiatives is confusing, and 75% favor allowing more time for signature gathering.

But proponents would be under no obligation to heed recommendations from the public or the Legislature.