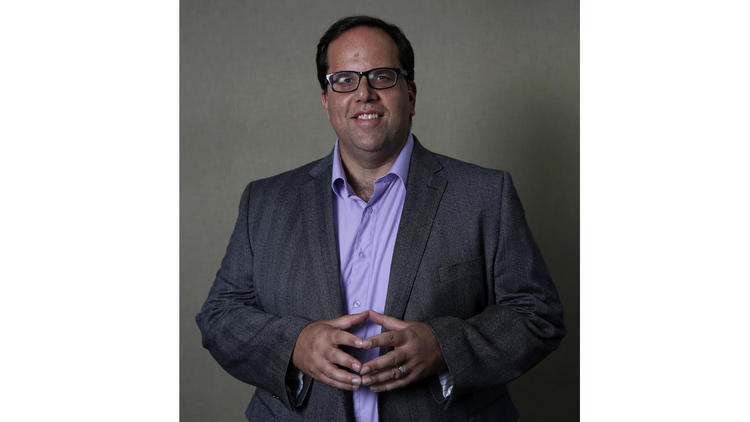 10 September 2014  ::  If kids aren't getting a good education, says UTLA head, it's not because teachers have job protection

It's a funny world, and a small one. Alex Caputo-Pearl, the new head of United Teachers Los Angeles, went to school in the same Maryland school district where John Deasy, superintendent of the Los Angeles Unified School District, was once superintendent. They missed each other there, but now they're in the same place, at the same time, on opposite sides of the table and sometimes on the issues. Caputo-Pearl, who was elected with 80% of the vote, was an ardent labor activist at Crenshaw High School, which he says got him ousted from the school after 13 years there. It was Deasy who decided the poorly performing school needed a clean sweep of faculty. Watch for big headlines as contract negotiations unfold.

How would you rate the superintendent?

Some things have been good, and frankly he's been pushed by some good community organizing around this equity index to target additional funding to high-need schools. To push down the number of suspensions and expulsions, we agree. For it to be more than a paper promise, you have to put additional staffing to get students the help they need.

On the pay issue, in Los Angeles, where you're dealing with some challenging work environments, you want to be more than competitive. Right now LAUSD is toward the bottom when you look at other districts in and around L.A. County. Proposition 30, which teachers had a huge part in helping to pass, helped LAUSD get the biggest year-to-year funding increase in 15 years. Offering teachers a 2% raise after they've taken 8% cuts — people see it as a slap in the face.

The district's new computer system for tracking students had a wobbly start.

I don't think you can imagine the impact unless you've seen it: students without classes because they're not in the system, counselors spending the night at schools trying to get schedules together because the system keeps breaking down, students freaking out because they're preparing college applications and the system has jammed up transcript services. For a superintendent who claims to be on the crest of the national wave around college access, it's distressing.

Does the district's sheer size defeat these efforts?

No, it's an autocratic style that defeats these efforts. The committee Deasy convened, including some of his top people, recommended the system not be rolled out this year. The feedback was slow it down, and his own autocratic style said "Go ahead," and he did, and walked right into another blunder. 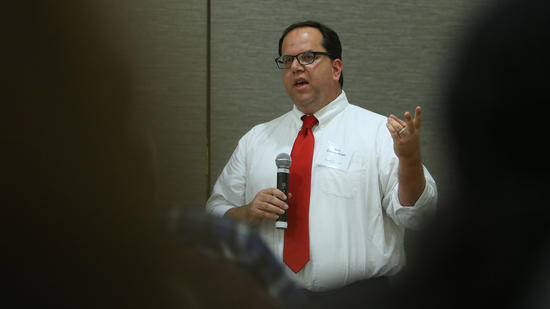 Teacher Alex Caputo-Pearl will bring his community organizing and activism to his dealings with the LA Unified School District.

The governor's been pretty good on education. Our concern with Vergara is the money and agenda behind it. It's not some big effort to help schools and the most needy kids; it's a well-funded agenda to target public institutions and teachers unions.

For those trying to create a run-everything-as-a-business model, teachers unions, [among] the last unions with really nationwide political influence, are looked at as pushing back against that market-oriented mentality. I taught in South L.A. for 22 years. The kids I taught, they didn't receive a subpar education because one of their teachers had a right to a hearing. If they received a subpar education, it was because they had enormous class sizes, not enough technology in the classroom, teachers who felt de-professionalized. With Vergara, people who are whistle-blowers and advocates — they're going to shut up.

A recent Field Poll found about two-thirds of Californians agree with the ruling.

Two things about that poll — you've had a tremendous amount of money poured into shaping public opinion about the bad teacher narrative: If you just get rid of bad teachers, public education would be great.

The flip side — teachers haven't done a good enough job talking to parents and the community about those issues. You hear sensational stories about teachers who have made very bad decisions or done horrible things; we don't put out the other side, about teachers who are doing innovative curriculum, taking part in organizations to help the community. So poll results like that don't surprise me.

We don't defend bad teachers. We defend due process. If I hadn't had any rights [when Crenshaw faculty was replaced], I could have been fired on the spot. Deasy has a variety of methods to create a climate of fear. It's part of his run-schools-like-a-business approach. One way you instill fear is to reconstitute schools. You just say, "Everybody's going to have to reapply for their jobs." Research says that doesn't work for kids.

"Teacher jail" is another such method. A disproportionate number of teachers in teacher jail are UTLA chapter chairs or whistle-blowers. At any time an allegation may be made against you and your name will be dragged through the mud. A third way is a teacher evaluation system that wasn't negotiated — you do it unilaterally, and that's what they did with this new system, TGDC, Teacher Growth and Development Cycle. It's not the way to improve things.

How much of members' dues goes to UTLA's political activities?

We have a separate way of raising money for electoral campaigns. Teachers have to sign up; it's not automatic. That goes specifically for school board campaigns, things like that. Of course we want to know whether candidates support our "Schools L.A. Students Deserve" initiative, but financially it's separate.

You've opposed high school exit exams, and once referred to a "racist diploma penalty" attached to them.

I still don't think students who go to an under-resourced school should have a high-stakes penalty attached to that. Have exit exam passing rates increased over the years? Yes, but that's not surprising. Unfortunately, it acculturates the system to teach to the test, so it doesn't necessarily indicate some incredible new quality in the school system.

The overemphasis on testing is bigger than the high school exit exam. You see this with the iPad fiasco; a primary function of them was to get kids ready to take a test on an iPad. It wasn't about enhancing learning and doing cool projects. There's some useful things about Common Core; however, if you boil it down to a test, it's going to reinforce narrowing the curriculum.

But in the work world, graduates will have to pass the equivalent of tests all the time.

I'm not against testing; I have created lots of tests in my years of teaching. Are students getting big concepts as well as discrete skills? The best tests are primarily diagnostic and not proof of some cumulative understanding.

Do charter schools have anything to offer?

When the charter movement began, [it was] people who came out of the civil rights movement who saw that certain student populations were not being served and wanted to figure out a different approach, to cycle that learning back into the public system. I think that was very noble.

It has turned into trying to set up an alternative to the public system that is essentially a race to the bottom around student access (a lot of charters don't allow special-education or English-language learners), around teachers' rights, around parent and community say-so. The ascendant forces in California's charter movement, I don't see a lot of value in them.

We are organizing charter teachers into UTLA. We look at teachers, we don't look at who they work for.

We keep hearing that California public education was terrific in the 1950s, '60s, '70s. Was it, and if so, what changed?

There were segregated schools, so for the white and more middle-class populations, I think there was a pretty high quality. Many [other] schools were neglected. That said, Proposition 13 had a huge impact in taking California down, in per-pupil funding. That's criminal that that's where we are. UTLA is working on an initiative for 2016 toward "split roll" property tax [separating commercial assessment rules from homeowner ones]. Not hitting the working or middle class but going after commercial real estate owners who've gotten away with this.

You joined Teach for America in its first year. What do you think of it now?

It was literally a fly-by-night operation in 1990. However, disorganized as it was, it was addressing a real teacher shortage. Now it's a huge corporate giant that is damaging public education. There's still great people who come through, but TFA [also] attracts folks who [want to] shape education policy by becoming charter school managers or politicians. It's giving them a badge of honor. Yet because of their tenure in a classroom — around two years, which isn't enough to really understand how things work and how to improve schools — they end up being proponents of quick-fix solutions. They become proponents of oh, just shut the school and open a charter, or evaluate everybody based on student test scores. A quick-fix mentality.

You advocate connecting education and the union to broader community activism.

At Crenshaw, we broke into small learning academies: law and social justice and business. We were taking what students were learning across disciplines to create study that was relevant to kids' lives but also with deep academic content. Our English students read a book by teenagers in the Chicago projects, about urban living, to compare their own experiences. I had them read policy documents Democrats and Republicans wrote about revitalizing our inner cities. In math they used geometry and algebra to map out where liquor stores and parks were. We hooked up students with paid internships to do surveys of access to fresh fruit in South L.A. compared to West L.A. We had kids doing small business development projects.

Part of social movement unionism is being willing to throw down and fight. It's not in our contract how many parks are around our schools, but if there's a campaign around it, we want to get involved, because young people need recreational space. Education is affected by what's going on in communities.

This interview has been edited and condensed.