Opinion in the LA Times by Editorial Board member Karin Klein | http://lat.ms/1yy22uS 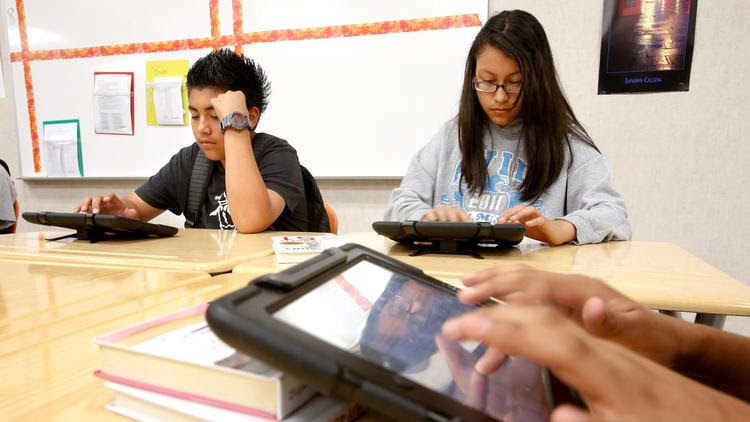 According to the bond oversight committee of Los Angeles Unified and an article by The Times, LAUSD is asking for more money than it needs for computer devices for students. (Los Angeles Times)

Sept. 29, 2014  12:35pm  ::  It’s no surprise that the annual standardized tests for students have had some troubling effects on schools as well as positive ones. Too much teaching to the test, too much time devoted to review for the test instead of teaching new material, school years started earlier so more learning can take place before the tests. On top of that, the new Common Core tests require major outlays of cash for computers that students need to take the exams.

Now, according to the bond oversight committee of the Los Angeles Unified School District and an article by Times education writer Howard Blume, L.A. Unified is asking for more money than it needs for computer devices for students because it wants to test all students during the first two hours of the day, when they’re fresher and thus likely to do better.

If that’s true, we have indeed reached the point of letting tests twist basic school operations out of joint and beyond reason.

lROf course L.A. Unified wants to do what it can to improve scores, and I’m willing to bet it’s not the only district that uses morning testing as one tactic. Much rides on the results — arguably, too much. But the tests should come down to what students have learned, not what hour of day they were taken. School officials also said more devices were needed for education and that they were used both morning and afternoon at many schools. They might be entirely correct. But they brought no evidence to bolster their contention, and the oversight committee made clear that it wasn't giving a green light to a  multimillion-dollar expenditure based on officials' say-so.

It was about time someone did this kind of digging before releasing such large sums of money.

The committee didn’t outright reject the idea that there might be valid reasons for the request. It just said the district had to show the need and that morning testing for all was not a need unto itself.

“I think we have a better use of [millions of dollars] than to juice student test scores,” committee chairman Stephen English said, according to a report by KPCC.

Well said. There have been constant complaints from parents about renovation work that has not been undertaken at dilapidated schools. During the recent searing weather, air conditioning units at many schools showed that they weren’t remotely up to the task of keeping the students from wilting. Talk about lost educational time. There are a lot of needs clamoring for a share of bond money, and it’s the district’s job to persuade the bond committee that one or another should take top priority.

The committee raised another thorny issue: The district still lacks an inventory of its existing devices. In August, The Times published a story about an audit by the district’s inspector general that said at least $2 million in computing devices had gone missing. Relatively few of these were iPads from the district’s controversial technology push, but the findings still are enough to make the public nervous about whether the district will guard tax money wisely.

Arguably more important than the number or worth of the missing devices was the internal report’s finding that it was impossible to actually determine a number because the inspector general couldn’t find out how many computers and other devices had been purchased. “The information needed was incomplete, inaccurate, or unavailable,” the report said.

According to The Times’ August story:

“The audit found campuses that had a surplus of devices and schools with no effective system to track who had a computer or who was responsible for it.

“…And 106 computers from a closed occupational center could not be located, the report said.”

Computers also disappeared from a regional office. One school refused to take any responsibility for the devices. When records existed, they were often inaccurate.

You’d think there would be some major blushing going on and a scramble to inventory what was around before asking for anything new. But that’s not the way it happened.

Instead, the district asked for $42 million more, including money for new laptops for all secondary teachers. But again, the committee pointed out that the district didn’t seem to have a handle on how many teachers need laptops and how many had perfectly fine ones already.

The decision is only advisory, which means the school board can override it. But considering the uproar over the technology project and over recently released emails that show close communication among Superintendent John Deasy, his former top deputy and eventual contract winners Apple and Pearson, the board should require a lot of good answers before it considers making such a move. Answers to the kinds of questions the oversight committee has proven it knows how to ask.