GINNY MANCINI GIVES BACK TO THE MUSIC THAT NURTURED HER

Ginny Mancini gets lots of solicitations delivered to her Westwood home, thanks to her many decades of philanthropy. But regrettably, she said, she can't answer every plea for help. She's 90 years old, after all, and everyone has to slow down at some point.

Several years ago, though, the former singer and widow of the late composer Henry Mancini received a letter that commanded her attention. It was from a Boyle Heights nonprofit she'd never heard of.

"It said, 'Neighborhood Music School,' and I saw the image of what the school looked like," Ginny said.

What it looked like, she said, was the kind of school she wished she could have escaped to as a child. A homey-looking place set up for exactly the kind of kid she'd been, struggling but talented. 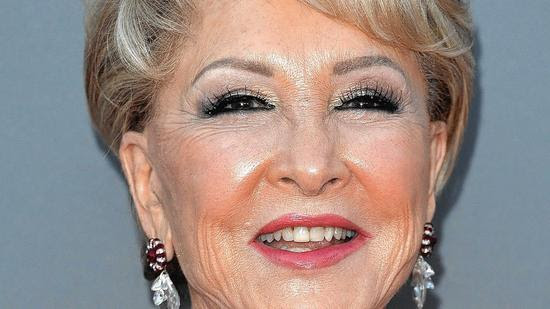 Ginny Mancini, widow of composer Henry Mancini, felt the warmth of Neighborhood Music School in Boyle Heights and was reminded of how much she would've appreciated a place like that when she was a child. (Alberto E. Rodriguez, Getty Images)>>

The childhood she described was not always a happy one. Her father was from Ireland and her mother from Mexico, and they met picking cherries on Lankershim and Ventura in the Valley. Their marriage didn't last, though, so Virginia "Ginny" O'Connor was raised speaking Spanish, nurtured by a loving grandmother and great-grandmother who came from what she calls "a long line of strong Mexican women."

Her family was always on the move, Ginny told me, beginning at 107th and Vermont. Ginny helped out wherever they landed, working at an ice cream cone factory in Boyle Heights, a drycleaners in Hollywood and a sheet metal factory in San Pedro. But always there was music.

"The first piece I learned to play on the piano was the Mexican revolutionary song, 'Zacatecas,'" said Ginny, who found peace and inspiration in music, and eventually a career, as well.

She sang at El Monte High School and L.A. City College and was so good that Mel Torme made her one of the Mel-Tones. And then she moved on to the Tex Beneke orchestra, which featured a young pianist named Henry, who was just back from the war and playing hard to get with Ginny, until finally coming to his senses.

It was in honor of what music did for her that Ginny wrote the first of several checks to the Neighborhood Music School. Then she got a phone call: The school was about to celebrate its 100th anniversary of providing top-quality, low-cost music education to students who might not otherwise have access to it, and the school's staff wanted to make Ginny their centennial celebration honoree.

I saw it as a chance to get up on my soapbox and cry out for arts education for children, and in particular, for music education. - Ginny Mancini, widow of Henry Mancini

Ginny decided to check out the school but did not commit to being an honoree, which of course means calling all your friends and asking them to put on their fancy clothes and bring their checkbooks and take on another cause.

But the visit to the school, with its largely Latino student body, was persuasive.

"The minute I walked up and saw the sign and felt the warmth of such an inviting space, I just said, 'This is wonderful,' " she said. "I was able to relate it to my childhood and how much I would have appreciated that school. It really resonated for me."

Before and after her husband's death 20 years ago, Ginny has also given back through the Mancini Institute, a training ground for aspiring musicians, as well as through her membership on the L.A. Philharmonic board and countless other charitable and nonprofit organizations

If she was going to bang the kettle drums for one more cause, she decided, she wanted it to be the Neighborhood Music School.

"I saw it as a chance to get up on my soapbox and cry out for arts education for children, and in particular, for music education," said Ginny, who has been disheartened by the trimming of arts budgets in public schools across the land.

Music, she said, teaches us how to deal with frustration, how to solve problems, how to resolve conflict.

"I'll do anything I can do," Ginny said, "to get the word out about how important a child's creativity is and how it must be nourished."

For years, that meant supporting Mr. Holland's Opus Foundation, which donates instruments to schools all over the U.S. And Ginny has something of a connection there. Her daughter, Felice Mancini, is the executive director at the foundation, and formerly ran a music camp at Mount St. Mary's College, where her famous father used to love working with the youth orchestra.

"She's not taking it with her," Felice said of her mother. "She has this in her blood, that she wants to give back to causes she believes in."

That was the case Saturday night at the downtown gala for the Neighborhood Music School. Ginny Mancini's grace and good will dazzled an audience that included her famous friends John Williams, Norman Lear and Dave Koz. And she drew cheers for a speech that she sang, in which the refrain was not about the last 100 years but the next.

Music is something that every child needs, nourishment just to be sure he succeeds, music is magic wherever it leads, a hundred years from today.

The program included violinist Mickey Fruchter, who's been at the school 50 years, teaching for love rather than money. Fruchter played with a former student, Bernard Leon, who began taking lessons from Fruchter at age 4 and went on to become the school's office manager.

For Ginny, one of the highlights came when students took the stage on what was the 67th anniversary of her marriage to Henry, and played his song from the movie "The Molly Maguires."

"It was such a lovely theme, and they nailed it," she said.

So did Ginny Mancini.

Yesterday, Rory Pullens, the newly minted Executive Director of LAUSD’s Arts and Music Education Branch, addressed the Committee of the Whole of the Board of Education – describing his vision of-and-for the future of Arts Ed in the District. He described the role of community partners like the Community Music School – which stands across the street from Ramona Opportunity High School – an LAUSD  school for young women which serves dropouts, stragglers and struggling teenage moms and their children.