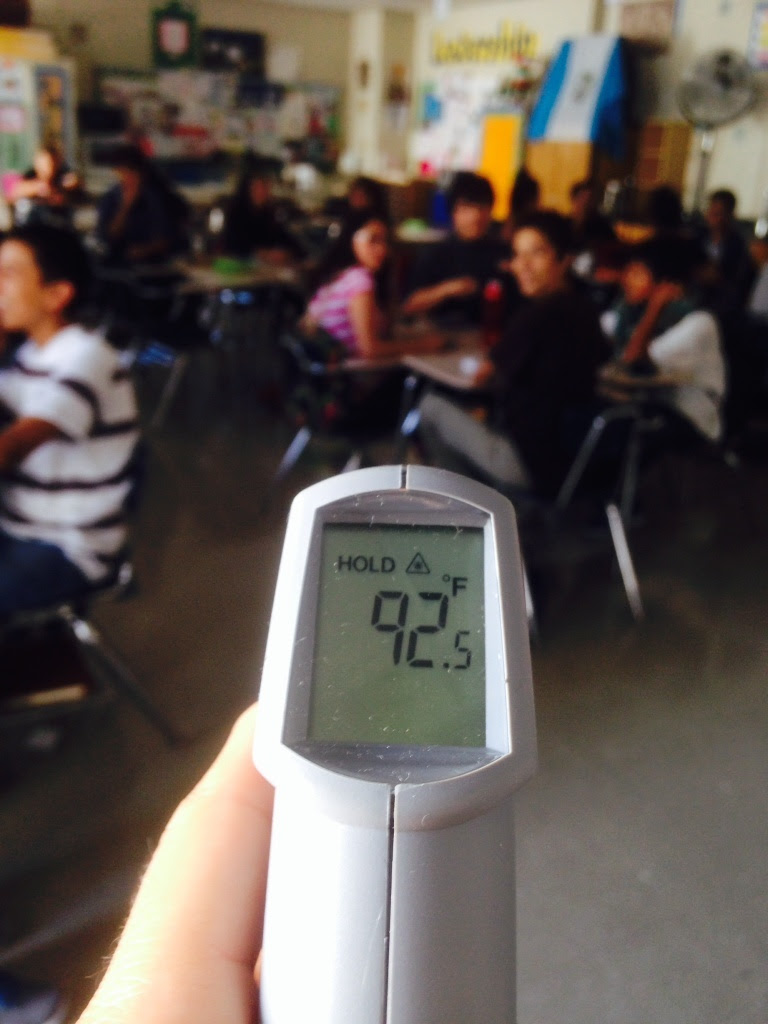 September 15, 06:42 PM  ::  L.A. Unified says it has air conditioning in all 32,000 school district classrooms, but 2,000 pending service calls have turned the current heat wave into a repair crisis.

On Monday, at Franklin High School in Highland Park, the conditions were sweltering.

"I have a temperature gun and the highest temperature inside the classroom was 92 degrees,” Spanish teacher Karla Johnson said.

That’s too hot for her students to learn.

“They are having problems concentrating, they’re falling asleep, they’re sweating. I can see sweat dripping down their face while I’m trying to teach them,” Johnson said, adding the air-conditioning problems aren’t new. She's been complaining about the situation for 10 years.

What's it going to take to lower classroom temperatures to a level where learning can go on?

"It's going to take the students to speak up," Johnson said. She's heard some students talk about a walkout on Tuesday to protest the school's broken air conditioning.

“That surprises me that any room gets to 92 degrees,” said Robert Laughton, L.A. Unified’s deputy director of maintenance and operations.

His office put Franklin High ahead of the line to get a technician on campus by Tuesday morning, he said.

The triple-digit heat wave has turned the air-conditioning repair backlog at L.A. Unified into a “crisis,” Laughton said. All of the district’s 77 air-conditioning repair technicians have been placed on mandatory overtime. Some of them will be working seven days a week to bring the classroom temperatures down to a level at which students can learn.

Laughton said he couldn't estimate how long it will take to resolve the backlog.

The best teachers and students can do is hope for a break in the heat, which may not come until Wednesday.