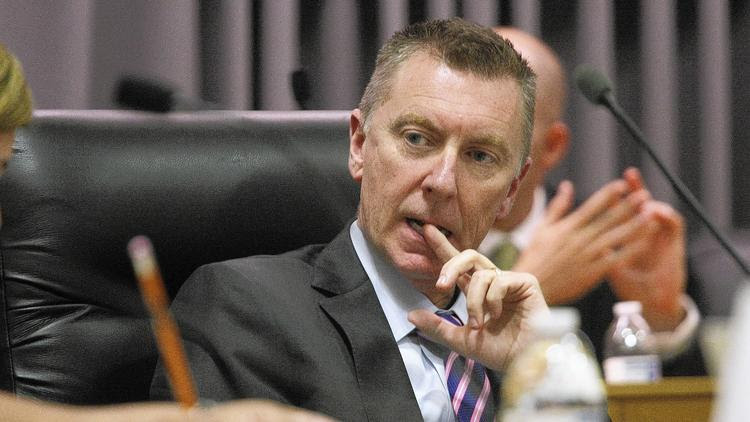 12 Sept 2014  ::  LAUSD Supt. Deasy is requesting records of contacts between board members and tech firms

In a bold challenge to his bosses, L.A. Unified Supt. John Deasy has filed a public records request seeking emails and other documents involving school board members and nearly two dozen companies including those at the center of the controversial iPad project.

The move opens a new front in the fallout over a contract between the L.A. Unified School District and Apple. Until now, the focus has been on communications that Deasy and his top deputy had with the computer giant, which supplied the iPads, and with Pearson, the curriculum company that provided the instructional software on the devices.

The contract was the major piece in a $1.3-billion effort to provide a computer to every student, teacher and campus administrator in the nation's second-largest school system. Deasy recently suspended future purchases under that contract. He has denied any improprieties in connection with it.

The district's inspector general has begun reviewing communications among the two companies, Deasy, and then-Deputy Supt. Jaime Aquino, who left the district at the end of 2013. Aquino also has defended his actions.

Deasy, through his Century City lawyer, Harvey I. Saferstein, apparently is attempting to unearth any possible ties between board members and technology companies.

At one level, Deasy's focus on the Board of Education does not seem surprising, said Dan Schnur, director of the Jesse M. Unruh Institute of Politics at USC.

"It's not as if they were going on long camping trips together before this happened," he said, referring to tensions between Deasy and some board members. "Deasy obviously feels he's been unfairly attacked for communications he believes are completely appropriate. This looks like his effort to find out if the pots are calling the kettle black."

The Deasy and Aquino emails contain detailed instructions about a possible contract between Pearson and L.A. Unified. Deasy has described it as a potential pilot program that never occurred. The exchanges discussed training 2,000 teachers who, in turn, would coach their colleagues across the sprawling school system. Other correspondence alluded to a possible partnership with Apple to provide devices. In one email, Aquino noted the need to ensure that Pearson is the low bidder.

Aquino has said he was merely reminding Pearson about the rules for winning contracts.

Deasy obviously feels he's been unfairly attacked.... This looks like his effort to find out if the pots are calling the kettle black. - Dan Schnur, director of the Jesse M. Unruh Institute of Politics at USC

The district eventually conducted a formal bidding process that resulted in the selection of the Apple/Pearson team. Deasy recused himself because he owned Apple stock. Aquino supervised the bidding, but said he did not intervene in evaluating the proposals.

Deasy has said that contacts with vendors are routine, even when they occur before the start of bidding. He also has said that the elected school board members meet with companies and accept campaign donations from them even though they later must vote on contracts involving those firms.

Deasy declined to comment about the records request. Saferstein could not be reached.

The Public Records Act request, dated Sept. 10, targets board members George McKenna, Monica Garcia, Tamar Galatzan, Steve Zimmer and Bennett Kayser. It seeks "all meeting notes and correspondence (including emails and letters)" from Jan. 1, 2012, through Sept. 1, 2014, involving board members and their staff in connection to a list of 18 technology companies and two individuals.

All of these companies sell computers or materials, such as curriculum or software, to school districts.

The request also includes Meg Whitman, the HP chief executive who ran unsuccessfully for California governor, and Joel Klein, the former chancellor of the New York City school system; he left that job to head Amplify, a subsidiary of News Corp.

An earlier request, on Aug. 28, from Saferstein sought the same records from board President Richard Vladovic and board member Monica Ratliff.

Ratliff headed a panel that examined the district's technology program. Last month, she released a critical report on those efforts. She faulted senior officials for creating the appearance of favored treatment for the winning vendors.

When asked about the records request, Vladovic responded: "It doesn't bother me. I'm very transparent."

Vladovic was reluctant to comment on whether Deasy's action indicated a deteriorating relationship with some members of the Board of Education, which supervises the superintendent.

"I don't believe so," Vladovic said. "I'm not going to speculate on that."

Zimmer said he had "no way of knowing what is motivating this request."

"It is certainly within his right if he feels he has to do this in the interest of full and fair public scrutiny," Zimmer said. "It doesn't feel good, but I understand."

He added: "I'm going to work with the superintendent as I did before."

The requested emails cover a period dating back more than two years. Under current district policy, many of those emails might have been automatically destroyed after one year. Emails haven't been routinely deleted because of technical and staff limitations.

Ratliff said earlier this week she would ask the board to change the policy to preserve documents for longer periods.

Board member Garcia, a Deasy ally, declined to comment about the records request. Ratliff, Galatzan and McKenna could not be reached Thursday.