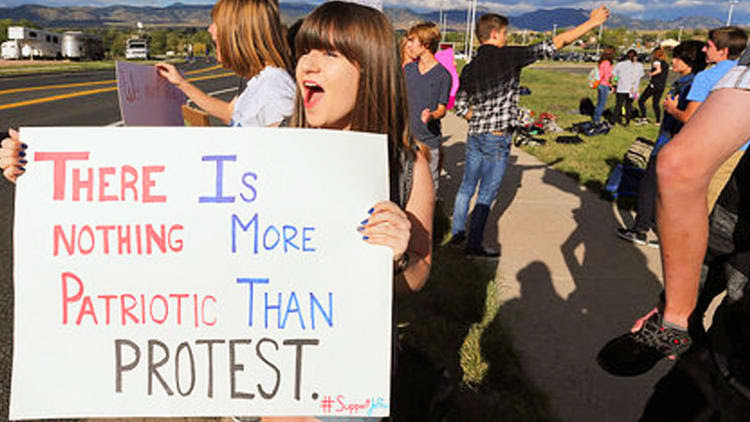 Students from schools in the Denver suburbs are protesting a proposal by the Jefferson County school board to emphasize patriotism and downplay civil unrest in the teaching of U.S. history. (Brennan Linsley / Associated Press)

9/24/2014 | Reporting from Littleton, Colo.  ::  For the third straight day Wednesday hundreds of high school students walked out of their classrooms in suburban Denver in an act of civil disobedience to protest proposed curriculum changes that would curtail lessons about civil disobedience and other topics such as civil disorder. 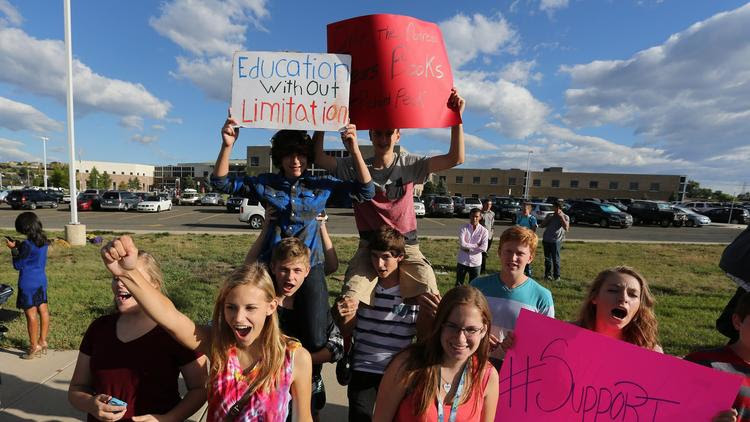 The Jefferson County school district west of Denver has been embroiled in controversy for months following the election last year of a slate of conservative school board members who ran on the promise to overhaul teacher pay, emphasize charter schools and closely examine curriculum. Dustin Zvonek, the Colorado state director of Americans for Prosperity, a conservative group affiliated with the Koch brothers, has praised the new board members for their agenda.

But the protests were ignited by the recent suggestion by Julie Williams, one of the newly elected board members, that the teaching of advanced placement U.S. history in the district’s 17 high schools should be scrutinized to promote more “positive aspects” about the country and less discussion on “civil disorder, social strife or disregard of the law.”

The proposal called for instruction in which “theories should be distinguished from fact. Materials should promote citizenship, patriotism, essentials and benefits of the free-enterprise system, respect for authority and respect for individual rights. Materials should not encourage or condone civil disorder, social strife or disregard for the law,” according to a district report.

Even though the board tabled the curriculum proposal until an indefinite date, the uproar shows no sign of slowing.

Since Monday, when 100 students walked out at Evergreen High School, the protests have continued to gather steam, fueled by social media. By Wednesday, there had been student walkouts at nine high schools with more planned for the rest of the week.

Katharine Turner, a 17-year-old senior at Chatfield High School, was one of hundreds who left classes to march down a busy street, many chanting the emerging slogan, “Don’t Make History a Mystery.”

“I want to someday teach history,” Katharine said Wednesday morning. “I believe students need to learn the facts — all of them.”

Ashlyn Maher, 16, another Chatfield senior, agreed. “Some of the greatest things in history happened because of civil disorder and protest.”

The newly named superintendent, Dan McMinimee, attempted to calm the situation in a statement to parents, pledging to meet with student groups about the curriculum proposal. “Our students deserve to be heard and need to know that they can have a role in shaping their education.”

McMinimee’s hiring this year sparked its own controversy as he was the only finalist for the job and is considered by many to be hand-picked by the slate of conservative board members. McMinimee replaced longtime Supt. Cindy Stevenson, who left abruptly when she said the board refused to work with her.

Williams’ proposal for a curriculum committee to review the history lesson plans included provisions that the panel would provide ongoing monitoring of teaching materials and that the board could review and add topics when they saw fit.

Williams said she was shocked by the outcry. “To be accused of censorship? Seriously? That is just ridiculous,” she said in a statement.

The advanced placement U.S. history class is an accelerated course given to high school students who are eligible to earn college credit by passing the standardized test. The test was revised this year to emphasize careful reading and understanding of historical documents, according to the College Board, which administers the test nationwide. School curriculum needs to reflect the changes if students are to pass the test.

Williams called the revised test and accompanying materials introduced nationwide this fall “untested and unresearched.” She believes the course “rejects the history that has been taught in the country for generations.”

“It has an emphasis on race, gender, class, ethnicity, grievance and American-bashing while simultaneously omitting the most basic structural and philosophical elements considered essential to the understanding of American history for generations,” she said.

John Ford, president of the Jefferson County teachers union and a social studies teacher at Moore Middle School, is appalled by the suggestion. “The AP program is a nationally recognized program that was created by college professors and experts in their field.”

The College Board defended the changes in the test.

“At the root of current objections to this highly regarded process is a blatant disregard for the facts,” the College Board said in a statement. “Despite the principled engagement and unwavering cooperation of the College Board in addressing concerns, the most vocal critics have prioritized their own agenda above the best interests of teachers, students and their families.”