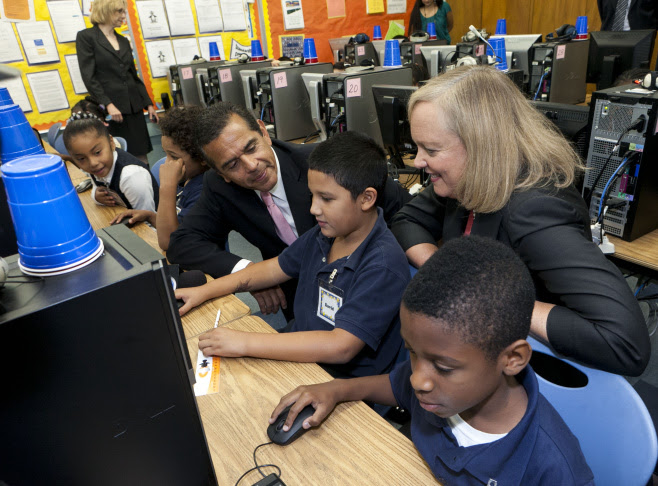 March 19th, 2013, 6:00am  ::  As Los Angeles Mayor Antonio Villaraigosa prepares to step down in June, among the achievements he takes credit for during his eight years in office is improving one institution that the law gives him no authority over: the public schools.

Yet if any one policy area shows where his ambition outstripped his performance, it would be in his oversight of the city's troubled schools.

Villaraigosa campaigned, in part, on the idea that power over the city’s schools should shift to his office.


“I’ve said that I believe that the next mayor should be involved with the schools,” Villaraigosa said during a mayoral candidate forum in 2005. “And I even see a role similar to (Michael) Bloomberg in New York and (Richard) Daley in Chicago, where the mayor has oversight over the schools.”

But the Los Angeles Unified School District Board of Education rebuffed him.

Villaraigosa, who had been a popular speaker of the California Assembly in the late 1990s, didn't give up. He rallied his allies in the state legislature, who passed a bill giving L.A.’s mayor significant authority over the L.A. Unified School District.
He celebrated his victory with supporters at a South L.A. charter school after then Gov. Arnold Schwarzenegger signed the bill.

“Ladies and gentlemen, I cannot possibly convey the sense of hope that I’m feeling for our city’s future right now,” he told a group of students, parents, and charter school leaders.

The party was over within a few months, when the school board – led by then-president Marlene Canter – won a lawsuit blocking the new law.

“The court didn’t just say no. They shouted no and said that the law is unambiguous,” said Pomona College Professor David Menefee Libbey. “In the state of California, there is this deep separation between city politics and school district politics. The voters have put it there, and the state legislature may not eliminate that separation.”

He aggressively raised money and campaigned to elect members aligned with his education policies. Monica Garcia, Tamar Galatzan, Yolie Flores Aguilar, and Richard Vladovic won seats on the school board in 2006 and 2007 with Villaraigosa's help.

With friends in place on the board, he came up with another proposal: He would take over some of the city's worst performing schools and turn them around. Villaraigosa created a non-profit, the Partnership for Los Angeles Schools and funded it with a $50 million commitment from real estate developers Richard and Melanie Lundquist.

The Santee Learning Complex, a high school just south of downtown L.A., is one of 16 Partnership schools. The campus had the dismally low Academic Performance Index score of 502 in 2008, before it was taken over. A perfect score is 1,000.

“We’re still under Los Angeles Unified School District, but as a Partnership school we receive additional support,” Vice Principal Marissa Martinez said as she showed off improvements during a recent tour.

On campus once a week

What she means by support is that Partnership administrators are on campus at least once a week to go over statistics with the staff, talk about challenges and to help find solutions. Martinez in turn visits at least one classroom every day to make sure that teachers are being effective.

He said Villaraigosa’s education legacy is a story about a mayor who wanted to duplicate reforms in New York and Chicago, “who in doing that found that he had real limitations because of the political dynamics of Los Angeles and so took on a smaller chunk,” he said. “And (he) found that even in taking on this smaller issue he wasn’t able to fully realize the goals he had."

A lesson for L.A.’s next mayor, Rogers said, is not to try to run schools, but to instead use the mayor’s office as a bully pulpit to rally support for schools.

L.A. Unified school board president Monica Garcia, who just won a third term with Villaraigosa’s political help, disagrees. She said the mayor should be judged on how hard he fought.

“His legacy, when it comes to schools: he fought for kids just like him," she said. "He challenged his friends in the teachers union, in the state legislature, and down the road from him.”

Villaraigosa considers his involvement with the schools a success and is proud that he "set a high goal." In an interview with KPCC's Pat Morrison, he took credit for a district-wide improvement in test scores, even though he has no role in the vast majority of the district's 900 schools.

His office has issued a two two-page list of education accomplishments, some of which date back a decade before he was elected, such as voter-approved school construction bonds.

There is one effect of his involvement with L.A. unified that no one can debate: He has pushed spending on school board races into the stratosphere. His Coalition for School Reform raised more than $3 million to support three charter-friendly candidates in this year's race – securing big dollar, big name donations from all over the country. And that's a role he said he's not giving up.

"I’ve committed to LA’s advocates for education reform that I will continue to be involved in these school board elections," he said.

So far, the coalition is 1-1, helping board president Monica Garcia to gain re-election, but failing to unseat incumbent Steve Zimmer in March. The group said it plans to spend another $400,000 supporting Antonio Sanchez, who will face teacher Monica Ratliff in a runoff in May.