As they wait to see whether the cuts are allowed to go forward, educators worry that the ultimate effects could trickle down generations. 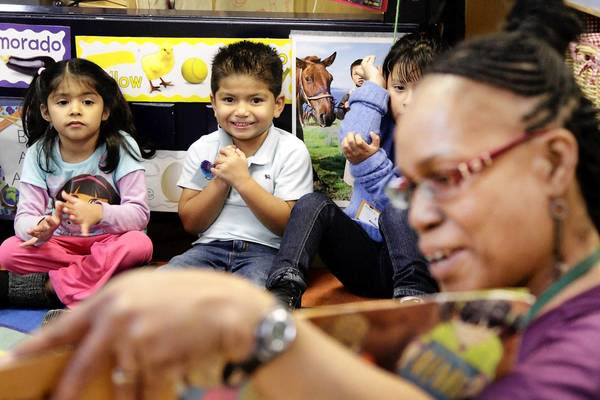 March 10, 2013, 7:02 p.m.   ::  To the preschoolers at the Good Beginnings Child Care Center, the giant crayons and blunt scissors were utensils to help them make paper crowns.

But to the instructors of the Pico Union center, the tools were helping the 3- and 4-year-olds develop fine motor skills and object recognition.

The center is one of hundreds in Los Angeles County funded in large part by Head Start, a federal program that provides early childhood education, nutrition and health services to low-income families.

Wendy Vasquez relies on the center to care for her 4-year-old daughter, Juliet, while she attends class at a nearby technical college.

"As a parent I try to set a good example, and having her here provides the safety and stability that I would give while allowing me to go to school," Vasquez said.

But although the program is thriving, it could be hurt by federal budget cuts. Earlier this month, Congress failed to avoid across-the-board reductions, known as the sequester cuts, and programs such as Good Beginnings are nervously awaiting the trickle-down effects.

"The long-term projection is devastating. The level of cuts is so dramatic and so concentrated on non-defense discretionary spending that its ultimate impact will carry on for generations," said Rep. Adam B. Schiff (D-Burbank) during a visit to the Mothers' Club Family Learning Center in Pasadena on Friday.

Others, however, argue that the cuts won't be as drastic or dramatic as some Washington legislators and others are saying. Congress may also avert the cuts by passing a continuing resolution later this month, though no action has been taken yet.

The proposed reductions come on the heels of President Obama's State of the Union address, in which he called on Congress to expand access to high-quality preschool to every child in America.

"Studies show students grow up more likely to read and do math at grade level, graduate high school, hold a job, form more stable families of their own," Obama said during that speech. "So let's do what works and make sure none of our children start the race of life already behind."

If the sequester cuts go through as proposed, more than 2,000 of the 24,000 Head Start seats and dozens of teacher positions in Los Angeles County would be eliminated, according to the L.A. County Office of Education. California stands to lose $78 million in Head Start funding, terminating services for 8,200 children.

It might not seem like much, but "for me, one family is too many," said Hector LaFarga Jr., executive director of Mothers' Club.

Some families have financial challenges or worse, LaFarga said, and "the risk is the family not getting out of the hole they may be in."

Yakelyn Hernandez, a Pasadena mother of two, knows that the cuts won't take that long to affect her.

She enrolled her first-born daughter, Lesly, in Head Start at Mothers' Club and found a community of new parents she could relate to. By the time Bonie was born, Hernandez found out about early Head Start for newborns to 2-year-olds and enrolled her as well.

Every Friday, Hernandez would take her youngest daughter to the parenting class and learn about developmental milestones that children should be able to reach by a certain age. It turned out she needed the information.

"With Bonie, I knew there was something different," Hernandez said. "But at Mothers' Club, they teach you not to be afraid of it."

With guidance and encouragement from the center's staff, Hernandez took Bonie to see a specialist; and the girl was diagnosed with speech apraxia, a developmental verbal disorder. Through the Head Start program, Bonie, now 4, is able to undergo physical and occupational therapy at the center and can communicate using nonverbal methods.

After Bonie's diagnosis, Hernandez's husband was hospitalized and unable to work for nearly a year. When Hernandez was unable to afford day care and without family nearby to help care for the girls, the center helped her find grants to pay rent and attend culinary school on weekends.

"These centers provide a stable environment and expose [preschool children] to a structural format preparing them for school," said Rachelle Pastor Arizmendi, director of early childhood education at the Pacific Asian Consortium for Employment in Los Angeles, which oversees Good Beginnings' operations.

"We understand these cuts have to be made, but [Congress] needs to look at where it makes the most sense to make these cuts," she said.

She anticipates that the reductions would cost her agency $980,000 in federal Head Start funding, eliminating preschool for about 120 of its 2,000 students at 24 locations. Good Beginnings serves 100 students and has a wait list of 150.

"It's easy to look at numbers, but who is going to tell these students they won't be able to come to school?" she said. "These are real lives, families and communities that are being impacted."