LACMA makes a preliminary offer for taking over MOCA. 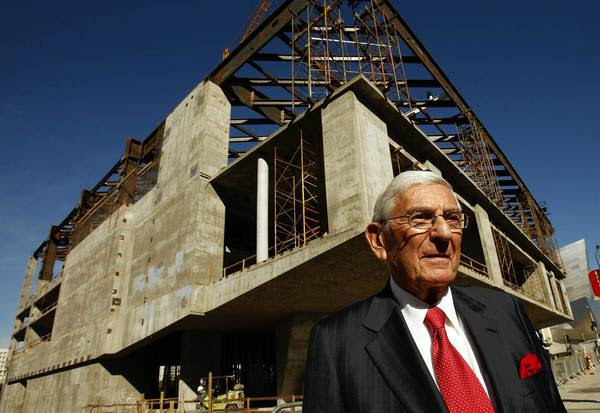 Eli Broad, who is building a museum across from MOCA, agreed in 2008 to give the downtown Los Angeles institution a bailout valued at up to $30 million. (Al Seib / Los Angeles Times / January 8, 2013)

March 7, 2013, 6:05 p.m.  ::  The Los Angeles County Museum of Art has proposed acquiring the troubled Museum of Contemporary Art — a move that would combine the biggest art collection west of the Mississippi with one of the world's most prestigious troves of contemporary art.

The acquisition could put to rest long-standing concerns over the financial viability of the Museum of Contemporary Art, or MOCA. But it also faces potential opposition from the region's most influential art patron, billionaire Eli Broad.

In funding a 2008 MOCA bailout valued at up to $30 million, Broad won a stipulation that MOCA could not be acquired for 10 years by "any museum located within 100 miles of MOCA's Grand Avenue facility," excluding "educational institutions or museums affiliated with educational institutions." Broad declined immediate comment Thursday.

The acquisition offer was made in a letter from the leaders of the Los Angeles County Museum of Art, or LACMA, to the co-chairs of the MOCA board.

LACMA would preserve MOCA's two downtown locations and operate them under the MOCA name. With money an obvious issue for MOCA's future, the letter guaranteed that LACMA would raise $100 million for the combined museums as a condition of the deal.

"MOCA has a great brand, a great history and its art collection is known and loved internationally," Michael Govan, LACMA's executive director, said. "Combining the two museums would create one of the largest and most significant art museums in the U.S."

MOCA officials did not respond to requests for comment.

MOCA has seen the departure of three of its five curators since last June — starting with the forced-resignation of Paul Schimmel, the museum's longtime chief curator. Schimmel had clashed with Jeffrey Deitch, who became director in 2010. Schimmel's departure was soon followed by the resignation of all four artists who sat on MOCA's board.

Deitch was from the start a controversial hire: Museum directors usually come up through the nonprofit curatorial ranks, but he had made his reputation as a successful and adventurous art dealer in New York. But Deitch had little or no background in running a large organization or fundraising for a nonprofit museum.

GRAPHIC: LACMA and MOCA at a glance

At a public forum during an art fair last June, Deitch conceded that he had a "rude awakening" when it came to fundraising, a crucial and time-consuming task for museum directors. He did not return calls for comment Thursday.

John Baldessari, one of the artists who resigned from the board of MOCA last year, supported the possible combination of the two institutions.

"LACMA is an encyclopedic museum, but they are weak when it comes to contemporary art, and this would make their holdings in contemporary art better than the Metropolitan [Museum of Art in New York] in some ways," he said. "So that's pretty exciting."

"The art is the principle thing here, and the people who want to see the art," he said. "The trustees should maximize opportunities for the public to see the art under knowledgeable and competent stewardship, no matter who that might be. LACMA is capable of this, but they're not the only ones capable of doing this."

Mayor Antonio Villaraigosa said in a statement, "I am excited there is a serious desire to merge two signature L.A. institutions that help form the core of the vibrant and rich arts culture" of Los Angeles. "I stand ready to assist in whatever way may be most helpful."

LACMA is a public-private partnership, receiving about 40% of its annual budget from the county. If LACMA were to run and fund MOCA as well, Yaroslavsky said, those added expenses would be shouldered by private donors, so "it will have no impact on the county's financial relationship with LACMA."

The museum's attendance last year reached an all time-high of 1.3 million, compared with MOCA numbers that are typically below 400,000 annually. LACMA has 344 full-time employees, including 34 curators.

smf:  The philanthropy of billionaire philanthropists like Eli Broad – and specifically Eli Broad – are never without complications or strings attached. These gifts must be looked at as investments – and donors like Broad expect a return on their investment.  Historic arts patrons like the Borgias or the millionaires of the gilded age may have wanted to cerebrate the greater glory of God and/or to do penance for sins corporeal and/or venal.

This does not make modern philanthropy bad or evil – just complicated.

Broad’s championship of The Los Angeles High School for the Visual and Performing Arts/aka /Cortines High/aka/ Central High School #9 cost LAUSD far more than Broad gave to fund the design – and his promised support of the school’s operation has never panned out. Broad’s recent work to save MOCA is commendable – but the strings are entangling and the intricacies have snared their share of controversy and column-inches of finger-pointing, vilification and intrigue.

Museums and concert halls and important architecture are educational institutions and monuments to civic culture. They reflect their culture as art reflects its time. The mirror image here is complicated; slightly distorted – and Broad's vision is singular, narrow and self reflective.   Eli’s autobiographical business+pop philosophy book is called The Art of Being Unreasonable.  It isn’t like we weren’t warned.