NO SHAME: Until this moment, Mónica García, I think I never really gauged your cruelty or your recklessness. You have done enough. Have you no sense of decency?

Perspective (from the History of the U.S. Senate/www.senate.gov:

In the spring of 1954, [demagogue/sociopath Senator “Tailgun Joe” Joseph] McCarthy picked a fight with the U.S. Army, charging lax security at a top-secret army facility. The army responded that the senator had sought preferential treatment for a recently drafted subcommittee aide. Amidst this controversy, McCarthy temporarily stepped down as chairman for the duration of the three-month nationally televised spectacle known to history as the Army-McCarthy hearings.

The army hired Boston lawyer Joseph Welch to make its case. At a session on June 9, 1954, McCarthy charged that one of Welch's attorneys had ties to a Communist organization. As an amazed television audience looked on, Welch responded with the immortal lines that ultimately ended McCarthy's career: "Until this moment, Senator, I think I never really gauged your cruelty or your recklessness." When McCarthy tried to continue his attack, Welch angrily interrupted, "Let us not assassinate this lad further, senator. You have done enough. Have you no sense of decency?"

Mónica García’s campaign – her campaign, not some PAC or outside funded organization, mailed out this flyer last week:

It alleges that “Her opponents stand up for predators” and that “they’ll say ANYTHING to beat her.”

“The same powerful organization that stands up for predators is attacking Monica Garcia….”

That organization referred-to must be the California Teacher’s Association and the American Federation of Teachers and UTLA – the teachers' unions in California and LAUSD – they “stood up for predators” because they stood up for teacher’s rights in reasoned opposition to a bill that would allow Monica and her school board majority to fire “bad teachers” without due process. That bill was sponsored by Monica, Deasy + Co. – they wrote it. The bill never even got a vote in the legislature because the votes weren’t there.

Wait! Maybe I’m wrong!! I hate it when that happens.

Maybe the “same powerful organization that stands up for predators” is the California state legislature?

OMG: The conspiracy against Mónica is everywhere!

But I’m pretty sure I’m not wrong about who will say anything to get reelected!

And don’t just keep this in mind – tell your friends – and tell those who might vote for Monica:

…all happened on Monica’s watch as School Board President.

Mónica García is the status quo.

On the front of the flyer is this: 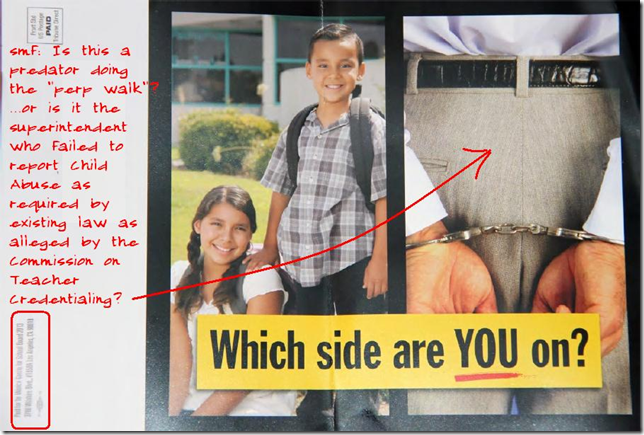 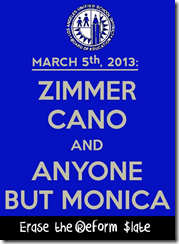