Mayor Antonio Villaraigosa's PAC raised nearly $4 million, much of it from outside interests, on behalf of three school board candidates. But it secured only one seat. 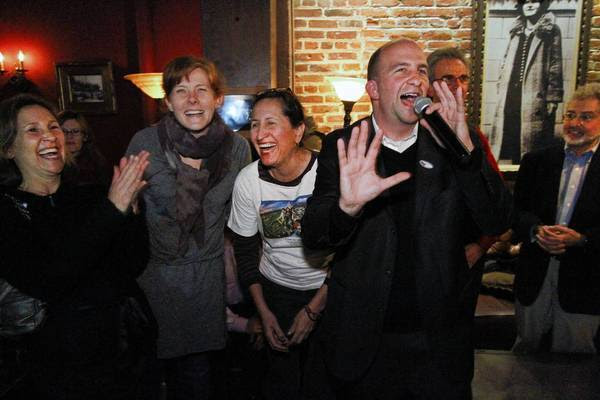 March 6, 2013, 8:15 p.m.  ::  Outside interests poured money into Mayor Antonio Villaraigosa's war chest for this week's school board elections in an attempt to influence education reform here and nationwide. But when the votes were tallied, the group could count only one clear winner.

In the other two races, the Coalition for School Reform lost its bid to unseat incumbent Steve Zimmer, who was backed by the teachers union. The group's other favored candidate, Antonio Sanchez, is headed for a May 21 runoff.

The results were "a loss for the mayor and the future of reform in the district," said former state Sen. Gloria Romero, who is generally allied with Villaraigosa's education agenda.

But American Federation of Teachers President Randi Weingarten summed up Tuesday's election this way: "Big monied interests — most of whom live far away from Los Angeles and virtually none of whom have children in LAUSD schools — were rebuked by parents, teachers and the community."

The costliest race was between Zimmer and attorney Kate Anderson in District 4, which spans the Westside and west San Fernando Valley. There, the mayor's group spent more than $1.5 million on Anderson's behalf. The coalition campaign portrayed one-term incumbent Zimmer as an L.A. Unified insider who voted to fire thousands of teachers and approved a hugely expensive new school.

Taking on Zimmer was "an odd choice," said Charles Kerchner, a professor at Claremont Graduate University. Overall, Zimmer has been the most independent current board member and a "bridge builder," Kerchner said.

Zimmer and the union could not keep pace with the coalition's fundraising, but he was able to turn the tables on the opposition's attack ads.

"Our message is very simple," Zimmer wrote in an email blast just before election day. "Don't believe the lies of March." He exhorted supporters who "have joined our students and their families in resisting this takeover of the board and this assault on our democracy."

Zimmer, who claimed 52% of the vote, said Wednesday that "the willingness to win by any means necessary makes me very sad…They really did try to buy a seat and were pretty brazen about it."

He added that he still intends to cooperate with Supt. John Deasy and Villaraigosa. "This election hasn't changed me."

The coalition's clear victory was in Garcia's District 2, which encompasses downtown and surrounding neighborhoods. The two-term incumbent received 56% of the votes. The teachers union had hoped to push Garcia into a runoff but devoted few resources to that goal.

In all, campaign committees affiliated with United Teachers Los Angeles spent close to $1 million, according to the City Ethics Commission. That included $150,000 from the American Federation of Teachers.

The coalition's coffers included $1 million from New York City Mayor Michael Bloomberg, about $340,000 from the California Charter Schools Assn., $250,000 from an organization led by former District of Columbia schools chancellor Michelle Rhee and $250,000 from a New York-based subsidiary of Rupert Murdoch's News Corp.

Sanchez and Garcia also benefited from financial support from employee unions other than UTLA.

Sanchez, running for the open District 6 seat, in the east San Fernando Valley, finished with 43% of the vote. He'll be in a runoff with Monica Ratliff, who tallied 34%. The teachers union sat out that race.

Former school board member Marlene Canter said that the teachers union managed to divert attention from its own history of using funds to sway school board elections.

"Most of these so-called outsiders have a long-standing interest in improving education and personally stood to gain exactly nothing from the outcome," said Canter. "Their participation simply helps level the playing field."

A debate over the policies of the superintendent — including the use of student test scores as a significant portion of a teacher's evaluation — never really reached voters through the campaigns.

"Most voters never heard about those priorities from [Anderson's] campaign," said Dan Schnur, director of USC's Jesse M. Unruh Institute of Politics. "By drawing her into a more typical political shooting match, Zimmer was able to make the race more about her money than her ideas."

Schnur's brother Jonathan is an education adviser to Bloomberg, but Schnur said neither of them had a role in the New York mayor's L.A. campaign donation.

Deasy said he's ready to move on. He said the contentious election was never an issue between him and Zimmer.

"He and I talk every day," Deasy said. "I didn't experience a divisive relationship whatsoever."