from the wonderful folks who brought you the Phone Hacking Scandal in the UK, Fox News in the US, and gave a quarter-of-a-million-dollars (so far) to Mayor Tony’s School Board Slate PAC. 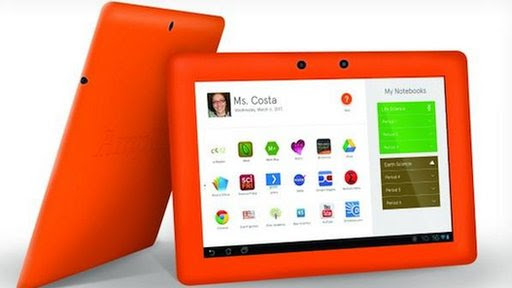 The Amplify tablets come preloaded with a digital curriculum

6 March 2013 Last updated at 08:11 ET  ::  A new tablet for schools has been unveiled by Rupert Murdoch's education group Amplify, reigniting the debate about how children will learn in future.

The $299 (£198) Android device includes learning programs for pupils as well as tools for teachers, allowing them to monitor progress and attendance.

The preloaded software includes content such as the Encyclopaedia Britannica.

The wi-fi enabled tablet, aimed at the US market, faces stiff competition.

News Corp's education unit, along with firms such as Apple and Pearson, is betting on a technology-led educational future and is digitising traditional textbooks and redesigning them for children who have grown up using multimedia devices.

Both parents and teachers will be able to access the educational data collected on the tablets.

For parents it will mean they can see how their child is progressing while teachers will be able to create instant chatrooms for class discussions, keep an eye on who is using tablets for playing games rather than working and take over all the screens in the classroom if necessary.

A slightly more expensive tablet with access to 4G - costing $349 - has been designed for children working from home. The preloaded curriculum will cost $99 for a two-year subscription.

While education experts believe that tablet-led education is likely to become the norm in classrooms, not everyone thinks proprietary systems will be the best way forward.

"Everyone wants to offer proprietary software that will lock education into their system and that just isn't going to happen," said Prof Stephen Heppell, a digital education expert at Bournemouth University.

"The rhetoric in schools now is about bringing your own device. If you have a child with a cutting-edge iPad why say, 'You can't bring that, you have to use this under-powered device we provide'?

"It is as daft as having identical haircuts."

US-based research group The Pew Internet Research Center has suggested that the gulf between children with access to smartphones and tablets and those without is getting larger.

Prof Heppell said his research indicated that there was no need to provide one device for every pupil.

"With a laptop there is one driver and the others are passengers but tablets can be shared between a group of children."

For him the real reason to replace textbooks with tablets in the classroom is that such devices can be used to create, rather than just consume, content.

"I've seen really young kids shooting and editing movies in a way that five years ago would have got them a GCSE," he said.

[The General Certificate of Secondary Education (GCSE) is an academic qualification awarded in a specified subject, generally taken in a number of subjects by students aged 14–16 in secondary education in England, Wales and Northern Ireland. Prior education to GCSE level is generally required of students wishing to pursue A-level courses or the International Baccalaureate.] - Wikipedia

In the UK, the Essa Academy in Bolton has already taken the radical decision to provide all pupils and teachers with iPads.

The Amplify tablet will be officially unveiled at the South By Southwest conference in Austin, Texas