Opinion: HOW I BEAT THE POWERBROKERS IN A SCHOOL BOARD RACE 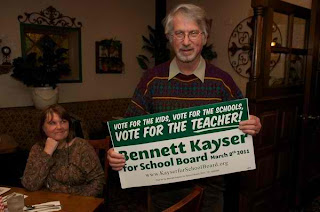 My campaign coffers never topped $35,000. My opponent Luis Sanchez raised more than five times as much. Sanchez also benefited from the generous support of "independent" interests willing to spend millions to promote their agendas. He also had the backing of well-known elected officials. Sanchez had served as chief of staff for the current School Board President Monica Garcia -- who had served as chief of staff for then-board member Jose Huizar who is now a member of the Los Angeles City Council.

Big money, heavy connections and big machine politics are at it again in the up-coming school board race run-off on May 21 to represent east San Fernando Valley. Monica Ratliff is a teacher, and that's almost like being Satan to many of the very rich "reformers" willing to make mega-contributions. In this contest, Antonio Sanchez has big financial backers and connections. That's no surprise because he used to work for Los Angeles Mayor Antonio Villaraigrosa, who has plenty of rich friends who care passionately, or so they say, about the students of the Los Angeles Unified School District.

Why is New York Mayor Michael Bloomberg reaching deep into his pockets to support candidates for the Los Angeles School Board? Shouldn't he focus on the New York City schools that still need major improvements? Why does Michelle Rhee, the former superintendent of the Washington D.C. public schools or the other outsiders willing to write huge checks care about our public schools? Let's call these self-proclaimed "reformers" what they really are -- reactionaries.

No matter how they pay to spin it, the b/millioniares are quite content to allow a two-tiered education system with more for the haves and much less for the have-nots. Would they be willing to send their children to a neighborhood school in LAUSD, or to a public school near their mansions? Want to make a bet? My children attended Ivanhoe Elementary School, 32nd Street Elementary School, the Open School, King Middle School and John Marshall High School. While their kids attend $50,000 a year schools, California students sit at 49th in the nation at $5,266 per student, the cost of a night out for some of these one-percenters.

Why should we believe that billionaires such as Eli Broad, Jerry Perenchio, Bill Gates, and the Walmart heirs know best about how to improve the education of the children of Watts, or Pacoima or South Gate? Their drive-by visits to classrooms and photo opportunities at schools do not make them experts, nor do they reveal the challenges overcome by our teachers and principals -- the miracle workers of LAUSD.

Yes, the Los Angeles Unified School District needs better schools and more resources to help all of our students meet or exceed their potential. That is why I became a teacher so many years ago. That is also why I ran for the Los Angeles School Board.

During the recent primary, Antonio Sanchez is estimated to have raised more than $100,000 and got more than $1.5 million in TV ads and mailers from "independent expenditures." He garnered 13,087 votes. Monica Ratliff raised about $18,000 and got nothing from the so-called independents. She got 10,351 votes.

Money may be the mother's milk of politics -- a cliche no decent English teacher would allow a student to use in an essay -- but fortunately votes can't be bought outright, and the big money doesn't automatically prevail.