It's no surprise that parents go to great lengths to get their children into the coveted classrooms. But other campuses suffer a loss from such lopsided enthusiasm. 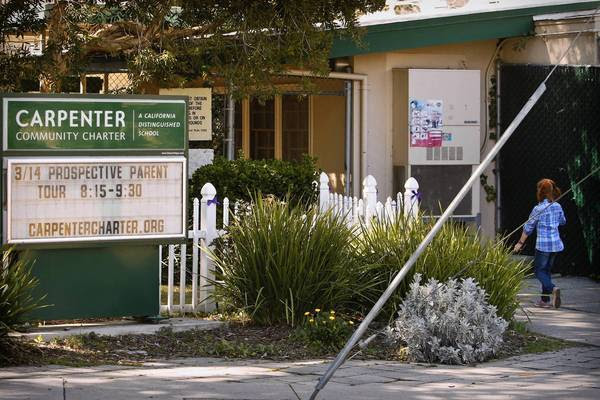 Carpenter Community Charter has almost 1,000 students, a waiting list and a controversy over parents who lie about their addresses to get their children in. But a generation ago, fewer than 50 of Carpenter’s 450 students were from the neighborhood; most were bused in. (Ricardo DeAratanha / Los Angeles Times / March 11, 2013)

March 22, 2013, 6:30 p.m.  ::  You could say that Carpenter Elementary in Studio City owes its survival to students from other neighborhoods.

A generation ago, their presence kept the campus from being shut down, after local families fled to private schools to avoid Los Angeles Unified's mandatory busing program. By the time busing ended in 1981, fewer than 50 of Carpenter's 450 students were children from the neighborhood.

Former Principal Joan Marks spent years going door-to-door, luring locals back with the promise of a school they could be proud of.

Today Carpenter Community Charter has almost 1,000 students. There's a lottery and a waiting list — and brewing resentment over the suspicion that children from other communities are using fake addresses to attend, filling seats that ought to belong to neighborhood children.

The school has so many students now, there may not be room next fall for all of Studio City's kindergartners. "We'll be putting local kids on buses," said Principal Joseph Martinez, "if we don't get this sorted out."

What a turnaround from a time when most of its students were bused in.

Times reporter Stephen Caesar wrote about the school's dilemma this month, as Carpenter launched a crackdown to root out families who lied about living within the school's attendance boundaries.

Martinez said preliminary checks suggest that one in 10 Carpenter families may be claiming a false address.

"I totally get why people would do anything to get their child into Carpenter," the principal said. Its test scores are among the district's highest. It offers a palette of enrichment classes that many private schools can't match.

That's the product of decades of community investment, he said. "This is a school that was supposed to close. The community got involved and kept it going."

"Those are not things the school district paid for, but the local residents provided," Martinez said. The school's booster club raises about $300,000 each year. "This community is very proud of that. Residents have a sense of ownership here."

And if you're not a resident and want to attend? Take your chances in the enrollment lottery. Or pony up about $1.5 million, the price tag on an average local home.

Carpenter is one of few Los Angeles Unified schools with the power to drive real estate prices up. "To live within the boundaries of Carpenter Charter School in Studio City … is to be the envy of your neighbor," promises a local real estate website.

And if you can't live within those boundaries, you might be able to pretend. Martinez spotted two posts on Craigslist from residents offering to sell their addresses to parents trying to fake their way in.

There's a sort of mythology around elementary schools like this — Ivanhoe in Silver Lake and Wonderland in Hollywood are others — that attracts ambitious young parents, gets everyone donating and volunteering, and makes families at less-spectacular schools wonder what they're missing.

Part of what accounts for Carpenter's high achievement is not mysterious at all. It's not burdened with social and economic problems. Its demographic profile is nothing like a typical Los Angeles school.

Carpenter is 78% white in a district that is 73% Latino. Only 7% of its students are from families poor enough to qualify for free lunch; three-quarters of district students are. And only 5% of its pupils don't speak English, in a district where one-third of students aren't fluent English speakers.

But parents insist that something less tangible is more important to its success. "It's the sense of community," said Rebecca Silverstein, whose two children — Milo, 9, and Poppy, 6 — raved about their teachers and their campus.

I interviewed them as they walked home from the school with its white picket fence, along one of the narrow streets winding up into the Hollywood Hills.

The school and the community have "a small-town feel," Silverstein said. "You go to school with your neighbors. Your children play on the same sports teams. You go to a school event and see the family that lives next door."

But that's an advantage you can't re-create when you're secretly trucking your children in from Van Nuys or Woodland Hills.

Silverstein doesn't want to bad-mouth parents who use a friend's address, or rent an apartment for a few months so they can produce the proof they need to get their child enrolled.

"I mostly feel bad that other parents have to do that," she said. "It's a shame that some of the public schools aren't good enough, that you would have to go to those lengths to get a good education for your child."

But Principal Martinez said many parents are incensed. Some wanted a hotline to report offenders. Others emailed anonymously, ratting out children's classmates.

The practice of faking residency isn't new, of course. My daughters attended Granada Hills Charter High just after it went charter 10 years ago. So many tips came in about families lying to enroll, school employees sometimes resorted to following students home, questioning neighbors or interviewing landlords.

"Nine of 10 times, when information is presented, the families admit 'That's not where we're living.' And they're terribly embarrassed, very ashamed," said Granada Hills' executive director, Brian Bauer. "It's a bit of a sad state, the few options that families feel they have."

When families flock to those superstar schools, that's a loss to the schools they leave behind. So the good get better, but the district gets more lopsided over time.

"If people are that motivated to do all these things to enroll a child in a school that's not in their neighborhood," Carpenter's Martinez said, "just imagine if they put that energy in their local school and got involved to make change happen there."